A schematic drawing of the 2-2-2 steam locomotive wheel arrangement. 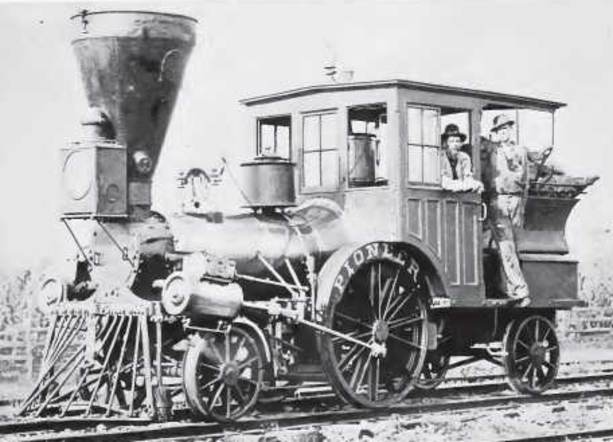 2-2-2 "Single" or "Jenny Lind" Steam Locomotive
Under the Whyte notation for the classification of steam locomotives, 2-2-2 represents the wheel arrangement of two leading wheels on one axle, two powered driving wheels on one axle, and two trailing wheels on one axle. The wheel arrangement both provided more stability and enabled a larger firebox than the earlier 0-2-2 and 2-2-0 types. This configuration was introduced in 1834 on Robert Stephenson's 'Patentee locomotive' but it was later popularly named Jenny Lind, after the Jenny Lind locomotive which in turn was named after the popular singer. They were also sometimes described as Singles, although this name could be used to describe any kind of locomotive with a single pair of driving wheels.

Sharp, Roberts and Company constructed more than 600 2-2-2 locomotives between 1837 and 1857. Ten of these supplied to the Grand Junction Railway became the basis of Alexander Allan's successful designs for the railway from 1845 (the first of which, formerly named Columbine, is preserved). J. & G. Rennie supplied 2-2-2 locomotives to the London and Croydon Railway from 1838 and the London and Brighton Railway in 1840. Arend ("eagle") was one of the two first steam locomotives in the Netherlands, built by R. B. Longridge and Company of Bedlington, Northumberland in 1839.

The Great Western Railway continued to order both broad gauge and standard gauge locomotives on the railway, including the Firefly and Sun classes (1840–42), which were enlarged versions of North Star. Bury, Curtis, and Kennedy supplied six 2-2-2 locomotives to the Bristol and Gloucester Railway in 1844, and fourteen to the Great Southern and Western Railway in Ireland in 1848, (the last of these has been preserved at Cork Kent railway station.

The Jenny Lind locomotive, designed by David Joy and built in 1847 for the London Brighton and South Coast Railway by the E.B.Wilson and Company of Leeds, became the basis of hundreds of similar passenger locomotives built during the 1840s and 1850s by this and other manufacturers for UK railways. The London & North Western Railway "Cornwall" locomotive was designed at Crewe Works as a 4-2-2 by Francis Trevithick in 1847, but was rebuilt as a 2-2-2 in 1858.