2-6-0 Mogul Steam Locomotive
Under the Whyte notation for the classification of steam locomotives, 2-6-0 represents the wheel arrangement of two leading wheels on one axle, usually in a leading truck, six powered and coupled driving wheels on three axles and no trailing wheels. This arrangement is commonly called a Mogul.

In the United States of America (USA) and Europe, the 2-6-0 wheel arrangement was principally used on tender locomotives. This type of locomotive was widely built in the USA from the early 1860s to the 1920s.

Although examples were built as early as 1852–53 by two Philadelphia manufacturers, Baldwin Locomotive Works and Norris Locomotive Works, these first examples had their leading axles mounted directly and rigidly on the frame of the locomotive rather than on a separate truck or bogie.[2] On these early 2-6-0 locomotives, the leading axle was merely used to distribute the weight of the locomotive over a larger number of wheels. It was therefore essentially an 0-8-0 with an unpowered leading axle and the leading wheels did not serve the same purpose as, for example, the leading trucks of the 4-4-0 American or 4-6-0 Ten-Wheeler types which, at the time, had been in use for at least a decade.

The first American 2-6-0 with a rigidly mounted leading axle was the Pawnee, built for heavy freight service on the Philadelphia and Reading Rail Road. In total, about thirty locomotives of this type were built for various American railroads. While they were generally successful in slow, heavy freight service, the railroads that used these first 2-6-0 locomotives didn't see any great advantages in them over the 0-6-0 or 0-8-0 designs of the time. The railroads noted their increased pulling power, but also found that their rather rigid suspension made them more prone to derailments than the 4-4-0 locomotives of the day. Many railroad mechanics attributed these derailments to having too little weight on the leading truck.

The first true 2-6-0s were built in the early 1860s, the first few being built in 1860 for the Louisville and Nashville Railroad. The new design required the utilization of a single-axle swiveling truck. Such a truck was first patented in the United Kingdom by Levi Bissell in May 1857.

In 1864, William S. Hudson, then the superintendent of Rogers Locomotive and Machine Works, patented an equalized leading truck that was able to move independently of the driving axles. This equalized suspension worked much better over the uneven tracks of the day. The first locomotive built with such a leading truck was likely completed in 1865 for the New Jersey Railroad and Transportation Company as their number 39.

It is likely that the locomotive class name derives from a locomotive named Mogul, built by Taunton Locomotive Manufacturing Company in 1866 for the Central Railroad of New Jersey. However, it has also been suggested that, in England, it derived from the engine of that name built by Neilson and Company for the Great Eastern Railway in 1879.

United States
The first true 2-6-0s with single-axle swiveling leading trucks were built in the United States in 1860 for the Louisville and Nashville Railroad. The New Jersey Locomotive and Machine Company built their first 2-6-0 in 1861, as the Passaic for the Central Railroad of New Jersey. The Erie Railroad followed in 1862 with the first large order of this locomotive type. In 1863, Rogers Locomotive and Machine Works built more for the New Jersey Railroad and Transportation Company.

The Baltimore and Ohio Railroad (B&O) no. 600, a 2-6-0 Mogul built at the B&O's Mount Clare Shops in 1875, won first prize the following year at the 1876 Centennial Exposition in Philadelphia. It is preserved at the B&O Railroad Museum, housed in the former Mount Clare shops in Baltimore.

Well over 11,000 Moguls were constructed in the United States by the time production had ended in 1910. Very few of these classic steam locomotives still exist, most of them having been scrapped as newer, faster and more powerful steam engines were developed in the twentieth century. The USRA standard designs of 1914 did not include a 2-6-0.

Five notable 2-6-0 locomotives are still in operation in the United States:

Ex Southern Pacific Lines No. 1744 still operated on the Heber Valley Historic Railroad in 1982.
Ex New Berlin & Winfield Railroad No. 2, built by the Baldwin Locomotive Works in 1906, was rebuilt and is maintained by the Midwest Central Railroad.
Walt Disney World Railroad No. 2 Lilly Belle, built in September 1928 by the Baldwin Locomotive Works as no. 260 for the Ferrocarriles Unidos de Yucatán in Mexico, operates on the railroad circling the Magic Kingdom in Orlando, Florida since 1 October 1971.
Ex Canadian National no. 89 operates in excursion service on the Strasburg Rail Road.
Everett Railroad no. 11 operates tourist trains on the Hollidaysburg, PA based shortline.

Canada
A large number of 2-6-0 locomotives were used in Canada, where they were considered more usable in restricted spaces, being shorter than the more common 4-6-0 Ten-Wheelers. The Canadian National Railway (CN) had several.[5] One of them, the CN no. 89, an E-10-a class locomotive built by Canadian Locomotive Company in 1910, has been owned and operated since 1972 by the Strasburg Rail Road in Pennsylvania in the USA, in conjunction with the Railroad Museum of Pennsylvania.
A good preserved version, the White Pass and Yukon Railroad no. 51, can be found at the MacBride Museum of Yukon History in Whitehorse, Yukon.

Diagram of the 2-6-0: a single small leading wheel, and three driving wheels joined by coupling rods. Front of locomotive at left. 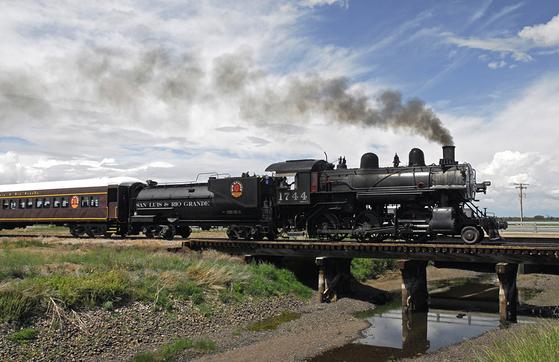