Chesapeake and Ohio Railway 2-6-6-6 Allegheny No 160. Currently on display at The Henry Ford Museum, Dearborn, Michigan.

This is an episode of the B&O Railroad Museum TV with host Michael Gross, and featuring the 2-6-6-6 Allegheny.

Lima 2-6-6-6 Allegheny Articulated Steam Locomotive
The 2-6-6-6 (in Whyte notation) is an articulated locomotive type with 2 leading wheels, two sets of six driving wheels and six trailing wheels. Only two classes of the 2-6-6-6 type were built. One was the "Allegheny" class, built by the Lima Locomotive Works. The name comes from the locomotive's first service with the Chesapeake and Ohio Railway beginning in 1941. The other was the "Blue Ridge" class for the Virginian Railway. These were one of the most powerful reciprocating steam locomotives ever built at 7,500 HP (which was only exceeded by the PRR Q2), and one of the heaviest at 389 tons for the locomotive itself plus 215 tons for the loaded tender.

History
Two classes of 2-6-6-6 locomotives were built; the sixty H-8 "Allegheny" class locomotives for the Chesapeake and Ohio Railway (C&O) between 1941 and 1948, and the eight AG "Blue Ridge" class locomotives for the Virginian Railway in 1945. (The locomotives were Series AG on the Virginian, which was thought to be an abbreviation for Allegheny, but that referred to their being Articulated, Series G.) All were built by the Lima Locomotive Works. The "Allegheny" name refers to the C&O locomotives' job of hauling coal trains over the Allegheny Mountains.

Though it was apparent to knowledgeable people in the railroad industry that reciprocating piston driven steam locomotives might soon be replaced by diesel power, Lima and C&O set out to build the ultimate in high power steam locomotives and they succeeded. No diesel engine ever surpassed the output of these giants, which were the heaviest steam locomotives ever constructed (by engine-only weight). The three-axle trailing truck supporting the firebox was unusual, carrying over 190,000 lbs, allowing the huge firebox needed for the high power. As it turned out, steam locomotives continued in service for almost another 20 years.

The locomotive was built to power coal trains on the 0.57% eastward climb from White Sulphur Springs, WV to Allegheny, VA. With one at the front and another at the back, 11,500-ton coal trains left Hinton, WV and were at full throttle from White Sulphur Springs (a resort) to the top. C&O's 2-6-6-6s also handled coal trains from West Virginia to Columbus, Ohio. Huddleston says that 23 locomotives were equipped with steam piping for heating passenger trains.

Multiple unit operation in the diesel era removed the need to pack the highest horsepower in a single unit. The H-8's 80,000+ pound axle load demanded heavy rail and track structure.

One H-8, the 1642, suffered a crown sheet failure and subsequent boiler explosion at Hinton, WV in June, 1953. The force of the explosion rocketed the boiler endwise off the running gear, sadly killing all three crew. While these locomotives had two sources of water for the boiler, a steam turbine pump-fed Worthington hot pump and one injector, it is not known whether any were defective at the time of dispatch. According to the family of the locomotive's engineer, Wilbur H. Anderson, of Hinton, previous crews had complained of a faulty water level gauge. Anderson's widow, Georgia Anderson, was given $10,000 in compensation by the C&O.

Preservation
There are only two surviving Alleghenies. Upon retirement in 1956, 1601 was donated to The Henry Ford museum in Dearborn, Michigan where it has been on display indoors since. 1604 was initially sent to C&O's scrap lines behind their diesel shops at Russell, Kentucky. It was then donated to the Virginia Museum of Transportation in Roanoke circa 1969 where it was displayed next to N&W 1218. On November 4th, 1985, it was partially damaged by a flood, which washed away the ground under it and nearly turned the locomotive over. In 1987, parent company Norfolk Southern did a cosmetic overhaul on it at their Roanoke Shops before it was sent to Baltimore to be displayed as the centerpiece of the then Mount Clare Junction shopping center which was adjacent to the B&O Railroad Museum. In 1989, the shopping center donated it to the museum, where it presently resides. 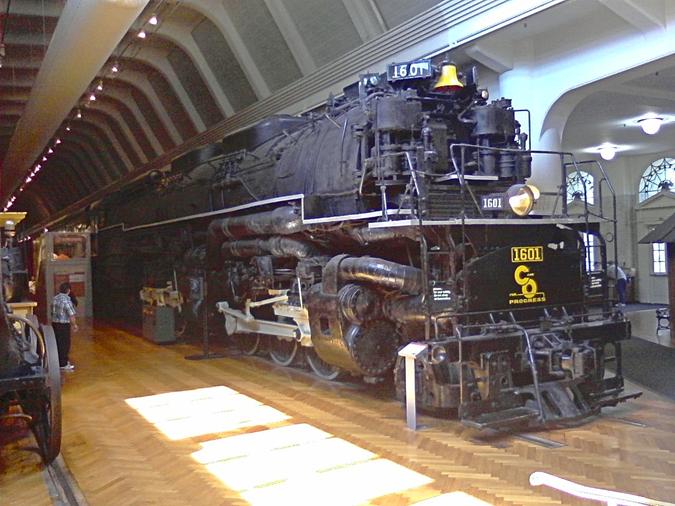