By gordon hunter from Nanaimo, BC, Canada [CC BY-SA 2.0 (http://creativecommons.org/licenses/by-sa/2.0)], via Wikimedia Commons 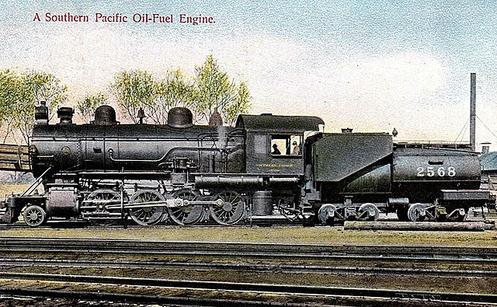 2-8-0 "Consolidation" Steam Locomotive
Under the Whyte notation for the classification of steam locomotives, 2-8-0 represents the wheel arrangement of two leading wheels on one axle, usually in a leading truck, eight powered and coupled driving wheels on four axles and no trailing wheels. In the United States and elsewhere, this wheel arrangement is commonly known as a Consolidation.

Of all the locomotive types that were created and experimented with in the 19th century, the 2-8-0 was a relative latecomer.

The first locomotive of this wheel arrangement was possibly built by the Pennsylvania Railroad (PRR). Like the first 2-6-0s, this first 2-8-0 had a leading axle that was rigidly attached to the locomotive's frame, rather than on a separate truck or bogie. To create this 2-8-0, PRR master mechanic John P. Laird modified an existing 0-8-0, the Bedford, between 1864 and 1865.

The 2-6-0 Mogul type, first created in the early 1860s, is often considered as the logical forerunner to the 2-8-0. However, a claim is made that the first true 2-8-0 engine evolved from the 0-8-0 and was ordered by the United States' Lehigh and Mahanoy Railroad, which named all its engines. The name given to the new locomotive was Consolidation, the name that was later almost globally adopted for the type. According to this viewpoint, the first 2-8-0 order by Lehigh dates to 1866 and antedates the adoption of the type by other railways and coal and mountain freight haulers.

From its introduction in 1866 and well into the early 20th century, the 2-8-0 design was considered to be the ultimate heavy-freight locomotive. The 2-8-0's forte was starting and moving "impressive loads at unimpressive speeds" and its versatility gave the type its longevity. The practical limit of the design was reached in 1915, when it was realised that no further development was possible with a locomotive of this wheel arrangement.

As in the United States, the 2-8-0 was also a popular type in Europe, again largely as a freight hauler. The type was also used in Australia, New Zealand, and Southern Africa.

United States
In the United States, only a few railroads purchased Consolidation types when Baldwin Locomotive Works first introduced its version. Even the Baltimore & Ohio railroad, which eventually had nearly 180 2-8-0 locomotives in regular service by 1885, did not purchase any of this type until 1873. The Buffalo, Rochester and Pittsburgh Railway, which eventually became part of B&O, purchased 15 of this type from Brooks Locomotive Works in 1883.

The 2-8-0 design was given a major boost in 1875, when the Pennsylvania Railroad made it their standard freight locomotive, and 1875 was also when the Erie Railroad began replacing its 4-4-0s in freight service with 2-8-0s. The railroads had found that the 2-8-0 could move trains twice as heavy at half the cost of its predecessors. From a financial standpoint at the time, the choice of the 2-8-0 as new freight locomotive was therefore clear.

The S160 Class of the United States Army Transportation Corps was built by American manufacturers and was designed for use in Europe for heavy freight work during the Second World War. A total of 2,120 of this class was built and they worked on railroads across the world. Production of the 2-8-0 type in the United States totaled more than 23,000 locomotives, of which 12,000 were export versions.

Preservation
Southern Pacific No. 895, a 2-8-0 Consolidation locomotive built by ALCO in 1913 is on static display at Roseland Park in Baytown, Texas. SP No. 895 was retired after 44 years of service and donated by Southern Pacific Railroad to the Robert E. Lee High School Key Club, then towed on temporary tracks to its current location at Roseland Park in April, 1957.

One of B&O's 2-8-0 Consolidations, built in 1888, is preserved at the B&O Railroad Museum in Baltimore, Maryland.

Southern Pacific's No. 2562
The Southern Pacific Railroad's locomotive no. SP 2562 was built by the Baldwin Locomotive Works in 1909, serial No. 29064. It is on exhibit in the Arizona Railway Museum in Chandler, Arizona. The locomotive and its tender are listed in the National Register of Historic Places, reference No. 09000511.

The Atchison, Topeka, and Santa Fe Railroad's class 759 locomotive no. 761 was built around 1890. When active, it was used on the railroad's mainline between Chicago and the west. No. 761 is permanently on display next to the historic Wickenburg, Arizona, train depot that is now the town's visitor center.

The Colorado & Southern (C&S) narrow-gauge no. 60 is on display in Idaho Springs, Colorado, while C&S No. 71 is in Central City, Colorado.

A Ks1 class 2-8-0, no. 630, is run and maintained in Chattanooga, Tennessee, by the Tennessee Valley Railroad Museum. In 2014, this locomotive participated in the Norfolk Southern 21st Century Steam program.

Baldwin Steam Locomotive no. 1702, built in 1942 for the United States Army, was purchased by the Great Smoky Mountains Railroad (GSMR) of Bryson City, North Carolina, in the mid-1990s for use on its scenic railway excursions. After a decade of service, No. 1702 was retired in 2004. In October 2012, a partnership formed between GSMR and Swain County to provide funding to restore the locomotive. In 2013, a complete restoration was launched and the locomotive returned to service during summer 2016.

Canada
The Canadian Pacific Railway (CP) N-2-a, b, and c class locomotives were a class of altogether 182 Consolidation type locomotives, built by Montreal Locomotive Works between 1912 and 1914. They were numbered in the range from 3600 to 3799 and were used almost everywhere around the system. The order for these engines came about when CP needed bigger locomotives for their mainline since their current engines were wearing out and were too small for the loads that were being hauled. Most of the class were converted to oil-firing in later years. One of the locomotives, No. 3716, is in running order and is maintained in Summerland, BC as part of the Kettle Valley Steam Railway. 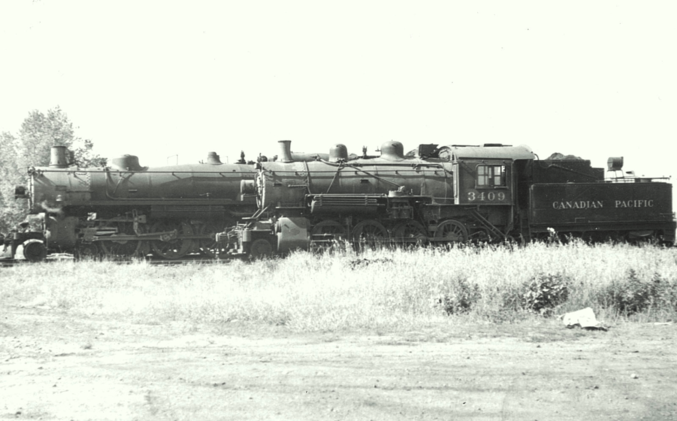 Diagram of the 2-8-0 Wheel Arrangement: one small leading wheel, and four large driving wheels joined by a coupling rod. Front of locomotive at left.