At times it was also referred to on some railroads in the United States of America as the McAdoo Mikado and, during the Second World War, the MacArthur.

The notation 2-8-2T indicates a tank locomotive of this wheel arrangement, the “T” suffix indicating a locomotive on which the water is carried in side-tanks mounted on the engine rather than in an attached tender.

The 2-8-2 wheel arrangement allowed the locomotive's firebox to be placed behind instead of above the driving wheels, thereby allowing a larger firebox that could be both wide and deep. This supported a greater rate of combustion and thus a greater capacity for steam generation, allowing for more power at higher speeds. Allied with the larger driving wheel diameter which was possible when they did not impinge on the firebox, it meant that the 2-8-2 was capable of higher speeds than a 2-8-0 with a heavy train. These locomotives did not suffer from the imbalance of reciprocating parts as much as did the 2-6-2 or the 2-10-2, because the center of gravity was between the second and third drivers instead of above the center driver.

The first 2-8-2 locomotive was built in 1884. It was originally named Calumet by Angus Sinclair, in reference to the 2-8-2 engines built for the Chicago & Calumet Terminal Railway (C&CT). However, this name did not take hold.

The wheel arrangement name "Mikado" originated from a group of Japanese type 9700 2-8-2 locomotives that were built by Baldwin Locomotive Works for the 3 ft 6 in (1,067 mm) gauge Nippon Railway of Japan in 1897. In the 19th century, the Emperor of Japan was often referred to as "the Mikado" in English. Also, the Gilbert and Sullivan opera The Mikado had premiered in 1885 and achieved great popularity in both Britain and America.

The 2-8-2 was one of the more common configurations in the first half of the 20th century, before dieselization. Between 1917 and 1944, nearly 2,200 of this type were constructed by the American Locomotive Company (ALCO), Lima Locomotive Works and Baldwin, based on designs by the United States Railroad Administration (USRA). It was also known as the "McAdoo Mikado" in the United States, after William Gibbs McAdoo who was appointed as Director General of Railroads when the United States commenced hostilities during the latter part of the First World War and the USRA was established. Of all of the USRA designs, the Mikado proved to be the most popular. The total American production was about 14,000, of which 9,500 were for local customers and the rest exported.

"Mikado" remained the type name until the attack on Pearl Harbor in 1941. Seeking a more American name, "MacArthur" came into use to describe the locomotive type in the United States, after General Douglas MacArthur. After the war, the type name "Mikado" again became the most common for this locomotive type.

Locomotives of this wheel arrangement saw service on all six populated continents. The 2-8-2 type was particularly popular in North America, but was also used extensively in Continental Europe and elsewhere.

The Canadian Pacific (CP) used Mikado locomotives for passenger and freight trains throughout Canada. Most worked in the Rocky Mountains, where the standard 4-6-2 Pacifics and 4-6-4 Hudsons could not provide enough traction to handle the steep mountain grades.

A preserved Mikado is the CP’s no. 5468, on display in Revelstoke, British Columbia.

United States
The 2-8-2 saw great success in the United States, mostly as a freight locomotive. In the second decade of the 20th century, it largely replaced the 2-8-0 Consolidation as the main heavy freight locomotive type. Its tractive effort was similar to that of the best 2-8-0s, but a developing requirement for higher speed freight trains drove the shift to the 2-8-2 wheel arrangement.

The Mikado type was, in turn, ousted from the top-flight trains by larger freight locomotive wheel arrangements such as the 2-8-4, 2-10-2, 2-10-4 and articulated locomotives, but no successor type became ubiquitous and the Mike remained the most common road freight locomotive with most railroads until the end of steam. More than 14,000 were built in the United States, about 9500 of these for North American service, constituting about one-fifth of all locomotives in service there at the time. The heaviest Mikados were the Great Northern’s class O-8, with an axle load of 81,250 pounds (36,854 kilograms) .Almost all North American railroads rostered the type, notable exceptions being the Boston and Maine, the Delaware and Hudson, the Cotton Belt and the Norfolk and Western. The largest users included the New York Central with 715 locomotives, the Baltimore and Ohio with 610, the Pennsylvania Railroad with 579, the Illinois Central with 565, the Milwaukee Road with 500 and the Southern with 435.

Diagram of the 2-8-2 Wheel Arrangement: one small leading wheel, four large driving wheels joined by a coupling rod, and one small trailing wheel. 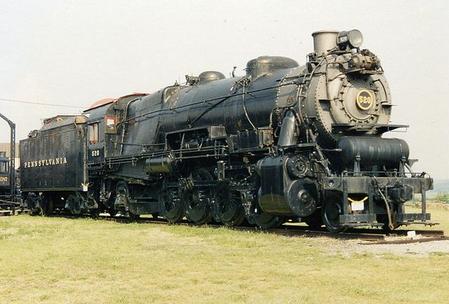 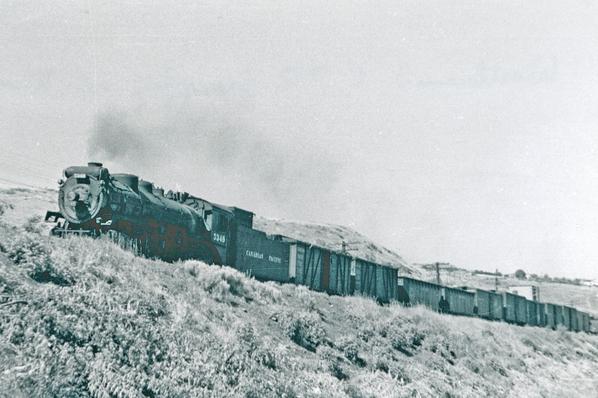