2-8-4 Steam Locomotive
Under the Whyte notation, a 2-8-4 is a steam locomotive that has one unpowered leading axle, usually in a leading truck, followed by four powered and coupled driving axles, and two unpowered trailing axles, usually mounted in a truck. This locomotive type is most often referred to as a Berkshire, though the Chesapeake and Ohio Railway used the name Kanawha for their 2-8-4s. In Europe, this wheel arrangement was mostly seen in mainline passenger express locomotives and, in certain countries, in tank locomotives.

n the United States of America, the 2-8-4 wheel arrangement was a further development of the enormously successful United States Railroad Administration (USRA) 2-8-2 Mikado. It resulted from the requirement for a locomotive with even greater steam heating capacity. To produce more steam, a solution was to increase the size of the locomotive's firebox, but the 2-8-2 wheel arrangement with its single axle trailing truck limited the permissible increased axle loading from a larger firebox. The most practical solution was to add a second trailing axle to spread the increased weight of a larger firebox.

The first American 2-8-4s were built for the Boston and Albany Railroad in 1925 by Lima Locomotive Works. The railroad's route across the Berkshire mountains was a substantial test for the new locomotives and, as a result, the name Berkshire was adopted for the locomotive type.

United States
Locomotives of a 2-8-4 wheel arrangement were used mainly for hauling fast express freight trains on heavy freight service. They often replaced older 2-8-2 Mikados where more power was required. In turn, they were often replaced by even more powerful 2-10-4 Texas type locomotives.

Six years after the Atchison, Topeka and Santa Fe Railway experimented with the first 2-10-4, the first 2-8-4s were built for the Boston & Albany (B&A) by Lima Locomotive Works in 1925. The railroad's route over the Berkshires was a substantial test for the new locomotives, but the type proved its worth, outpacing the 2-8-2 Mikados already in use there. This mountain range lent its name to the locomotive type, though the Chesapeake and Ohio Railway preferred the name Kanawha for their 2-8-4s. Buoyed by the success of the demonstrations on the B&A, Lima and ALCO both sold a few hundred of the new locomotive type.

The Berkshire type's big boost came in 1934, when the New York, Chicago and St. Louis Railroad (Nickel Plate Road or NKP) received its first 2-8-4s, built to a new design from the Advisory Mechanical Committee (AMC) of the Van Sweringen empire. Under the Van Sweringen umbrella were the Nickel Plate Road, Erie Railroad, Chesapeake and Ohio Railway and Pere Marquette Railway. The AMC's design generated 64,100 pounds-force (285 kilonewtons) of tractive effort and became the standard design for subsequent Berkshires. The Erie Railroad purchased the largest number of 2-8-4s, rostering 105.

Lima's last steam locomotive was also the last American 2-8-4, the NKP's No. 779 of 1949. Some 700 2-8-4s were built for American service, constituting 2% of the steam fleet prior to dieselization and delivering 5% of the nation's freight ton-miles.

As the first large scale user, the NKP became synonymous with the Berkshire locomotive type. One of this class, Nickel Plate no. 765, is preserved in operating condition and is operated occasionally from its New Haven, Indiana home. Nickel Plate no. 779 is preserved as a static display in Lincoln Park in Lima, Ohio.

Many larger American railroads rostered Berkshires. The list below shows data on the American 2-8-4 locomotives as they were built.

Berkshires in fiction
In the motion picture The Polar Express, the "know-it-all" boy identifies the train's locomotive as a Baldwin 2-8-4 built in 1931, although the actual prototype for the film's locomotive was the Pere Marquette no. 1225, a Berkshire built by the Lima Locomotive Works in 1941.

In the Transformers television series, motion picture and toy line, the Decepticon triple changer Astrotrain is modeled on a Japanese Class D62 2-8-4 locomotive.

Locomon in the motion picture Digimon: Runaway Locomon is a 2-8-4 type locomotive. 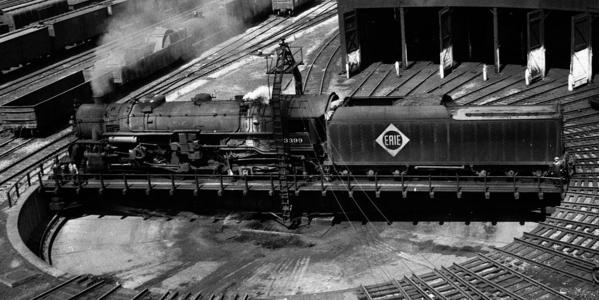