2-8-8-2 Articulated Steam Locomotive
A 2-8-8-2, in the Whyte notation for describing steam locomotive wheel arrangements, is an articulated locomotive with a two-wheel leading truck, two sets of eight driving wheels, and a two-wheel trailing truck. The equivalent UIC classification is, refined to Mallet locomotives, (1'D)D1'. These locomotives usually employ the Mallet principles of articulation—with the rear engine rigidly attached to the boiler and the front engine free to rotate—and compounding. The 2-8-8-2 was a design largely limited to American locomotive builders. The last 2-8-8-2 was retired in 1962 from the N&W's roster, 2 years past the ending of steam though steam was still used on steel mill lines and other railroads until 1983.

The first 2-8-8-2 was built in 1909 by Baldwin, who sold two to the Southern Pacific Railroad (classified MC-1), and then three each to the Union Pacific Railroad and UP-owned Oregon Railroad and Navigation Company. Baldwin conceived the type as an expansion of the 2-6-6-2 permitting a greater tractive effort.

The next order for the type was from the Southern Pacific; these differed in being cab forward locomotives, so that the crew could have better visibility and breathing in the SP's long tunnels and snow sheds. They were very successful, and SP continued to order cab-forward locomotives, building an eventual fleet of 256 of numerous classes; later cab-forwards were 4-8-8-2s.

The 2-8-8-2 proved itself to be a capable hauler on mountain grades, enabling the replacement of several smaller locomotives and hauling longer trains than before. Most of them were not fast; they hauled at drag freight speeds, up to 25 mph (40 km/h). However, the Norfolk & Western Y6 class were designed to run up to 55 mph (89 km/h). The locomotives were adopted by a broad spectrum of mountain railroads, including the Norfolk & Western, Southern, Virginian, Great Northern, Clinchfield, Denver & Rio Grande, Reading, Western Maryland, Missouri Pacific, Frisco, and the Duluth, Missabe and Iron Range Railway. On many railroads, the locomotives of the type were the most powerful on the roster. When built, the 2-8-8-2s of the Western Pacific Railroad were among the most powerful steam locomotives in the world and formed the basis for the later 2-8-8-4 "Yellowstone" type engines used by the Duluth, Missabe and Iron Range.

The very last compound Mallet locomotives to operate on major railroads in the United States were the 2-8-8-2 Y6b class of the Norfolk and Western Railway. After their final modifications in the 1950s, they were said to be capable of 170,000 lbs tractive effort in simple-expansion mode, although some have questioned this claim (the original design tractive effort was 152,206 lbs SIMPLE and 126,838 lbs COMPOUND). The last were retired in May 1960. 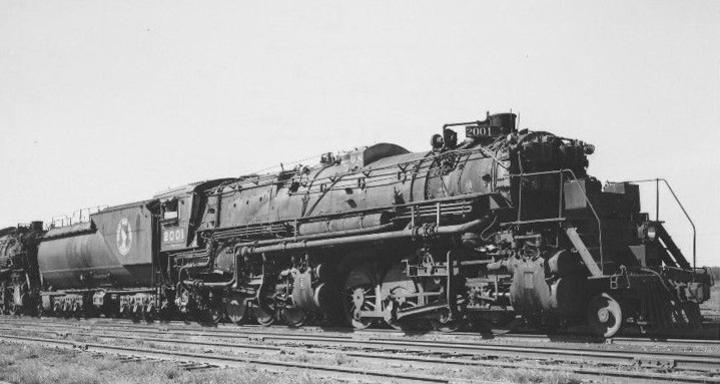