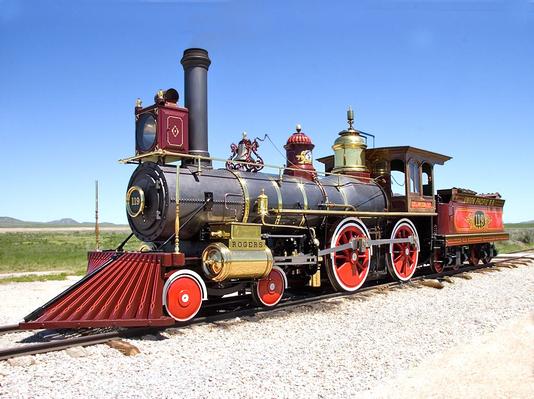 The meticulously recreated UP 4-4-0 American steam locomotive No. 119 at the Golden Spike Historic Site in Utah.

By The original uploader was Mr Snrub at English Wikipedia - Transferred from en.wikipedia to Commons., CC BY-SA 3.0, https://commons.wikimedia.org/w/index.php?curid=3488333

4-4-0 "American" Steam Locomotive
Under the Whyte notation for the classification of steam locomotives by wheel arrangement, 4-4-0 represents the arrangement of four leading wheels on two axles, usually in a leading truck, four powered and coupled driving wheels on two axles, and no trailing wheels. Almost every major railroad that operated in North America in the first half of the 19th century owned and operated locomotives of this type. Due to the large number of the type that were produced and used in the United States, the 4-4-0 is most commonly known as the American type, but the type subsequently also became popular in the United Kingdom, where large numbers were produced.

Several 4-4-0 tank locomotives were built, but the vast majority of locomotives of this wheel arrangement were tender engines.

American development
Five years after new locomotive construction had begun at the West Point Foundry in the United States with the 0-4-0 Best Friend of Charleston in 1831, the first 4-4-0 locomotive was designed by Henry R. Campbell, at the time the chief engineer for the Philadelphia, Germantown and Norristown Railway. Campbell received a patent for the design in February 1836 and soon set to work building the first 4-4-0.

At the time, Campbell's 4-4-0 was a giant among locomotives. Its cylinders had a 14 inches (356 millimeters) bore with a 16 inches (406 millimeters) piston stroke, it boasted 54 inches (1,372 millimeters) diameter driving wheels, could maintain 90 pounds per square inch (620 kilopascals) of steam pressure and weighed 12 short tons (11 tonnes). Campbell's locomotive was estimated to be able to pull a train of 450 short tons (410 tonnes) at 15 miles per hour (24 kilometers per hour) on level track, outperforming the strongest of Baldwin's 4-2-0s in tractive effort by about 63%. However, the frame and driving gear of his locomotive proved to be too rigid for the railroads of the time, which caused Campbell's prototype to be derailment-prone. The most obvious cause was the lack of a weight equalizing system for the drivers.

At about the same time as Campbell was building his 4-4-0, the company of Eastwick and Harrison was building its own version of the 4-4-0. This locomotive, named Hercules, was completed in 1837 for the Beaver Meadow Railroad. It was built with a leading bogie that was separate from the locomotive frame, making it much more suitable for the tight curves and quick grade changes of early railroads. The Hercules initially suffered from poor tracking, which was corrected by giving it an effective springing system when returned to its builder for remodeling.

Even though the Hercules and its successors from Eastwick and Harrison proved the viability of the new wheel arrangement, the company remained the sole builders of this type of locomotive for another two years. Norris Locomotive Works built that company's first 4-4-0 in 1839, followed by Rogers Locomotive and Machine Works, the Locks and Canals Machine Shop and the Newcastle Manufacturing Company in 1840. After Henry Campbell sued other manufacturers and railroads for infringing on his patent, Baldwin settled with him in 1845 by purchasing a license to build 4-4-0s.

As the 1840s progressed, the design of the 4-4-0 changed little, but the dimensions of a typical example of this type increased. The boiler was lengthened, drivers grew in diameter and the firegrate was increased in area. Early 4-4-0s were short enough that it was most practical to connect the pistons to the rear drivers, but as the boiler was lengthened, the connecting rods were more frequently connected to the front drivers.

In the 1850s, locomotive manufacturers began extending the wheelbase of the leading bogie and the drivers as well as the tender bogies. By placing the axles farther apart, manufacturers were able to mount a wider boiler completely above the wheels that extended beyond the sides of the wheels. This gave newer locomotives increased heating and steaming capacity, which translated to higher tractive effort. It was in this decade that 4-4-0 locomotives had assumed the appearance for which they would be most recognized by railways and people around the world.

The design and subsequent improvements of the 4-4-0 configuration proved so successful that, by 1872, 60% of Baldwin's locomotive construction was of this type and it is estimated that 85% of all locomotives in operation in the United States were 4-4-0s. However, the 4-4-0 was soon supplanted by bigger designs, like the 2-6-0 and 2-8-0, even though the 4-4-0 wheel arrangement was still favored for express services. The widespread adoption of the 4-6-0 and larger locomotives eventually helped seal its fate as a product of the past.

The 4-4-0 played a major role in the development of rail transport in the United States. Some of the notable 4-4-0 locomotives that saw service on United States railroads are:

The General, built in 1855 by Rogers, Ketchum & Grosvenor in Paterson, New Jersey, was the fleeing locomotive during the Great Locomotive Chase of the American Civil War.

Walt Disney World Railroad No. 4 Roy O. Disney was built in February 1916 by the Baldwin Locomotive Works, originally as No. 251 for the Ferrocarriles Unidos de Yucatán in Mexico. It now operates on the railroad circling the Magic Kingdom in Orlando, Florida.

The Texas, built in 1856 by Danforth, Cooke and Company in Paterson, New Jersey, was the pursuing locomotive during the Great Locomotive Chase.

The Jupiter, Central Pacific Railroad’s no. 60, built by Schenectady Locomotive Works of New York in September 1868, was one of the two locomotives to meet at Promontory Summit during the Golden Spike ceremony upon the completion of the First American Transcontinental Railroad on May 10, 1869.

Union Pacific no. 119, built by Rogers Locomotive and Machine Works of Paterson, New Jersey in 1868, was the other locomotive at Promontory Summit on May 10, 1869.

The Virginia and Truckee Railroad’s Dayton, built in 1873 by the Central Pacific Railroad, had the honor of opening the branch line between Carson City and Minden in Nevada in 1906.

The New York Central and Hudson River Railroad no. 999, built in 1893 to haul the railroad's Empire State Express, is believed to have been the first in the United States to travel at a speed of more than 100 miles per hour (160 kmph).

By 1900, the 4-4-0 was considered obsolete in United States locomotive manufacture, although they continued to serve on branch lines and in private industry into the mid-20th century. The last 4-4-0 to be built was a diminutive Baldwin product for the United Railways of Yucatan in 1945. Fewer than forty 4-4-0s survive in preservation in the United States, reproductions excluded.

Between 1959 and 1989, the Crown Metal Products Company of Wyano, Pennsylvania built live steam reproductions of classic 4-4-0 designs for use by amusement parks. The largest of these, of which 18 were produced, ran on 3 ft (914 mm) narrow gauge track. Most are patterned after 19th-century American designs, but those produced for Busch Gardens have European styling. Many of these saw daily operation at parks such as Kings Island, Michael Jackson's Neverland Ranch (out of service by 2013), and the Omaha Zoo Railroad at Omaha's Henry Doorly Zoo and Aquarium.

Operational historic locomotives
There are a handful of full-size 4-4-0 steam locomotives built prior to 1945 that are still operating in the United States. Following is a list of locations with working examples and tracks on which to run it.

Note: Significantly altered from its original appearance to resemble steam locomotives from the mid-19th century