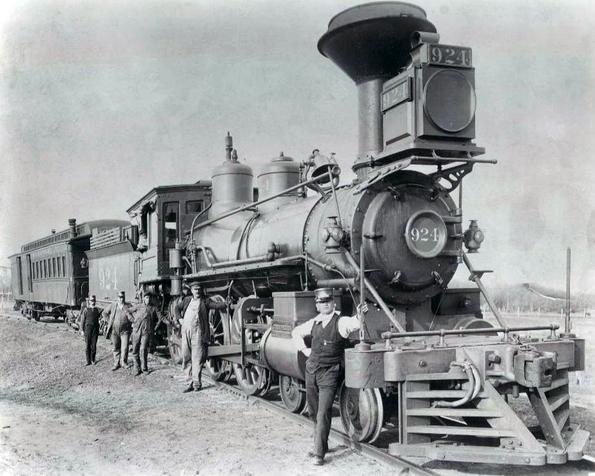 Diagram of two small leading wheels, and three large driving wheels joined together with a coupling rod, front of locomotive at left.

4-6-0 "Ten Wheeler" Steam Locomotive
Under the Whyte notation for the classification of steam locomotives by wheel arrangement, 4-6-0 represents the configuration of four leading wheels on two axles in a leading bogie, six powered and coupled driving wheels on three axles and no trailing wheels. In the mid 19th century, this wheel arrangement became the second most popular configuration for new steam locomotives in the United States of America, where this type is commonly referred to as a Ten-wheeler.

Tender locomotives
During the second half of the nineteenth and first half of the twentieth centuries, the 4-6-0 was constructed in large numbers for passenger and mixed traffic service. A natural extension of the 4-4-0 American wheel arrangement, the four-wheel leading bogie gave good stability at speed and allowed a longer boiler to be supported, while the lack of trailing wheels gave a high adhesive weight.

The primary limitation of the type was the small size of the firebox, which limited power output. In passenger service, it was eventually superseded by the 4-6-2 Pacific type whose trailing truck allowed it to carry a greatly enlarged firebox. For freight service, the addition of a fourth driving axle created the 4-8-0 Mastodon type, which was rare in North America, but became very popular on Cape gauge in Southern Africa.

The 4-6-0T locomotive version was a far less common type. It was used for passenger duties during the first decade of the twentieth century, but was soon superseded by the 4-6-2T Pacific, 4-6-4T Baltic and 2-6-4T Adriatic types, on which larger fire grates were possible. During the First World War, the type was also used on narrow gauge military railways.

United States
The first 4-6-0 locomotive built in the United States of America was the Chesapeake, built by Norris Locomotive Works for the Philadelphia and Reading railroad in March 1847. There are still conflicting opinions as to who the original designer of this type was. Many authorities attribute the design to Septimus Norris of Norris Locomotive Works, but in an 1885 paper, George E. Sellers attributes the design to John Brandt who worked for the Erie Railroad between 1842 and 1851.

According to Sellers, the Erie's own management didn't feel it in their best interests to pursue construction, so Brandt approached Baldwin Locomotive Works and Norris with the design. Baldwin was similarly uninterested, but Norris liked the idea. James Millholland of the Reading also saw the 4-6-0 design and ordered one from Norris for the Reading. However, Sellers may have misinterpreted some of the information since Millholland did not work for the Reading until 1848, a year after the locomotive was built. Furthermore, Sellers refers to the first 4-6-0 to be constructed as the Susquehanna, which was the Erie railroad's first 4-6-0, not the Reading’s.

The attribution to Septimus Norris stems from a patent, allegedly filed in 1846, that many sources cite for this locomotive type. However, such a patent has not yet been found in searches at the United States Patent and Trademark Office (USPTO). Septimus Norris did file a patent in 1854 for running gears, and the patent application showed a 4-6-0 wheel arrangement in the drawing. Norris' wording in the 1854 patent was vague with regard to the 4-6-0 wheel arrangement and the filing did not specifically claim invention of the 4-6-0 configuration.

Through the 1860s and into the 1870s, demand for locomotives of the 4-6-0 wheel arrangement grew as more railroad executives switched from purchasing a single, general-purpose type of locomotive such as the 4-4-0 American at that time, to purchasing locomotives designed for a specific purpose. Both the Pennsylvania Railroad (PRR) and the Baltimore and Ohio Railroad (B&O) were early adopters of the 4-6-0, using them for fast freight as well as heavy passenger trains

There were also two 3 ft narrow gauge 4-6-0 steam locomotives, numbers 274 and 275, built by the Baldwin Locomotive Works in May 1925 for the United Railways of Yucatán in Mexico, where they were withdrawn in 1969. They were rescued and purchased by Disney imagineers Roger E. Broggie and Earl Vilmer for $8,000 each to operate the Walt Disney World Railroad circling around the Magic Kingdom at Walt Disney World in Bay Lake, Florida. No. 274 became no. 1 Walter E. Disney and no. 275 became no. 3 Roger E. Broggie.

Probably the most famous American ten-wheeler is the Illinois Central Railroad’s no. 382, the locomotive driven by Casey Jones in the wreck that was immortalized in Wallace Saunders’ song.

The only surviving locomotive of the 3 ft (914 mm) narrow gauge East Tennessee and Western North Carolina Railroad (ET&WNC) is no. 12, a coal-fired 4-6-0 built in 1917 by the Baldwin Locomotive Works. It was originally used to haul passengers and freight over the ET&WNC's 66-mile (106-kilometre) line running from Johnson City over the Appalachian Mountains to Boone, North Carolina. Since 1957, it has been in operation at the Tweetsie Railroad theme park in Blowing Rock, North Carolina.