4-8-0 "Mastodon" or "Twelve Wheeler"
Under the Whyte notation for the classification of steam locomotives, 4-8-0 represents the wheel arrangement of four leading wheels on two axles, usually in a leading truck or bogie, eight powered and coupled driving wheels on four axles and no trailing wheels. In North America and in some other countries the type was usually known as the Mastodon and sometimes as the Twelve-wheeler.

The very first 4-8-0 locomotive is believed to have been the Centipede, a tender locomotive built by Ross Winans in 1855 for the Baltimore and Ohio Railroad in the United States of America, where it remained in service for nearly twenty years. It appears to have been delivered in a cab-forward type of configuration that was modified to a Camel configuration in 1864.[1] On a Camel locomotive the cab was mounted atop the boiler, unlike the later Camelback locomotive whose cab straddled the boiler and that first appeared around 1877.

The name Mastodon for the 4-8-0 wheel arrangement was derived from the unofficial name of the first 4-8-0 locomotive of the Central Pacific Railroad in the United States, the wood-fired CPR no. 229, which was designed and built in 1882 by the railroad's master mechanic, Andrew Jackson (A.J.) Stevens, at the railroad’s Sacramento works in California.

In the United States, the 4-8-0 was essentially a freight locomotive that was a development of the 2-8-0 Consolidation. Most American 4-8-0 locomotives were built in the late 19th or early 20th century. The type never achieved great popularity, although there were five occasions when a 4-8-0 locomotive was considered as the heaviest and/or most powerful in the world upon its introduction. Those locomotives were the no. 20 Champion of the Lehigh Valley Railroad in 1880, the no. 229 Mastodon of the Central Pacific Railroad in 1882, the G5 class of the Great Northern Railway in 1897 and the no. 640 of the Illinois Central Railroad in 1899. It is noteworthy that the Great Northern G5 had 16-inch-diameter (410 mm) piston valves, as large as the pistons of many locomotives then in service.

Finally, the Duluth and Iron Range Railway ordered a number of trim-lined Mastodons, beginning in 1893, which were reportedly the heaviest freight engines constructed at the time. They had long, between-the-drivers fireboxes and a relatively short stroke for freight engines of the era. They were numbered from 60 to 89 and became the railroad's class J. After 1900, they were gradually phased out in favor of the more conventional Consolidation type. All were scrapped by 1933.

Even though, at the time, the wide-firebox 2-8-2 Mikado had much more potential as far as speed is concerned, the Norfolk and Western Railway opted for the class M4-8-0 for its shorter wheelbase that enabled it to have over 90 percent of the locomotive's weight on the driving wheels, and the four-wheel leading truck for greater stability. The N&W operated 4-8-0s from the early 1900s to the late 1950s. Built by Baldwin Locomotive Works from 1906 and nicknamed Mollies, the class M, class M1 and class M2 became the most numerous American class of 4-8-0.

Norfolk & Western class M2
The class M2 locomotives are often mistakenly believed to be the largest conventional 4-8-0s built, but the Mexican PR-8 was over four tons heavier. Many of them lasted into the 1950s, but were inefficient  steamers since the boiler's heating surface had been significantly increased compared to the classes M and M1, but with no corresponding improvement of firebox volume and grate area.

A single 4-8-0 continues to operate in the United States in Strasburg, Pennsylvania. The locomotive is the Norfolk and Western 4-8-0 no. 475, operating on the Strasburg Rail Road. 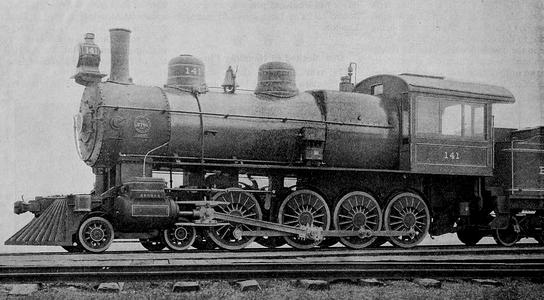 The Centipede as built (bottom) and as modified by the B&O Railroad (top). 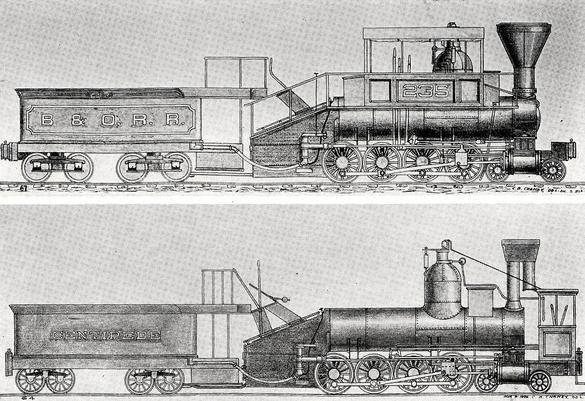