4-8-2 Mountain Steam Locomotive
Under the Whyte notation for the classification of steam locomotives, 4-8-2 represents the wheel arrangement of four leading wheels, eight powered and coupled driving wheels and two trailing wheels. This type of steam locomotive is commonly known as the Mountain type.

United States
The 4-8-2 was most popular on the North American continent. When the 4-6-2 Pacific fleets were becoming over-burdened as passenger trains grew in length and weight, the first North American 4-8-2 locomotives were built by the American Locomotive Company (ALCO) for the Chesapeake and Ohio Railway (C&O) in 1911. It is possible that the "Mountain" name was originated by C&O, after the Allegheny Mountains where their first 4-8-2 locomotives were built to work. ALCO combined the traction of the eight-coupled 2-8-2 Mikado with the excellent tracking qualities of the Pacific's four-wheel leading truck. Although C&O intended their new Mountains for passenger service, the type also proved ideal for the new, faster freight services that railroads in the United States were introducing. Many 4-8-2 locomotives were therefore built for dual service.

A total of about 2,200 Mountain type locomotives were built for 41 American railroads. With 435 4-8-2 locomotives, the largest user in the United States was the New York Central Railroad (NYC), who named theirs the Mohawk type.

Other large users in the United States were the Pennsylvania Railroad with 224 Class M1, Class M1a and Class M1b locomotives that were used mostly for fast freight service, the Florida East Coast with ninety passenger locomotives, the New York, New Haven and Hartford Railroad with seventy, and the Southern Railway with fifty-eight. The heaviest 4-8-2s in the United States were the twenty Illinois Central 2600 class locomotives, built by the railroad in 1945 and 1946.

The Southern Pacific ordered a total of 75 4-8-2s for both freight and passenger service.

Canada
The Angus Shops of the Canadian Pacific Railway (CPR) built a pair of 4-8-2 locomotives in 1914. While they were not replicated, the CPR kept them in service for thirty years. The CPR reverted to 4-6-2 Pacific locomotives before moving on to the 4-6-4 Hudson.

The Canadian National Railway operated eighty U-1 class 4-8-2 locomotives in passenger service, built by Montreal Locomotive Works in 1944. The last twenty, designated the U-1-f class, were delivered with semi-streamlined conical smokebox covers that earned them the nickname of Bullet Nose Bettys. 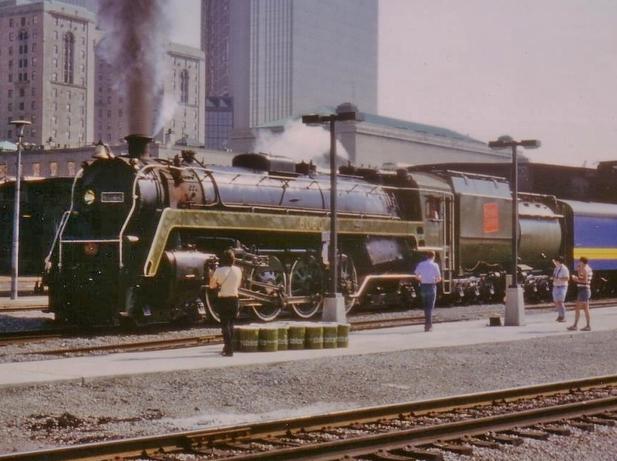 Canadian National No 6060 leaving Union Station on the last steam train to leave that station. Canadian National Railways U-1-f class locomotives, were a class of twenty 4-8-2 or Mountain type locomotives built by Montreal Locomotive Works in 1944. They were numbered 6060–6079 by CN and nicknamed “Bullet Nose Bettys” due to their distinctive cone-shape smokebox door cover. June 30, 1980.   By Peter Broster (CN Class U-1-f No 6060  Uploaded by Skeezix1000) [CC BY 2.0 (http://creativecommons.org/licenses/by/2.0)], via Wikimedia Commons