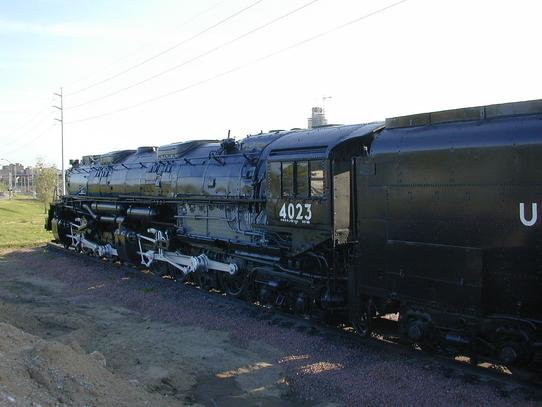 Diagram of the 4-8-8-4 Wheel Arrangement: four leading wheels to guide the locomotive through curves, two sets of eight coupled driving wheels, and four trailing wheels to support the large firebox.

4-8-8-4 "Big Boy" Steam Locomotive
In the Whyte notation for the classification of steam locomotives by wheel arrangement, a 4-8-8-4 is a locomotive with a four-wheel leading truck, two sets of eight driving wheels, and a four-wheel trailing truck. 4-8-8-4s are commonly known as "Big Boys".

Big Boy is the popular name of the American Locomotive Company 4000-class 4-8-8-4 articulated, coal-fired, steam locomotives manufactured between 1941 and 1944 and operated by the Union Pacific Railroad until 1959.

4-8-8-4 Big Boys were only produced for the Union Pacific Railroad. Twenty-five such engines were built between 1941 and 1944, numbered 4000 to 4024. Eight of these locomotives survive, all on static public display at various sites in the United States. Union Pacific has announced plans to restore No. 4014 to operation for use in mainline excursion service. No. 4014 is expected to be operational by 2019.

The UP Big Boys were an expansion of the 4-6-6-4 "Challenger" type articulated locomotive. Although their wheels were an inch (25 mm) smaller than those of the Challengers, they were still able to sustain high speeds. Adding four driving wheels increased the pulling power of the locomotive and reduced the need for helper locomotives over steep grades.

Other American railroads considered buying 4-8-8-4s, including the Western Pacific Railroad, which already rostered large 2-8-8-2s and 4-6-6-4s, but diesel locomotives were gaining popularity and soon were able to displace these monster locomotives.

The Big Boy fleet of twenty five locomotives were used primarily in the Wyoming Division to haul freight over the Wasatch mountains between Green River, Wyoming and Ogden, Utah. They were the only locomotives to use a 4-8-8-4 wheel arrangement consisting of a four-wheel leading truck for stability entering curves, two sets of eight driving wheels and a four-wheel trailing truck to support the large firebox.

According to a Union Pacific executive, the 4-8-8-4 series originally was to have been called "Wasatch". One day while one of the engines was being built an unknown worker scrawled "Big Boy" in chalk on its front. With that, the legendary name was born and has stuck ever since.

Design
Union Pacific introduced the Challenger-type (4-6-6-4) locomotives in 1936 on its main line over the Wasatch Range between Green River, Wyoming and Ogden, Utah. For most of the route, the maximum grade is 0.82% in either direction, but the climb eastward from Ogden, Utah into the Wasatch Range reached 1.14%. Hauling a 3,600-ton freight train demanded double heading and helper operations, and adding and removing helper engines slowed operations.

To eliminate the need for double heading and helper operations, Union Pacific decided to design a new locomotive. For such a locomotive to be worthwhile, it would have to be faster and more powerful than slower locomotives like earlier compound 2-8-8-0s that UP tried after World War I. To avoid locomotive changes, the new class would need to pull long trains at a sustained speed of 60 miles per hour (100 km/h) once past mountain grades. In fact, it was designed so that it could travel smoothly and safely at 80 miles per hour (130 km/h) — even though it was not intended to be used that fast.

Led by mechanic Otto Jabelmann, the Union Pacific Railroad's design team worked with the American Locomotive Company to re-examine their Challenger locomotives. The team found that Union Pacific's goals could be achieved by enlarging its firebox to approximately 235 by 96 inches (5.97 m × 2.44 m) (about 155 sq ft or 14.4 m2), lengthening the boiler, adding four driving wheels and reducing the size of the driving wheels from 69 to 68 in (1,753 to 1,727 mm) on a new engine.

The Big Boys are articulated, like the Mallet locomotive design. They were built with a wide margin of reliability and safety, and normally operated well below 60 miles per hour (100 km/h) in freight service. Peak horsepower was reached at about 35 mph (56 km/h); optimal tractive effort, at about 10 mph (16 km/h). Without the tender, the Big Boy has the longest engine body of any reciprocating steam locomotive.

Manufacturing
The American Locomotive Company manufactured 25 Big Boy locomotives for Union Pacific; two groups of ten in 1941 and one group of five in 1944.

Operation
The Big Boy locomotives had large grates to burn the low-quality bituminous coal from Union Pacific-owned mines in Texas. As an experiment, Locomotive 4005 was converted to burn oil; unlike a similar effort with the Challengers, it failed due to uneven heating in the Big Boy's large, single-burner firebox.

Postwar increases in the price of both coal and labor and the efficiency of diesel-electric motive power foretold a limited life for the Big Boys, but they were among the last steam locomotives taken out of service. Towards the end of their career, the Big Boys could still pull more than their rated tonnage of 6,573 tons. The Big Boys' ratings were increased several times until they regularly pulled 8,727 tons over the Wasatch range.

The last revenue train hauled by a Big Boy ended its run early in the morning on July 21, 1959. Most were stored operational until 1961 and four remained in operational condition at Green River, Wyoming until 1962. Their duties were assumed by diesel locomotives and gas turbine-electric locomotives.

Accident
On April 27, 1953, Locomotive 4005 was pulling a freight train through southern Wyoming and jumped the switch track at 50 miles per hour (MPH), throwing the engine onto its left side and derailing its tender and the first 18 freight cars of the 62-car train. Sadly, the engineer and fireman were killed instantly on impact and the brakeman died in a hospital a few days later from his severe burns. The cab of the locomotive was destroyed by the tender, and the loads from the 18 derailed cars were scattered near the site of the accident. After this incident, 4005 was repaired by Union Pacific at its Cheyenne facility.

Preservation
Of the 25 Big Boy locomotives manufactured, eight remain. Seven of the eight surviving Big Boys are on static display. One, number 4014, is undergoing a restoration to operating condition for excursion service which includes conversion to No. 5 oil firing. Five are displayed outdoors without protection from the elements; 4005 and 4017 are displayed indoors. The remaining Big Boy locomotives are located throughout the United States:

4004: Holliday Park, Cheyenne, Wyoming
4005: Forney Transportation Museum, Denver, Colorado – The Forney Transportation Museum in Denver moved 4005 to a renovated building in January 2001.
4006: Museum of Transportation, St. Louis, Missouri
4012: Steamtown National Historic Site, Scranton, Pennsylvania – Built in November 1941, Union Pacific retired 4012 in 1962. 4012 was on display at Steamtown, USA in Bellows Falls, Vermont until 1984 when it was moved to Scranton, Pennsylvania. 4012 is displayed outdoors since the Steamtown turntable and roundhouse are inadequate for 4012's size. The Steamtown SHS recommended that due to its good condition, No. 4012 could be feasibly restored to working order but only after determining if surrounding "track, switches, culverts, trestles, bridges, wyes, turntables and other facilities could bear her great weight".
4014: Union Pacific Railroad, Cheyenne, Wyoming – Reacquired by Union Pacific in 2013 and moved from its static display in Fairplex Rail Giants Museum in Pomona California to be restored to full steam operation and operated in excursion service.
4017: National Railroad Museum, Green Bay, Wisconsin – No. 4017 now resides in a climate-controlled shed.
4018: Museum of the American Railroad, Frisco, Texas – No. 4018 was part of the museum's collection at its former location in Dallas, Texas, and was relocated by rail to the museum's new location north of Dallas in Frisco, Texas on August 25, 2013.
4023: Kenefick Park, Omaha, Nebraska – Number 4023 is the only known Big Boy to move by highway since preservation, to Kenefick Park in Omaha.