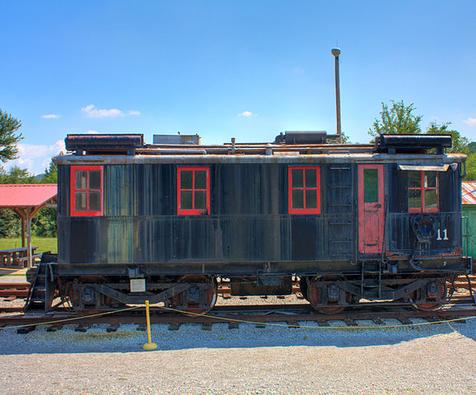 ALCO AGEIR Boxcab Diesel-Electric Locomotive
The ALCO boxcabs were diesel-electric switcher locomotives, otherwise known as AGEIR boxcabs as a contraction of the names of the builders. Produced by a partnership of three companies, ALCO (American Locomotive Company) built the chassis and running gear, General Electric the generator, motors and controls, and Ingersoll Rand the diesel engine. The principle of operation was the same as modern locomotives, the diesel engine driving a main generator of 600 volts DC with four traction motors, one per axle.

Two models were the 60-Ton with a six-cylinder four-stroke in-line engine of 300 hp (220 kW) and the 100-Ton with two of the same engines. Thirty-three units were produced between 1925 and 1928. These were the first commercially successful production diesel-electric locomotives.

The earliest boxcabs were often termed "oil-electrics" to avoid the use of the German name "Diesel", unpopular after World War I.

In Thomas & Friends, the character Philip is based on an example of the ALCO boxcab, he is in-fact modified to work on the NWR.

By William Hunter [CC BY 2.0 (http://creativecommons.org/licenses/by/2.0)], via Wikimedia Commons