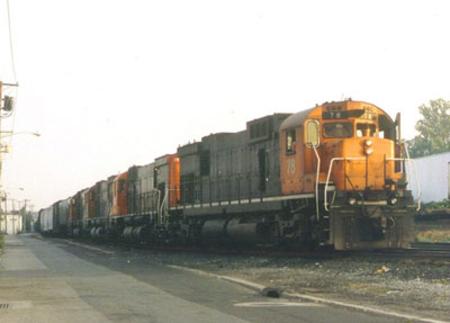 By The original uploader was Nysw252 at English Wikipedia - Transferred from en.wikipedia to Commons by Sreejithk2000 using CommonsHelper., Copyrighted free use, https://commons.wikimedia.org/w/index.php?curid=16280355

ALCO Century 636 Diesel-Electric Locomotive
The ALCO Century 636 was the most powerful single-engine diesel-electric locomotive constructed by American Locomotive Company (ALCO). It used the ALCO 251 prime mover. The locomotive had a C-C wheel arrangement and 3,600 horsepower (2,700 kW). The locomotive rested on a pair of trucks of all-new design, known as the Hi-Ad, standing for 'high adhesion'. Visually, it is similar to the Century 630, but can be distinguished by the intercooler box. The C630 has two grilles here, one above the other. The C636 only has the upper grille.

Production
The production of only 34 Alco C636s, built in 1967 and 1968, reflected Alco's dwindling locomotive market share. Despite many new and innovative features, the C636 could not hold its own. Three demonstrators were built costing Alco about $5.5 million. 636-2, the only former demonstrator operating, was a factor in dissuading potential customers from purchasing these locomotives. During an evaluation on the Santa Fe Railway, the same traction motor blower on 636-2 failed (which causes engine shutdown) and was replaced on three of four runs, and had other unsatisfactory results while being tested on the Southern Pacific Railroad.

AE Goodwin in Australia built 29 C636s between May 1968 and October 1970 for the Pilbara Iron Ore railroads. Hamersley Iron purchased 12 units in 5 separate orders. Bechtel purchased 5 C636s for use in the construction of the Mount Newman Mining facilities. The latter company ordered 12 C636s a year later and bought Bechtel's locomotives. Hamersley Iron had their fleet rebuilt in the 1980s by Comeng, Bassendean with General Electric engines.

As of March 2015, the Delaware Lackawanna is the last operator of the C-636. The two former Cartier, ex-Alco demonstrator units stored on the Bath and Hammondsport Railroad for many years have been scrapped by a local contractor. The NYSW is currently an all-EMD powered railroad. The WNYP still operates M-630 and M-636 MLW locomotives.