Union Pacific Railroad 60B, the only Century 855B built. 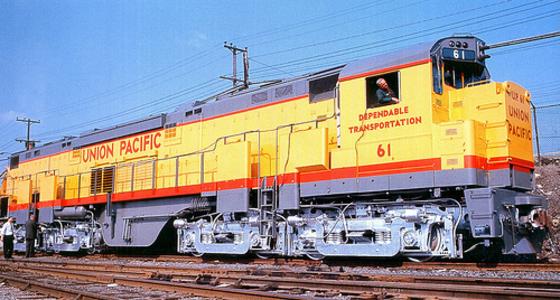 Powered by a pair of 16 cylinder ALCO 251C diesel engines, and rated at 5,500 hp (4,101 kW), it was ALCO's answer to the EMD DD35 and the GE U50. The C855 rode on four two-axle trucks, grouped in pairs linked by span bolsters, giving a wheel arrangement of B+B-B+B. The trucks and bolsters were similar to those under UP's earlier turbine locomotives. Only two A units and one B unit were built, all for Union Pacific Railroad, which had also requested double-engined locomotives from EMD and GE in order to replace the turbines, which had become uneconomical to operate.

Union Pacific also wished to reduce the number of locomotives needed on a consist, to keep in line with their allowable gross weight limit. By consolidating several locomotives into one or two, this allowed them to lower the axle load on the rails, but to stay within the limits placed by the company. They spent their lives in the general freight pool at North Platte; however, poor performance led to their early retirement and eventual scrapping by February 1972.

Road number B unit: 60B
Locale: North America
Delivered: July, 1964
Disposition: All scrapped
Stats above apply to cab units only.