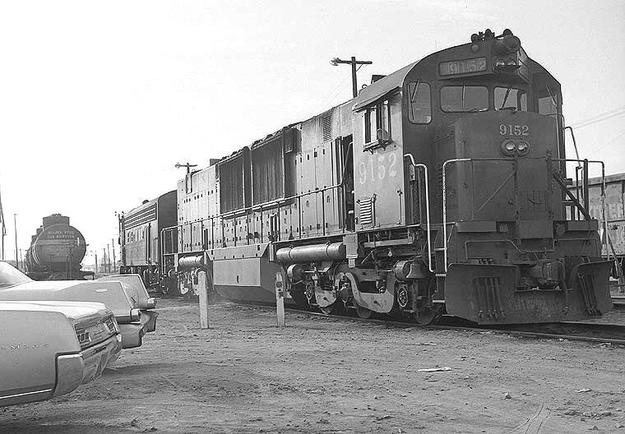 ALCO Century C-643DH Diesel Hydraulic Locomotive
The ALCO C-643DH, also known as the Century 643DH, was a twin-engine diesel-hydraulic locomotive, the first diesel-hydraulic road unit built in the United States. It had a C-C wheel arrangement and generated 4,300 horsepower (3,200 kW). Only three were built, all for Southern Pacific Railroad in 1964 (No. 9018 – No. 9020). The Alco C-643DHs joined 21 Krauss-Maffei ML-4000 diesel-hydraulics already on the Southern Pacific's roster. These hydraulic-drive diesels spent most of their service lives in the flat San Joaquin Valley in California.

Dissatisfaction over the poor performance of diesel-hydraulic locomotives, as well as their use of foreign-made components (the hydraulic transmission was of German Voith design), eventually led Southern Pacific to scrap the C-643DHs in 1973.

Southern Pacific No. 9152, formerly SP No. 9020.
By The original uploader was Can't Undo at English Wikipedia - Transferred from en.wikipedia to Commons., CC BY-SA 3.0, https://commons.wikimedia.org/w/index.php?curid=2648679