Alco PA Diesel-Electric Locomotive
ALCO PA refers to a family of A1A-A1A diesel-electric locomotives built to haul passenger trains that were built in Schenectady, New York in the United States by a partnership of the American Locomotive Company (ALCO) and General Electric (GE) between June, 1946 and December, 1953. They were of a cab unit design, and both cab-equipped lead A unit PA and cabless booster B unit PB models were built.

Background and development
The PAs, as well as their cousins, the ALCO FAs, were born as a result of Alco's development of a new diesel engine design, the Model 244. In early 1944, development started on the new design, and by November 1945, the first engines were beginning to undergo tests. This unusually short testing sequence was brought about by the decision of Alco's senior management that the engine and an associated line of road locomotives had to be introduced no later than the end of 1946. In preparation for this deadline, by January 1946, the first 16 cylinder 244 engines were being tested, and while a strike delayed work on the locomotives, the first two PA units were released for road tests in June 1946, for testing for one month on the Lehigh Valley Railroad. After these first tests were completed, the locomotives returned to the factory for refurbishment and engine replacement. In September 1946, the first production units, an A-B-A set of PA1s in Santa Fe colors were released from the factory, and sent to New York's Waldorf-Astoria Hotel, which had a private railroad siding, for exhibition before being launched into road service. 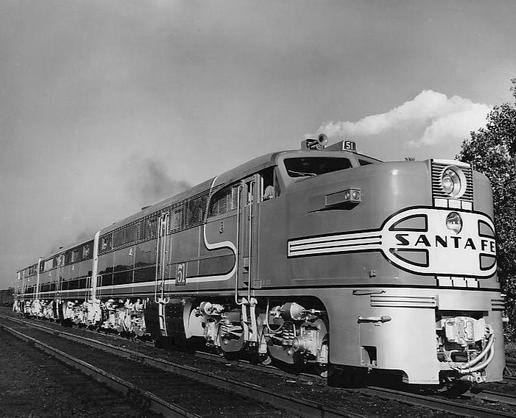 Models popularly termed the PA-3/PB-3 were in fact only an upgrade of the PA-2/PB-2. The true PA-3/PB-3 model would have boasted 2,400 horsepower, though none were ever built. Aside from the small power increase between the PA-1 and the PA-2, differences were minor. Externally PA-2s could be distinguished by the absence of the "eyebrow" trim piece on the grille behind the cab and the porthole window behind the radiator shutters. Internally, later PA-2 and PB-2 production featured a water-cooled turbocharger and other engine compartment changes, but these were frequently added to older models undergoing major repairs or overhauls. Four PA-1s were upgraded by Morrison-Knudsen in 1974-75 for passenger service on the Delaware & Hudson and became the PA4. These were eventually used by Amtrak for the "Adirondack" train and then by the Mass Bay Transit Authority before being sold to Mexico.

Like its smaller cousin, the ALCO FA, the PA had distinctive styling, with a long, straight flat-tipped nose with a headlight in a square, slotted grille, raked windshields, and trim pieces behind the cab windows that lengthened and streamlined the lines. The overall design owed something to the Fairbanks-Morse Erie-built design, which had been constructed by ALCO's electrical equipment partner General Electric at their Erie, Pennsylvania plant. The majority of PA components were compatible with the FA.

Fans deemed the PA one of the most beautiful diesels and an "Honorary Steam Locomotive", as noted by Professor George W. Hilton in a book review in September, 1968 Trains Magazine. When accelerating, until the turbocharger came up to speed thick clouds of black smoke would pour from the exhaust stacks, due to turbo lag. Photographing a moving PA while smoking became a prime objective of railfans.

The ALCO 244 V16 diesel prime mover proved to be the undoing of the PA: The engine had been rushed into production, and proved to be unreliable. The PA locomotives failed to capture a marketplace dominated by General Motors Electro-Motive Division and their E-units. The original Santa Fe three unit set #51L, 51A and 51B was re-powered in August 1954 with EMD 16-567C engines rated at 1,750 hp. This was economically unfeasible and the remaining Santa Fe PAs retained their 244 engines. The later 251-series engine, a vastly improved prime mover, was not available in time for ALCO to recover the loss of reputation caused by the unreliability of the 244. By the time the ALCO 251 engine was accepted into widespread use, General Electric (which ended the partnership with ALCO in 1953) had fielded their entries into the diesel-electric locomotive market. General Electric eventually supplanted ALCO as a manufacturer of locomotives. ALCO's loss of market share led to its demise in 1969.

Foreign sales
The PA-2 units sold to the 1,600 mm (5 ft 3 in) broad gauge Companhia Paulista de Estradas de Ferro of São Paulo State in Brazil were equipped with a bar pilot and solid horizontal steel pilot beam. One of these locomotives survives.

Surviving examples
Five PA units survive. One surviving unit, No. 600, is from the order of three broad gauge units sold to Companhia Paulista de Estradas de Ferro in Brazil. It exists at the Companhia Paulista Museum at Jundiai, São Paulo as a shell with no prime mover and no side panels. A restoration was begun in 2001 but has not been completed.

Four (No.16-19) are of the ex-Santa Fe group of locomotives purchased by the Delaware & Hudson in 1967. In 1974-1975, these four units were rebuilt for the D&H by Morrison-Knudsen and equipped with ALCO's 251V12 engines. During this rebuilding the units were given the designation PA-4 by MK. These locomotives were later sold to Mexico.

Of the D&H units, two are in the United States, No.16 and No.18. These units returned to the U.S. in 2000 after years of storage at Empalme, Sonora, Mexico. No.16, which was heavily damaged in a derailment while in Mexico, was planned to be cosmetically restored into its original "Warbonnet" colors for the Smithsonian Institution. The unit was acquired by the Museum of the American Railroad and transported to the museum's new site in Frisco, Texas in April 2011. This unit will be restored to full operational status as America's PA for use in special trains across the United States.

No. 18/190 is privately owned by Doyle McCormack and is being restored to operating condition as Nickel Plate Road No.190. The restored locomotive recreates the first locomotive in which McCormack, whose father worked for the Nickel Plate Road, got to ride. It is fitted with a more modern Montreal Locomotive Works 251V12 diesel prime mover removed from a wrecked former BC Rail M420B.

No.19 is kept in operational condition at the National Museum of Mexican Railroad in Puebla, while No. 17 remains on display in the museum. Unit DH-17 (former D&H No. 17) was painted in the classic Southern Pacific Daylight colors, but as of February 2010 had been painted over in primer.