Green Bay and Western Railroad 2407, an ALCO RSD-15, at the Illinois Railway Museum.

ALCO RSD-15 Diesel-Electric Road Switcher Locomotive
The ALCO RSD-15 was a diesel-electric locomotive of the road switcher type built by ALCO (the American Locomotive Company) of Schenectady, New York between August 1956 and June 1960, during which time 75 locomotives were produced. The RSD-15 was powered by an ALCO 251 16-cylinder four-cycle V-type prime mover rated at 2,400 horsepower (1.79 MW); it superseded the almost identical ALCO 244-engined RSD-7, and was catalogued alongside the similar but smaller 1,800 hp (1.34 MW) RSD-12, powered by a 12-cylinder 251-model V-type diesel engine.

The locomotive rode on a pair of three-axle Trimount trucks, in an AAR C-C wheel arrangement, with all axles powered by General Electric model 752 traction motors. These trucks have an asymmetrical axle spacing because of the positioning of the traction motors. The six-motor design allowed higher tractive effort at lower speeds than an otherwise similar four-motor design.

The RSD-15 could be ordered with either a high or low short hood; railfans dubbed the low short hood version "Alligators", on account of their unusually long low noses.

RSD-17
A single example of the very similar model RSD-17 was built by the Montreal Locomotive Works in 1957. After demonstrating on the Canadian Pacific (as No. 7007), the Canadian National (as No. 3899), and the Pacific Great Eastern (as No. 624), the locomotive was purchased by the Canadian Pacific (as No. 8921). Nicknamed "The Empress of Agincourt", by Pete Fairfull, who was its primary operator for many years, (for its common presence around Toronto's Agincourt yard), the locomotive served the railway until 1995, when truck problems forced its retirement.

Surviving examples
Six RSD-15s survive in preservation; all are ex-Santa Fe units. Only two are in operating condition; the Austin and Texas Central No. 442, ex-ATSF 842, painted in a modified Southern Pacific "Black Widow" scheme, and Green Bay and Western Railroad RSD-15 No. 2407 (Ex-ATSF 841) at the Illinois Railway Museum. Others that are preserved are ex-ATSF No. 823, in former owner Utah Railway colors at the Utah Railroad Museum, the California State Railroad Museum in Sacramento has one and the Arkansas Railroad Museum has ex-ATSF No. 843.

Models
The RSD-15 has been produced in N scale by Mehano of Yugoslavia.

The RSD-15 has been produced in HO scale by Broadway Limited Imports.

The RSD-15 has been produced in O scale by Atlas O in their Trainman line.

No RSD-17 has been produced in any scale other than as a handmade brass import. 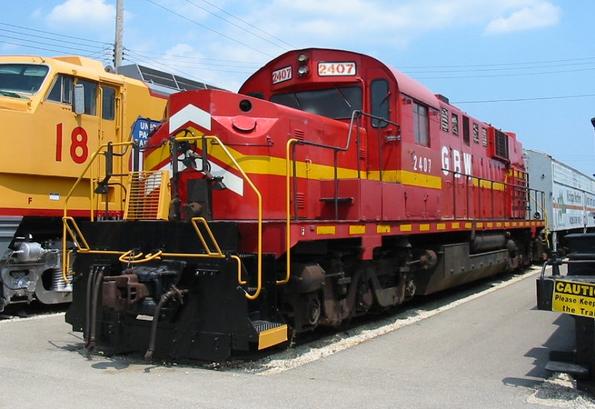