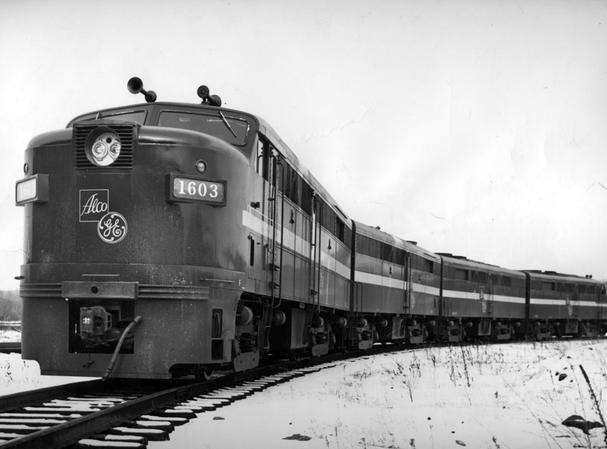 An ALCO FA-2 demonstrator locomotive in December of 1960. This set was eventually sold to the Chicago and North Western railroad.

Foundation and early history
The company was created in 1901 from the merger of seven smaller locomotive manufacturers with Schenectady Locomotive Engine Manufactory of Schenectady, New York.

The newly formed company was headquartered in Schenectady, New York.

Eventually the American Locomotive Company operated manufacturing plants only in Schenectady and Montreal, having closed all the others.

After the American Locomotive Company ceased locomotive manufacturing in the United States in 1969, Montreal Locomotive Works continued to manufacture locomotives based on Alco designs.

Other than the Delaware & Hudson's application of SKF roller bearings to the drivers, main and side rods of their own 4-6-2 locomotives in 1924 (the world's first), Alco built the first production steam locomotive in North America to use roller bearings: Timken 1111, a 4-8-4 commissioned in 1930 by Timken Roller Bearing Company was used for 100,000 miles (160,000 km) on fifteen major United States railroads before it was purchased in 1933 by the Northern Pacific Railway. (The Northern Pacific renumbered the Four Aces to No. 2626 and ran it on the North Coast Limited, as well as its pool trains between Seattle, Washington, and Portland, Oregon, and excursions, through 1957.)

During World War II, Alco produced many 2-10-0 Decapods for the USSR. Many of these were undelivered at the end of the war, and ten of these were sold to Finland in 1947. One, Alco builder's No. 75214, is preserved at the Finnish Railway Museum.

Though the dual-service 4-8-4 steam locomotive had shown great promise, 1948 saw the last steam locomotives erected in Schenectady. These were the seven A-2a class 9400-series Pittsburgh and Lake Erie Railroad 2-8-4 "Berkshires." Their tenders, however had to be subcontracted to Lima Locomotive Works, as Alco's tender shop had been closed, and the building converted to diesel locomotive manufacture.

Joseph Burroughs Ennis (1879–1955) was a senior vice president between 1917 and 1947 and was responsible for the design of many of the locomotives manufactured.

​Alco Automobiles
The company diversified into the automobile business in 1906, producing French Berliet designs under license. Production was located at ALCO's Rhode Island Locomotive Works in Providence, Rhode Island. Two years later, the Berliet license was abandoned, and the company began to produce its own designs instead. An ALCO racing car won the Vanderbilt Cup in both 1909 and 1910 and competed in the first Indianapolis 500 in 1911, driven on all three occasions by Harry Grant. ALCO's automotive venture was unprofitable, and they abandoned automobile manufacture in 1913. The Alco automobile story is chiefly notable for starting the automobile career of Walter P. Chrysler, the plant manager, who left for Buick in 1911 and subsequently founded the Chrysler Corporation in 1925.

Diesel-Electric Locomotives
Although it was strongly committed to the steam locomotive, Alco produced the first commercially successful diesel-electric locomotive in 1924 in a consortium with General Electric (electrical equipment) and Ingersoll-Rand (diesel engine). This locomotive was sold to the Central Railroad of New Jersey, and subsequent locomotives were built for a number of railroads including the Long Island Rail Road and the Chicago and North Western Railway.

The company bought an engine manufacturer, McIntosh & Seymour Diesel Engine Company, in 1929 and henceforth produced its own diesel engines, although electrical equipment was always from GE. The transition from steam to diesel was largely overseen by Perry T. Egbert, vice president in charge of diesel locomotive sales and later president of the company. Alco was, in the 1930s, the pre-eminent diesel locomotive builder in the United States, but the General Motors Electro-Motive Division took over that position with aggressive marketing, a ready supply of development capital from its parent company, and the intervention of the war years. During that troubled time, Alco was allocated the construction of diesel switching locomotives, a handful of ALCO DL-109 dual-service engines and its proven steam designs, whereas EMD was allocated the construction of mainline road freight diesels (the production of straight passenger-service engines was prohibited by the War Production Board). This was because Alco's revolutionary RS-1 roadswitcher was selected by the U.S. Army for a vital task. ALCO ranked 34th among United States corporations in the value of wartime production contracts. The Kriegsmarine's capital ships, led by the Tirpitz, and the Luftwaffe were threatening Allied shipping to the Soviet Union at the port of Murmansk from bases in Norway. This was, at the time, the Soviet lifeline. Thanks to successes in Africa, the U.S. was able to rehabilitate the Trans-Iranian Railway and extend it to the USSR, and the power they chose for it was the RSD-1, a six-axle, six traction motor variant of the light Alco. Not only was the company prevented from selling them to mainline U.S. railroads, the thirteen RS-1s that had already been built were commandeered for Iranian duty and converted to RSD-1. This gave EMD a lead in the market that could not be overcome. Also a factor was that Alco's diesel locomotives were competing with its own steam locomotive products, while EMD had no such overlap. In 1940, Alco and GE entered into a partnership to build diesels under the name Alco-GE, an arrangement that lasted until 1953.

By 1948, Alco possessed 40% of the diesel locomotive market. PA and FA-type road units, as well as the ubiquitous S series (660 and 1,000 horsepower) switchers and RS series (1,000, 1,500, and 1,600 horsepower) road switchers represented Alco well in those years of motive power transition. Much of their success in this period can be tied to their pioneering RS locomotives, representing the first modern road-switcher, a configuration which has long outlasted Alco. General Electric was represented in the electrical gear of every locomotive produced by Alco. The complete conversion to diesels, unfortunately, did not mean that Alco was to maintain this production standing.

Nevertheless, the company held the number two position in the market until General Electric, dissatisfied with the results of its partnership with Alco, entered the domestic road diesel locomotive market itself in 1956. GE quickly took the number two position from Alco, and eventually eclipsed GM-EMD in overall production. Despite continual innovation in its designs (the first AC/DC transmission among others), Alco gradually succumbed to its competition, in which its former ally, General Electric, was becoming an important element. A new line of "Century" locomotives including the C630 (the first AC/DC transmission), the C430 and the C636, the first 3,600 horsepower locomotive, failed to keep the enterprise going. Third place in the market proved to be an impossible position; Alco products had neither the market position or reputation for reliability of GM-EMD's products nor the financing muscle and customer support of GE, and profits were not forthcoming. Alco gradually ceased locomotive production, shipping its last two locomotives, a pair of T-6 switchers to the Newburgh and South Shore Railroad (No. 1016 and No. 1017) in January 1969. Alco closed its Schenectady locomotive plant later that year, and sold its designs to the Montreal Locomotive Works in Canada.

Diversification
Although its fling with automobiles was ultimately unsuccessful, Alco diversified into other areas with greater success. During World War II, Alco built munitions for the war effort, in addition to locomotive production; this continued throughout the Korean War. After the Korean War, Alco entered the oil production equipment and nuclear power plant markets, the latter also starting the company's involvement in the heat exchanger business.

In 1955, the company was renamed Alco Products, Inc. because locomotives were no longer its predominant product.

Purchase and Division
The company was purchased in 1964 by the Worthington Corporation, which merged with the Studebaker corporation in 1967 to form Studebaker-Worthington, Inc. (SWI), Alco remaining a wholly owned subsidiary. Former divisions of Alco became semi-independent subsidiaries in 1968.

After the termination of locomotive production in 1969, the locomotive designs (but not the engine development rights) were transferred to the Montreal Locomotive Works, who continued their manufacture. The diesel engine business was sold to White Motor Corporation in 1970, who formed them into White Industrial Power. In 1977 White Industrial Power was sold to the British The General Electric Company plc (GEC) who renamed the unit Alco Power, Inc. The business was subsequently sold to the Fairbanks-Morse corporation, who continue to manufacture Alco-designed engines in addition to their own design.

Epilogue
After the closure of Alco's Schenectady works, locomotives to Alco designs continued to be manufactured in Canada by Montreal Locomotive Works, and in Australia by A. E. Goodwin. In addition, Alco derived locomotives form the major chunk of diesel power on the Indian Railways. Many thousands of locomotives with Alco lineage are in regular mainline use everywhere in India and around 100 new locos are added every year.

A number of Alco and MLW diesel-electric locomotives (models DL500C, DL532B, DL537, DL543, MX627 and MX636) are in daily use hauling freight trains of the Hellenic Railways Organization (OSE) in Greece. The oldest of them (class A.201, DL532B) were delivered to the former Hellenic State Railways (SEK) in 1962. In addition to a variety of standard gauge locomotives, the fleet includes 11 meter gauge Alco locomotives, mainly used for departmental trains in the Peloponnese network. The MX627 and MX636 locomotives have been extensively rebuilt at Piraeus Central Factory of OSE. The remaining Alco locomotives are also being rebuilt, starting with models DL532B and DL537.

Alco and MLW locomotives still work on many regional and tourist railroads across the United States and Canada, including the Delaware-Lackawanna Railroad in Scranton, Pennsylvania,the Catskill Mountain Railroad in Kingston and Phoenecia New York the Livonia, Avon and Lakeville Railroad family of lines based in Lakeville, New York, and the Middletown and Hummelstown Railroad in Middletown, PA. The M&H owns one of the last true ALCO switchers ever built, No. 1016. The 1016 is a T-6 type switcher engine. This and ALCO sister 151 (ex Western Maryland S-6) still see daily service in Middletown.

ALCO-Cooke 2-8-0 No. 18, built in 1920, survives in passenger service on the Arcade & Attica Railroad in Arcade NY. It returned to service in May 2009 after a six-year overhaul to bring it into compliance with the FRA's new steam locomotive regulations.

Some Alcos survive on Australian networks and in Bangladesh and Pakistan. Another fleet of Alco Bombardier locomotives run in rugged terrain on the Sri Lanka railway network. Argentina also has a healthy fleet of Alcos DL540 running commuter and cargo trains.

The Glenbrook Vintage Railway in the Franklin District, south of Auckland, New Zealand, has a 2-4-4-2 articulated compound mallet, built by ALCO in 1912. Only four mallets with this wheel arrangement were ever built; the other three by Baldwin. This unique loco is currently out of service awaiting overhaul.

Popular culture
ALCO helped launch the career of a noted railroad artist, Howard Fogg. Hired in 1946 as ALCO’s new company artist, Howard began painting their locomotives in the livery of prospective customers, as well as taking photographs of them.

At an ALCO gala at the Waldorf Astoria Hotel, Lucius Beebe, a noted journalist with the New York Herald-Tribune, sought out Howard. Beebe was considering leaving New York to pursue writing and publication of railroad books. A long-term relationship was born, with Beebe buying a number of paintings over the years and commissioning new paintings for use in his books. In 1947, Beebe’s book, Mixed Train Daily, was the first of many to use a Fogg painting on the cover. He was used by many other railroad authors because of his skill at capturing action shots. With commissions from individuals, authors, publishers, railroads, and related industrial firms flourishing, in 1957 Howard ended his formal agreement with ALCO, although he continued to paint periodic commissions for them for a number of years.