Bombardier ALP-46 Electric Locomotive
The ALP-46 is an electric locomotive built in Germany by Bombardier between 2001 and 2002 for use in the United States. It is derived from the German Class 101. New Jersey Transit (NJT) is the only railroad to operate this locomotive model. They can be found all over the electrified NJT system, but are primarily used for service to and from Penn Station in New York City.

They were built by Bombardier (formerly ADtranz) at their Kassel, Germany plant. The first two locomotives were built as preseries locomotives for testing—4600 was tested on the TTCI test plant in Pueblo, Colorado, 4601 was sent to Kearny for testing on the NJT network. All locomotives were transported via road to the port of Bremen and shipped on Roro-ships of Wallenius Wilhelmsen Logistics to Port Elizabeth (NJ).

In February 2008, NJT ordered twenty-seven 125 mph (201 km/h) top speed ALP-46A locomotives from Bombardier, which were to haul Bombardier MultiLevel Coaches. The estimated value of the order was approximately $230 million (€155 million). In June 2009, NJT took up an option for a further nine locomotives, and spare parts, at a cost of $72 million.

On November 12, 2009, Bombardier ceremonially handed over the first two completed ALP-46As to New Jersey Transit over at their Kassel plant in Germany.

They arrived on NJT property on December 13. Locomotive 4629 was shipped by rail to a testing facility in Pueblo, Colorado, while 4630 was placed on the rails at the Meadows Maintenance Complex in Kearny for testing on property and maintenance training.

Future North American Clients
Commuter rail operator GO Transit is considering the use of the ALP-46 for some or all of the operator's current lines. GO Transit has performed a study on electrification of their current diesel operations.

Variants, operations
Both the ALP-46 and ALP-46A are have been used to haul NJ Transit's Comet IIM, IV, V, and Multilevel fleet. The ALP-46 was also used to pull Amfleet consists on Amtrak's Clocker service in its final days of operation.

ALP-46
The ALP-46 locomotives produce 7,100 hp (5,300 kW) and are powered by overhead catenary. They can reach a top speed of 100 mph (161 km/h). The ALP-46 is derived from the DBAG Class 101 locomotive; its top operating speed is 100 mph (161 km/h). The locomotives use Bombardier's MITRAC 3000 electric propulsion system. The system consists of a polyol-ester cooled transformer to reduce the catenary voltage which feeds two polyol-ester cooled GTO based traction converters (Bombardier MITRAC TC 3100 series). Each traction converter feeds the motors (Bombardier MITRAC DR 3000 series) of one truck.

The ALP-46A locomotives use Bombardier's MITRAC 3000 electric propulsion system. The traction converters (Bombardier MITRAC TC 3360 series) are from a newer generation based on IGBT technology. The converters are water cooled and have individual inverters for each traction motor (Bombardier MITRAC DR 3000 series).[citation needed] Power at rail is increased to 7,500 hp (5,600 kW) and top speed is increased to 125 miles per hour (201 km/h), though NJ Transit limits them to 100. The bell used is also changed to Graham White E-Bells. 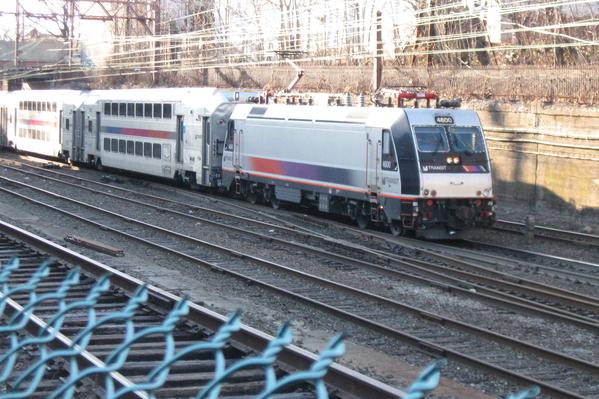