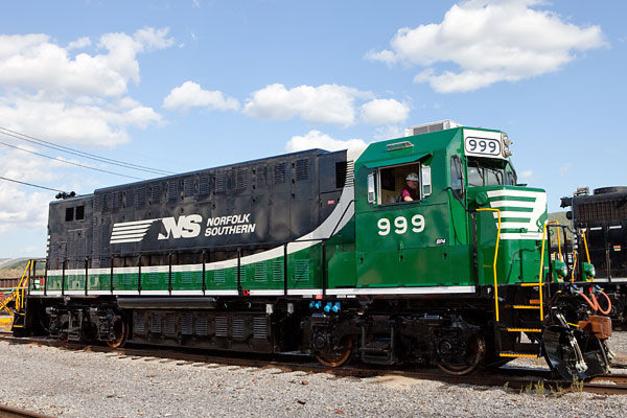 Norfolk Southern GP33ECO
The NS GP33ECO is a 4-axle diesel-electric locomotive built by the Norfolk Southern Railway in its Juniata Locomotive Shop. The locomotive is a rebuild of the EMD GP50 designed to meet Tier 3 emissions standards. Norfolk Southern plans to convert a total of 25 GP50s. The first locomotive was completed in January 2015. The rebuild was funded in part by the federal Congestion Mitigation and Air Quality Improvement Program.

Altoona Works BP4 Zero-Emission Locomotive
The Altoona Works BP4 is a 1,350 hp (1,010 kW) B-B battery-electric locomotive rebuilt by the Altoona Works of the Norfolk Southern Railroad. It is the result of a conversion of an existing EMD GP38-type locomotive. This involves replacing the existing prime mover with a set of 1080 12-volt lead-acid batteries, and associated control equipment.

Despite appearing somewhat similar to a conventional diesel electric locomotive, the BP4 has no diesel engine; battery charging is provided by plugging in an external power source. Battery life is extended by the use of regenerative braking, which returns power to the batteries. The BP4 is designed to operate 3 shifts on a single battery charge.

Appearance
This conversion significantly alters the external appearance of the locomotive, with the cab (which is actually brand new) being moved forward on the frame to make room for a large louvered battery box, which takes the place of the locomotive's long hood. The fuel tank is similarly replaced with another battery box.

BP4 development was undertaken by Norfolk Southern, along with Brookville Equipment, Penn State University, the United States Department of Energy, and the Federal Railroad Administration. Testing of this new technology continued through the end of 2009 at Norfolk Southern's Rose Yard in Altoona, PA. If considered successful, there are plans to build more units and perhaps apply the technology to helper and road locomotives of the future.

On September 28th, Today, Congressman Shuster joined Transportation Secretary Ray LaHood in unveiling a revolutionary new electric locomotive at the Norfolk Southern Juniata works in Altoona. The new engine, developed by Penn State and Norfolk Southern, with funding from Congress and the private sector, will help usher in a new generation of clean and green rail transportation.

NS No. 999, the only BP4 ever produced.  Norfolk Southern photo.