Altoona Works
Altoona Works (also known as Altoona Terminal) is a large railroad industrial complex in Altoona, Pennsylvania. It was built between 1850 and 1925 by the Pennsylvania Railroad (PRR) to supply the railroad with locomotives, railroad cars and related equipment. For many years it was the largest railroad shop complex in the world.

History
In 1849, PRR officials developed plans to construct a repair facility at a town newly established for this purpose, Altoona. Construction was started in 1850, and soon a long building was completed in the 12th Street area that housed a machine shop, woodworking shop, blacksmith shop, locomotive repair shop and foundry.

The 12th Street area facilities were replaced later by the Altoona Machine Shops. The first locomotive was built there in 1866. A total of 6,783 steam, diesel and electric locomotives were manufactured in Altoona between 1866 and 1946.

In time additional PRR repair facilities were located in Harrisburg, Pittsburgh, and Mifflin, and the Altoona Works expanded in adjacent Juniata. Inventor Alexander Graham Bell sent two assistants to the Altoona shops in 1875 to study the feasibility of installing telephone lines.

In 1875, the Altoona Works started a testing department for PRR equipment. In following years, the Pennsylvania Railroad led the nation in the development of research and testing procedures of practical value for the railroad industry. In 1905 a Stationary Testing Plant was installed at Altoona, after originally being installed, and used for locomotive testing, in 1904 as one of the PRR System exhibits at the Louisiana Purchase Exposition in St. Louis. Locomotives tested on the plant included T1 4-4-4-4 No. 6110 and Baldwin No. 60,000. Use of the testing facilities was discontinued in 1968 and many of the structures were demolished.

In May 1877, telephone lines were installed for various departments to communicate with one another.

Fort Wayne, Indiana, also held a key position for the railroad. By the turn of the 20th century, its repair shops and locomotive manufacturing facilities became known as the "Altoona of the West."

By 1945 the Altoona Works had grown to be one of the largest repair and construction facilities for locomotives and cars in the world. During World War II, PRR facilities (including the Altoona Shops) were on target lists of German saboteurs. They were caught before they could complete their missions.

Current facilities
Today, NS runs the locomotive shop at Juniata with about 1,100 employees. The Railroaders Memorial Museum is next to Altoona Works.

Later in the 20th century locomotive repair and manufacture of engine parts.

Built steam and electric locomotives during 1891-1946

Repair work only in the mid-20th century. 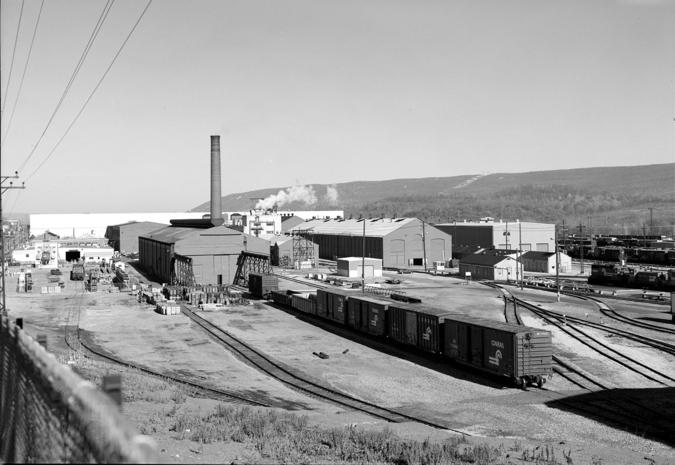 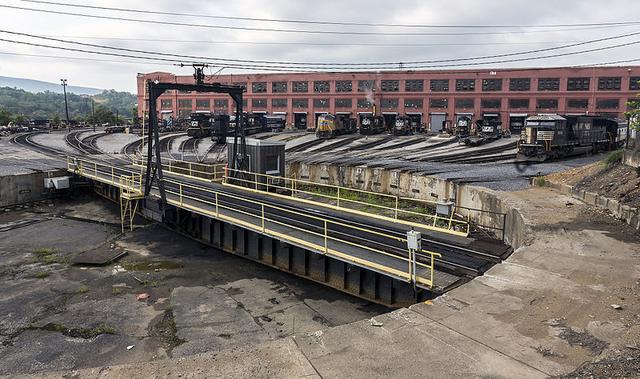 The turntable at the Norfolk Southern Altoona Works in 2014.

Juniata Shops at Altoona Works in 1988, during the Conrail era.  Library of Congress.