ATSF 3000 class 2-10-10-2. In this photo, the forward section of the boiler appears to be a primitive superheater and feedwater heater.

Although they appeared to have exceedingly long boilers, the barrel in front of the rear set of cylinders actually contained first a primitive firetube superheater for further heating the steam before use; the steam was carried forward from the boiler proper by outside steam pipes as shown in the photograph. Also in this space was a reheater for the high-pressure exhaust before it was fed to the forward low-pressure cylinders.

In front of that, there was a feedwater heater, a space where cold water from the tender could be warmed before being injected into the water proper. This worked similarly to the boiler itself; the firetubes passed through the feedwater tank. The ATSF 2-10-10-2, No. 3000 when built before the others, was the largest locomotive in the world from 1911 to possibly until early 1914.

"The first 2-10-10-2s were constructed in 1911 by the Atchison, Topeka and Santa Fe Railroad at a cost of $43,880 each. They were built out of existing 900 & 1600 class 2-10-2s with new front engines and tenders from Baldwin. They were used between Bakersfield and Barstow and up to San Bernardino. The railroad built 10 of these engines, which were cobbled together by the Santa Fe using existing 2-10-2 engine units united with low-pressure engine units supplied by Baldwin. Baldwin also designed and built the unusual "turtleback" tender that probably was designed to improve rearward vision.

A distinctive ribbed firebox trailed the long boiler. Like other Santa Fe Mallets, the actual tube length was relatively short, but a "reheater" ahead of the forward tube sheet and boiler joint was supposed to maintain steam heat as it traveled forward to the high-pressure cylinders. It added 2,659 sq ft, but was nowhere nearly as efficient as later superheater designs. The design was unsuccessful and the engines were converted back to 2-10-2 simple-expansion locomotives in 1915-1918."

2-10-10-2
Under the Whyte notation for the classification of steam locomotive wheel arrangements, a 2-10-10-2 is a locomotive with two leading wheels, two sets of ten driving wheels, and a pair of trailing wheels.

This wheel arrangement was rare. Only two classes of 2-10-10-2 locomotives have been built; the Atchison, Topeka and Santa Fe Railway's 3000 class, and the Virginian Railway's class AE. 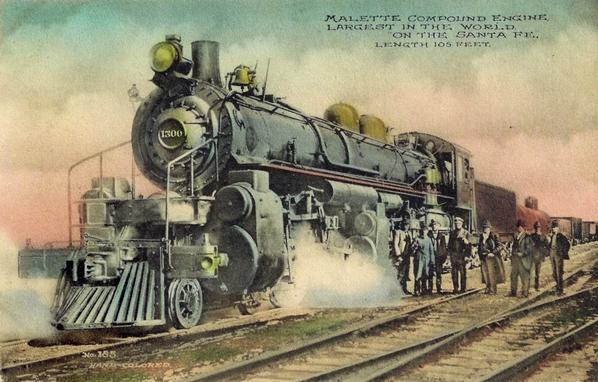 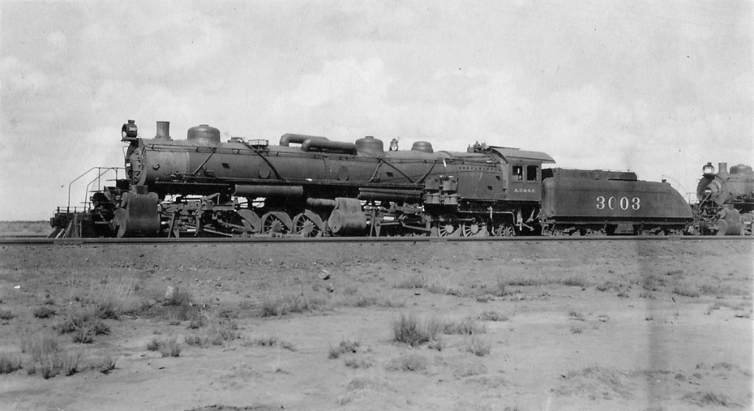 The Santa Fe's mighty 2-10-10-2 3000 Class articulated locomotive was once the largest locomotive in the world.