AT&SF No. 3715 on the way East, August 2, 2002 between Ludlow and Klondike, California, heading to Williams.  Photo by Drew Jacksich. 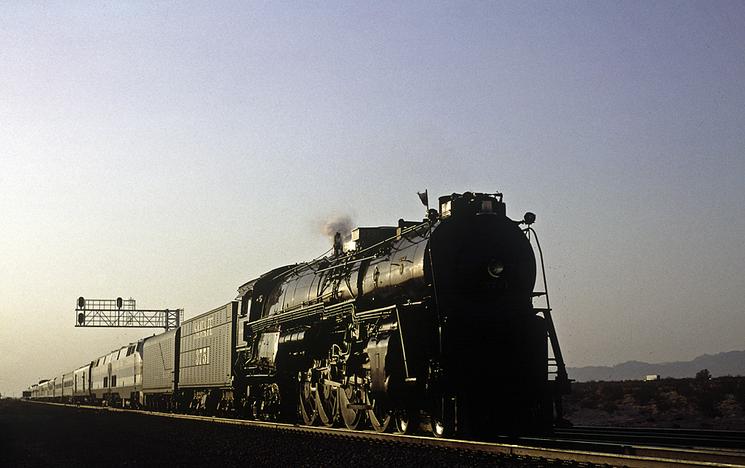 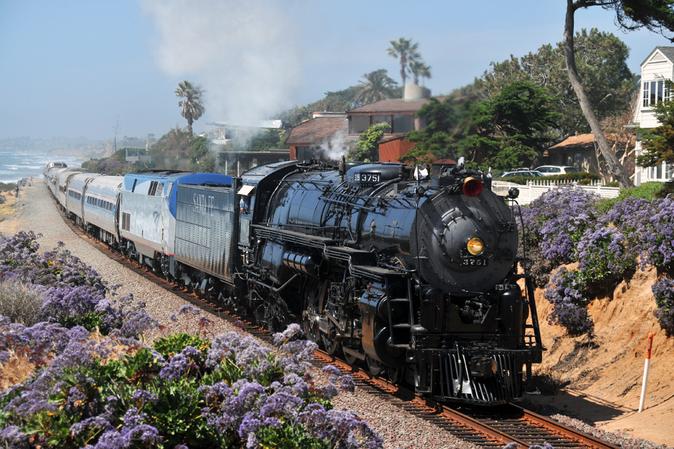 ​By The original uploader was Slambo at English Wikipedia - Transferred from en.wikipedia to Commons by IngerAlHaosului using CommonsHelper., CC BY-SA 2.0, https://commons.wikimedia.org/w/index.php?curid=9360550

1: Is the Metrolink diesel pushing the steam locomotive? No, the diesel is there to provide electrical power for the coaches, as well as dynamic braking. Listen at 7:55, that is the bark of a 1927 steam loco, not the rumble of a diesel.

2: Why is there no smoke? The fireman (the guy who makes the steam for the engineer to use) is firing the engine well. He is using as little fuel as possible, to make as much steam as possible. This means there is little smoke.

3: How much coal does it use? None. This locomotive was converted to burn atomized oil in 1936.

5: How did you work the camera while driving? I didn't. My dad was driving while I was filming from the back seat.﻿

History
Built in 1927 by the Baldwin Locomotive Works, 3751 was Baldwin's and the Santa Fe railway's first 4-8-4. It had a Santa Fe 5-chime freight whistle mounted on it. Tests showed that 3751 was 20% more efficient and powerful than Santa Fe's 4-8-2 3700 class steamer, which at the point was Santa Fe's most advanced steam locomotive. In 1936, the engine was converted to burn oil. Two years later, the locomotive was given a larger tender able to hold 20,000 gallons of water and 7,107 gallons of fuel oil. 3751 was also present at the grand opening of Union Station in Los Angeles on May 7, 1939 pulling the Scout, one of Santa Fe's crack passenger trains as it arrived from Chicago. It was the first steam locomotive to bring a passenger train into LAUPT. In 1941, along with other 4-8-4s, 3751 received major upgrades including: 80-inch drive wheels, a new frame, roller bearings all around, and more. That same year, it achieved its highest recorded speed at 103 mph. It continued to be a very reliable working locomotive until 1953, when it pulled the last regularly scheduled steam powered passenger train on the Santa Fe to run between Los Angeles and San Diego on August 25, this was its last run in revenue service. After that, it was stored at the Redondo Junction, California roundhouse in Los Angeles for four years before it was officially retired from the roster by the railroad in 1957, and in 1958 it was placed on display in San Bernardino.

Restoration
In 1981, the San Bernardino Railroad Historical Society was formed with intentions of restoring and operating 3751. Four years later, they achieved their goal when 3751 was sold to them with the condition that the SBRHS must restore and operate the locomotive. In 1986, 3751 was moved from its display to California Steel Industries, where it was restored at a cost of $1.5 million. In 1991, it operated for the first time in 38 years, running with two Santa Fe FP45's and 16 passenger cars on a four-day trip from Los Angeles to Bakersfield. Since then, it has been utilized for a large number of excursions and special trips as well as being on display at many events.

Mainline Excursion career
The locomotive is currently owned by the San Bernardino Railroad Historical Society, the same organization that performed the initial 1986 restoration. Some of the locomotive's excursion career include the following:

On August 1992, the 3751 was found on its largest assignment so far, as the engine ran the entire route of Santa Fe's Transcon route between Los Angeles and Chicago with three and later two Santa Fe C40-8Ws. The engine spent 18 days traveling over 2,300 miles (3,700 km) in both directions.

On June 1999, the locomotive participated in Railfair 99. On the way to the fair, 3751 ran with a BNSF C44-9W and a passenger train mixed with a boxcar train.

In October 2000, 3751 was listed on the National Register of Historic Places.

A second locomotive of the same class has also been preserved, Santa Fe 3759 in Kingman, Arizona. It too is listed on the NRHP.

The locomotive has been displayed at Fullerton Railroad Days in Fullerton, California a number of times.

In August 2002, the 3751 ran an Amtrak excursion from Los Angeles to Williams, Arizona to participate in the 2002 National Railway Historical Societ yConvention. The excursion ran over Metrolink, BNSF Railway, and Arizona and California Railroad tracks. The engine also ran on the Grand Canyon Railway for an excursion on the former Santa Fe's "Grand Canyon" line. The event including double and triple-heading with Grand Canyon Railway's own steam engines.

In 2008, 3751 ran on the Surfliner route for two excursions from Los Angeles to San Diego. The first, on June 1, was a public excursion which left 30 minutes late due to a delayed Metrolink train and arrived in San Diego 2 hours behind schedule, mostly caused by the single-track railroad south of Mission Viejo station. The excursion made the locomotive the first steam locomotive to run in the Surf Line since the 1976 American Freedom Train, it was also the first steam powered passenger train to make the run between Los Angeles and San Diego since 3751 last traveled the line in 1953. The train was turned at Miramar Wye, 15 miles north of San Diego station. The second excursion was a private car special on September 21. However, a trespasser was struck near Mission Viejo, delaying all trains up to 3 hours. The excursion passed the cleared location at around 9:00 pm.

In May 2010, the locomotive returned to the Surf Line for a third excursion from Los Angeles to San Diego, pulling eight Amtrak cars and a few dome cars, attracting large crowds. In order to alleviate issues with turning the train, the excursion was split over two days: south to San Diego on May 1, and north to Los Angeles the following day. This proved successful, as 3751 was on time into San Diego the first day and sustained only normal delays northbound, thus proving the excursion to be the most successful yet. The weekend after the trip to San Diego had the engine in San Bernardino for "National Train Day" as well as the 2010 San Bernardino Railroad Days festival. It made an annual run to San Bernardino for the Railroad Days Festival in April or May since the initial trip.

In May 2012, 3751 powered a six-day excursion from Los Angeles to Williams, Arizona to celebrate the state's Centennial. As part of the excursion a special round trip doubleheader to the Grand Canyon and back was run with 3751 and Grand Canyon Railway's former Chicago Burlington and Quincy 2-8-2 Mikado 4960. The train also operated over the Arizona and California Railroad on the way to Williams and on the return trip to Los Angeles. Three weeks before the trip to Arizona the engine also made the trip east to attend the San Bernardino Railroad Days Festival for the third year in a row.

In May 2013, 3751 ran on a fourth trip to the San Bernardino Railroad Days Festival.

In May 2015, 3751 made an appearance at Fullerton Railroad Days 2015 in Fullerton, California, making it the first time since 2008 to appear at this event. From April 31 - May 1, 2016, the locomotive was on display again and left Fullerton 2 hours late due to traffic.

In late 2017 the locomotive is expected to undergo its mandatory 15-year boiler inspection, which will take one to possibly two years to complete.

In media
3751 was also featured in the There Goes a... episode "There Goes a Train" footage used in "Route of the Chief".

Santa Fe 3751 can also be briefly viewed near the end of the 1952 film Boots Malone starring William Holden, and Harry Morgan.