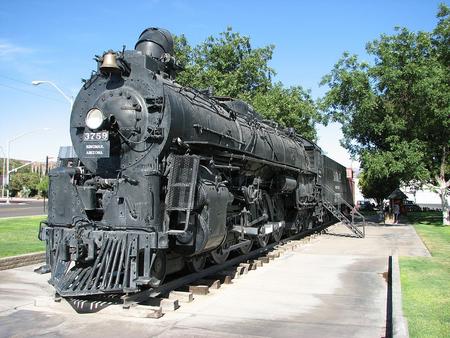 Santa Fe 3759
Atchison, Topeka and Santa Fe Railway 3759 is a standard gauge 4-8-4, Northern type, steam railway locomotive built by Baldwin in 1928. It is on display in Locomotive Park, located between Andy Devine Avenue and Beale Street in Kingman, Arizona. The park was established in August 1957 with AT&SF 3759 donated to the City of Kingman in recognition of Kingman's history with the railroad. The locomotive erroneously is termed a Mountain type on the nearby information plaque, and also in the City's descriptive material.

In February 1955, 3759 was brought out of retirement at the request of the Railway Club of Southern California for a special excursion run, dubbed "Farewell to Steam." This special ran on February 6, a round trip between Los Angeles Union Station and Barstow, California with stops in Pasadena and San Bernardino and was the last Santa Fe revenue steam train to leave Los Angeles and to traverse Cajon Pass. After this trip, 3759 went back into storage, until Santa Fe donated the locomotive to the city of Kingman in 1957.

The locomotive was added to the National Register of Historic Places as AT & SF Locomotive in 1986, reference number 86001113. In 1987 caboose 999520 was retired and donated to Kingman to be added behind 3759. The residents of Kingman pulled the locomotive forward 30 ft (9.1 m) to make room for the caboose. In January 1991, Grand Canyon Railway owner Max Biegert sent a letter to Kingman city officials of his proposal to lease AT&SF 3759 to operation and donate his engine No. 19 to the city. 3759 would have run in the Grand Canyon Railway and an "Orient Express"-styled train between Los Angeles and Williams, Arizona. The community reacted negatively to the plan and it did not go forward.