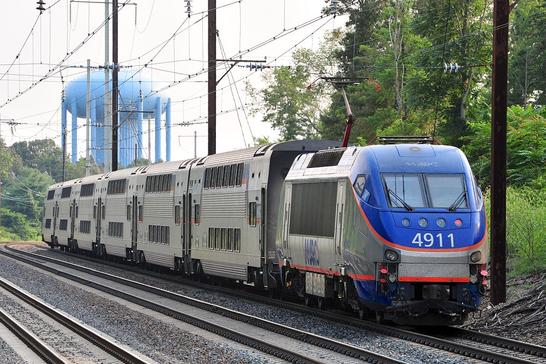 Bombardier–Alstom HHP-8 Electric Locomotive
The Bombardier–Alstom HHP-8 (High Horse Power 8000) is a type of twin-cab electric locomotive manufactured by a consortium of Bombardier Transportation and Alstom for use by Amtrak and the Maryland Area Regional Commuter system. The locomotive's electrical drive technology is directly derived from the SNCF BB 36000 manufactured by Alstom.

A small class size and reliability problems with correspondingly high per capita maintenance and replacement costs caused Amtrak to seek service replacements for its fifteen units at the same time as the older EMD AEM7s after only a decade in service. MARC plans to replace their HHP-8s by 2018.

Design
The locomotives have a 6 MJ crash energy absorbance structure; the carbody is stainless steel. The electrical traction system is directly derived from the system used on Alstom's BB 36000 Astride locomotives; this includes four 1.5MW three phase asynchronous traction motors powered by GTO based inverters, with one inverter per motor; the electric system also allows regenerative and rheostatic braking. The locomotives were designed for up to 217 km/h (135 mph) operation but are actually limited in service to FRA Tier 1 standards, operating up to 201 km/h (125 mph).

History
Amtrak ordered 15 HHP-8s in 1996, at the same time as the order for the Acela Express trainsets; the locomotives have similar external styling as the Acela trainsets, but are designed to operate as true locomotives, hauling conventional passenger rolling stock. The units supplemented the EMD AEM-7s and allowed the retirement of the GE E60.

The locomotive's original type designation was "HHL-8" for "HighHorsepower Locomotive, 8,000 (nominal) horsepower,but at some point early in its service life was changed to the more intuitive HHP-8.

Maryland Area Regional Commuter (MARC) also acquired six HHP-8s. The locomotives are used on its electrified Penn Line (which is part of the Northeast Corridor) between Perryville and Washington, DC.

From their delivery up until their retirement in November 2014 Amtrak operated 15 of the locomotives on the Northeast Corridor on Boston to Washington DC trains; racking up approximately 1,000,000 miles each in service (based on 2009 figure).

In 2002 Amtrak's fleet of 15 units was temporarily withdrawn along with the Acela Express trains due to cracks in components of the trucks.

Amtrak's HHP-8's suffered from low reliability. As a result, replacement of the fleet at the same time as the older AEM-7 locomotives became actively considered after only one decade in service, since a large order for a standardized fleet would have price economies, and the resultant fleet would have lower overall maintenance costs. A replacement fleet of 70 locomotives starting delivery in 2012 was planned, with HHP-8s kept as a reserve in the short term.

In October 2010 Amtrak ordered a fleet of 70 Siemens ACS-64 locomotives to replace both the HHP-8 and the older AEM-7 locomotives, with deliveries beginning in early 2013. Amtrak retired its last HHP-8 on November 7, 2014.

MARC will also retire the HHP-8 once the new Siemens Charger locomotives are delivered. Initial replacement is expected between 2017 and 2018.