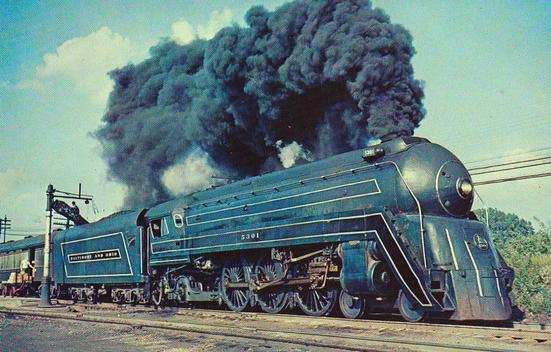 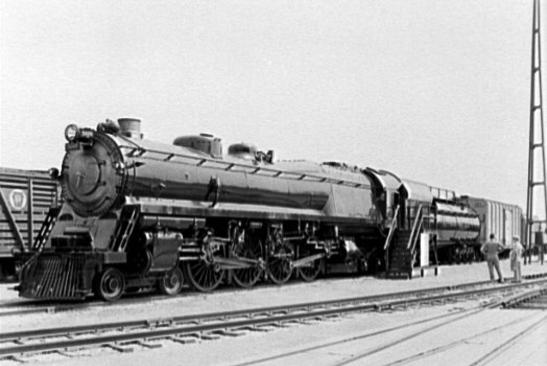 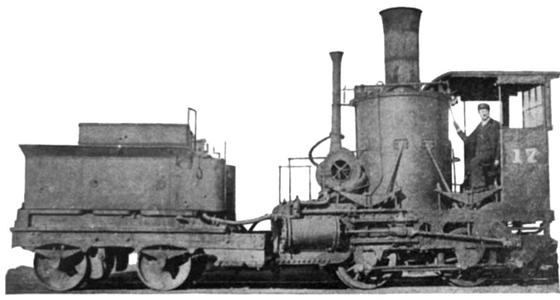 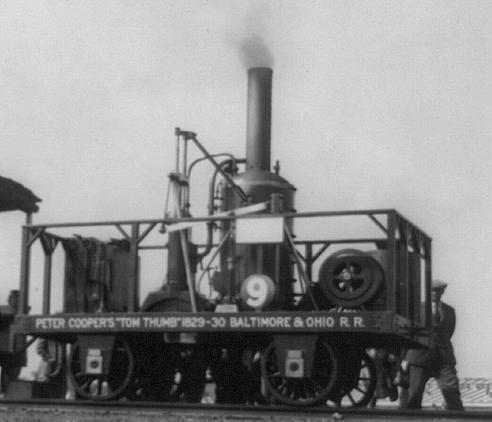 A Baltimore and Ohio Crab, the Mazeppa, built around 1837 and photographed after years of service.

History
Early locomotives
The name Tom Thumb is forever associated with the B&O, as the first steam locomotive built in the United States for an American railroad. It was built strictly as a demonstrator, but it was succeeded by a series of similar locomotives (the "Grasshoppers" and the "Crabs") designed by Ross Winans, the first head of motive power on the railroad. Early B&O designs were quite unlike those used on other roads, due to in-house design and the emphasis of pulling power. 4-2-0 locomotives from Norris (represented by the "Lafayette" reproduction in the B&O museum's collection) were the anomaly on a railroad which was already building eight-coupled (0-8-0) locomotives well before the Civil War. By the beginning of the war, new power on the railroad had become more conventional, though many of the older, unconventional designs remained.

The Baltimore Belt Line and electrification
John W. Garrett's desire to have a line to New York led to the construction of the Baltimore Belt Line in order to bring the railroad across Baltimore. The most important feature of this was the Howard Street Tunnel, which began at Camden Station and headed north to Mount Royal Station. Objections to use of steam led, in 1895, to the first main line electrification in North America. Trains in one direction were pulled through the tunnel, by a series of electric locomotives that lasted until the end of steam; in the other direction, the train simply drifted down the slope. Dieselization made the electrification unnecessary and it was discontinued in 1952.

"Old Maude"
Another innovation was the introduction of Mallet locomotives. Economies in haulage could be achieved by reducing the number of locomotives and trains needed, so ever more powerful locomotives were always sought. In 1900 No. 2400, a 0-6-6-0 design, was introduced, and quickly became known as "Old Maude" after a mule in a cartoon. "Old Maude" was renumbered to No. 7000 in 1915, and it boasted an impressive 71,500 pound tractive effort and was a great success at a Maximum speed of only 21 mph. It was the first Mallet in North America. Mallets were built in large numbers for the B&O, culminating in the huge EM-1 2-8-8-4.

"Uncle Dan" and Colonel Emerson
In the presidency of Daniel Willard, the motive power department, headed by Col. George H. Emerson, entered on a long series of experiments intended to improve the performance of the steam locomotive. Particular emphasis was placed on the water tube boiler, as opposed to the fire tube boiler used from the earliest days of steam. (In practice, only the firebox used water tubes.) The culmination of these experiments was the duplex No. 5600 George H. Emerson, the first of its kind. It was to be succeeded by a visionary locomotive of a unique design, of which very little was built before the whole project was cancelled.

Many other trials were conducted of steam locomotive appliances, very few of which had any lasting impact.

At the turn of the 20th century various compound locomotives were tried, particularly of the Vauclain and tandem patterns. As on other roads, they presented maintenance problems, and only the Mallets were repeated. Some engines had scoops to take on water from track pans, which were found on the line to New York.

The P-7 "president" engines were originally painted olive green, with the name of a United States president in gold on the cab; later they were painted a dark blue. Certain experimental engines had a British-style firebox door instead of the usual American Type.

Diesels
Other trials, it can be said, changed the face of railroading. In 1925 the B&O was one of the buyers of the first model of diesel locomotive, of which CNJ 1000 was the first example. These were used as yard engines in areas where smoke abatement led to restrictions or bans on the use of steam. In 1935 a single unit mainline diesel-electric engine (No. 50) was constructed; this was eventually transferred to the Chicago and Alton Railroad, an affiliated line.

Finally in 1937 the B&O bought the first multiple unit diesel locomotives to power its passenger trains. And in 1937 they ran the first coast to coast use of diesel electric locomotives. The railroad put an end to the steam locomotive experiments, though wartime pressures would lead to purchase of many other new steam locomotives. Dieselization took many years, and in the meantime a long program of upgrading older locomotives was continued. The P-7 Pacifics were particularly targeted for improvements, culminating in the Cincinnatian, for which four of the engines were upgraded and streamlined to a design by Olive Dennis, who also supervised the refurbishment of the rolling stock.

The B&O did not emphasize standardization, and when road diesels were bought, they were purchased from nearly every manufacturer. By the time of the railroad's purchase in 1963, though, they were well on their way to becoming the all-EMD line which they remained to the end.

Locomotive Classification
Before the Civil War, the B&O organized its locomotives into four classes, based upon relative power. After the war this was felt to be inadequate, and a classification scheme was devised, based upon wheel arrangement. Each wheel arrangement was assigned a letter, except for 4-4-0 locomotives, which were subdivided according to cylinder size. When articulated steam locomotives were first introduced, they were assigned a single class ("O"). This proved inadequate almost immediately and a two letter code was used instead, based on treating the locomotive as if it were two engines coupled back-to-back.

Within each letter class, a number was assigned for each successive design. Usually the first class was numbered "1". Locomotives acquired through mergers were renumbered and reclassified to fit into the sequences of numbers and classes.

Lowercase letter suffixes were used to denote successive modifications of a design. The "t" suffix was also used to indicate that the locomotive was assigned an extra large tender. In the 20th century, such modifications were common, and the pattern of suffixes could become confusing. At one point there was even a class "Qodd" Mikado (2-8-2).

Diesel locomotives were initially classified according to intended service and model. Eventually this was dropped in favor of using the manufacturer's model designations.

Steam classes were as follows:

Electric locomotive classes were as follows:

There was one gasoline-powered locomotive: