Baldwin DRS-4-4-1000 Diesel-Electric Road Switcher Locomotive
The Baldwin DRS-4-4-1000 was a diesel-electric road switcher produced by the Baldwin Locomotive Works from July, 1948–March, 1950. The units featured a 1,000 horsepower (750 kW), six-cylinder prime mover, and were configured in a B-B wheel arrangement mounted atop a pair of two-axle AAR Type-B road trucks, with all axles powered. They had a cast steel frame. The units were configured to normally run with the long hood in the forward position.

Only 9 were built for American railroads, with another 13 manufactured in January and February, 1949 by the Canadian Locomotive Company for the Esquimalt and Nanaimo Railway, the first railroad in Canada to dieselize its locomotive fleet. The DRS-4-4-1000 was (in most cases) visually indistinguishable from its 1,200 horsepower (890 kW) successor, the Baldwin RS-12. Only one intact example of the DRS-4-4-1000 is known to exist today (former CPR No. 8000), and is currently on display in Calgary, Alberta. 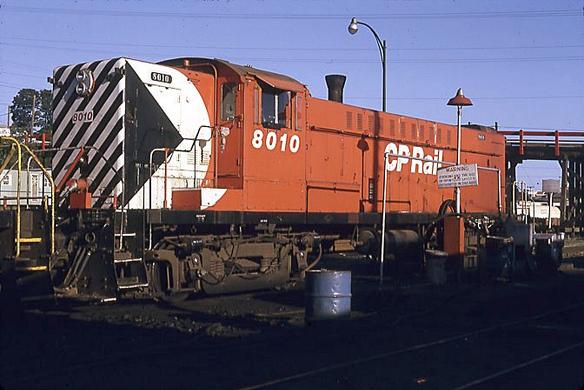