Baldwin-Westinghouse Electric Locomotives
Baldwin, the locomotive manufacturer, and Westinghouse, the promoter of AC (alternating current) electrification, joined forces in 1895 to develop AC railway electrification. Soon after the turn of the century, they marketed a single-phase high-voltage system to railroads. From 1904-05 they supplied locomotives carrying a joint builder's plate to a number of U.S. railroads, particularly for the New Haven (the New York, New Haven and Hartford Railroad) line from New York to New Haven, and other New Haven lines.

Experimental locomotives
In 1895 a box-cab locomotive 32 feet (9.8 m) long with two four-wheel trucks and weighing 46 short tons (41.1 long tons; 41.7 t) was built at the East Pittsburg (Pennsylvania) works of Westinghouse. It was used for more than a decade of AC and DC experimentation. Sold in 1906 to the Lackawanna & Wyoming Valley Railroad in northern Pennsylvania as a 600 hp (450 kW) 500 V DC locomotive, it was in service until 1953.

Indianapolis-Rushville interurban
In 1905 a 41-mile (65 km) interurban line between Indianapolis and Rushville, electrified by Baldwin-Westinghouse at 3300 volts single-phase AC, was opened by the Indianapolis & Cincinnati Traction Company.

New Haven Electrification
In 1905 New Haven investigated electrification for their 35 miles (56 km)-line from Grand Central Station to Stamford, with a possible extension to New Haven, Connecticut. Electrification for passenger service was required in New York. Operation of such trains to the suburbs was preferred to changing to steam outside New York. Electrification of the busy main line would increase the capacity of the existing four tracks. Proposals were obtained from General Electric (GE) and Westinghouse. Both companies submitted a variety of AC and DC schemes, though GE favoured DC electrification. But New Haven chose single-phase AC as proposed by Westinghouse, at 11 kV 25 Hz. The generating station was at Cos Cob.

The New Haven EP-1
An initial order of 35 EP-1 locomotives were supplied 1905-1907. The design was similar to No 9 above, with two two-axle trucks and a Westinghouse gearless quill drive, which supported the motor on the truck frame and reduced the unsprung weight. The locos weighed 102 tons and were 37 ft 6½in long. They had to operate over the 12 miles of New York Central track electrified at 660 V DC third rail from Grand Central to Woodlawn, so had AC/DC series commutator motors; the four Westinghouse 130 motors had a total hourly rating of 1,420 hp (1,060 kW). The loco could change from AC to DC without stopping; power pickup was by eight third-rail shoes which could be lowered, plus two large AC pantographs and a small pantograph for DC where short sections through switches were too complicated for third-rail supply. A second order of six supplied in 1908 had design changes, including guide wheels at each end to obviate “nose” or oscillation at high speed. The highly successful class operated to 1947, although some were retired from 1936.

New Haven experimental locomotives
In 1910 New Haven decided to extend electrification, and to electrify freight and switching as well as passenger service. Before placing a major order, the line ordered four experimental locomotives from Baldwin-Westinghouse, built in 1910-11. Three of them were numbered No 069, No 070, No 071. It is unclear as to the number of the fourth locomotive.

The New Haven EF-1
While three of the experimentals were equipped for passenger service, the EF-1 was intended for freight service. As such, it did not have train-heating boilers or third-rail DC equipment.

The Great Northern Z-1 class
Z-1 class locomotives were supplied to the Great Northern Railway for the new longer and lower Cascade Tunnel and the extended electrification of the line through the Cascade Range. They were used from January 1927 through the old tunnel, and the line through the new tunnel was opened in 1929. The old tunnel used three-phase power, so 8 miles of the overhead on the line to be abandoned was modified to single phase AC (11 kV, 25 Hz), and steam locos used over a short connecting section of line.

Two were supplied in 1926 and 3 in 1928. Each Z-1 locomotive had two semi-permanently coupled 1-D-1 box-cab units; the pair weighed more than 371 tons with an hourly rating of 4330 hp and a continuous tractive effort of 88,500 lbs per unit (177,000 lb per pair) and a maximum starting effort of 189,000 lb. The locos had a motor-generator set with a synchronous AC motor and DC generator which supplied the Westinghouse 356-A traction motors geared to each driving axle. They were equipped for multiple-unit control and regenerative breaking. A pair of Z-1s with four units could move a 2900-ton train over the 2.2% maximum gradient of the new Cascade line. 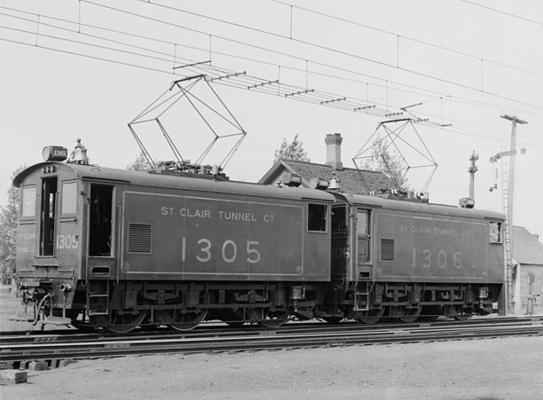