Lima Class A-1 2-8-4 Berkshire Locomotive
The Class A-1 Berkshire locomotive is a 2-8-4 steam locomotive first built in 1925 by the Lima Locomotive Works. The design was initially intended to improve on the company's USRA Mikado design (2-8-2), which was deemed to lack sufficient speed and horsepower. This was addressed by the inclusion of a larger, 100-square-foot (9.3 m2) firebox that required an extra trailing axle, giving the locomotive its distinctive 2-8-4 wheel arrangement.

The Berkshire locomotive was so named for its testing location on the Berkshire Hills of the Boston & Albany Railroad. After the Class A-1 successfully outperformed a Class H-10 Mikado, the Boston & Albany Railroad became the first to order the new Berkshires. Over 600 were built by the Lima Locomotive Works, the American Locomotive Company, and Baldwin Locomotive Works. A total of nineteen different railroads purchased Berkshires, including the Erie Railroad, who owned 105 Berkshires, more than any other railroad; the Chesapeake & Ohio Railway, who nicknamed theirs the Kanawhas; and the Louisville & Nashville Railroad's, whose locomotives were technically designated as Class M-1 but were referred to as "Big Emmas".

Nickel Plate No. 765 is one of two remaining operating Berkshire steam locomotives. Operated by the Fort Wayne Railroad Historical Society in Indiana, 765 has pulled numerous trains over decades of excursion service. Photo by Drew Jacksich.    By Drew Jacksich from San Jose, CA, The Republic of California - 07 25 09 107x, CC BY-SA 2.0, https://commons.wikimedia.org/w/index.php?curid=17931438 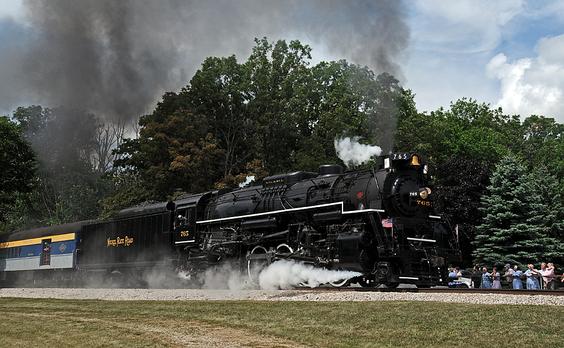