The Doble steam Car
The Doble steam Car was an American steam car maker from 1909-1931. Their latter models of steam car, with fast firing boiler and electric start, were considered the pinnacle of steam car development. The term "Doble steam car" comprises any of several makes of steam-powered automobile in the early 20th century, including Doble Detroit, Doble Steam Car, and Doble Automobile, severally called a "Doble" because of their founding or association with Abner Doble. The company was responsible for many groundbreaking patents regarding steam engines.

Besler Brothers
George and William Besler of Davenport, Iowa, the sons of William George Besler, acquired much of Doble Steam Motors plant and patents. William also acquired a Doble E series Phaeton, engine number 14, from a Dr Mudd. This car was still in existence in 2010.
They undertook further development work with Abner Doble and created an interurban car, a railcar, and a steam aircraft. The brothers modified a Travel Air 2000 bi-plane by replacing its petrol engine with a steam engine. The plane was successfully test flown on 12 April 1933 at Oakland Municipal Airport, California. In 1936 the New Haven Railroad tested the Besler streamliner, a two-car steam railcar. 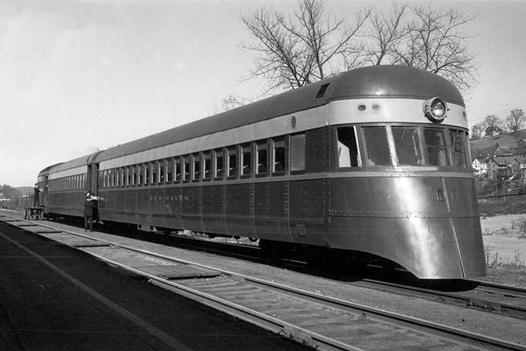 The New York, New Haven and Hartford's Streamliner No. 9610, "The Blue Goose."

William and George Besler designed steam engines including one for a train. The "Besler" train was a two-car self-propelled mini-train with a small steam engine in one car, known informally as the "Blue Goose". Numbered 9210-9211, it ran from 1936 to 1943, mostly on the Naugatuck Valley line between Waterbury and Bridgeport but had frequent mechanical problems and so was never successful enough to be duplicated. Gas-electric railcars, and then the Budd RDC, got the branchline market that Besler was looking for. Following its retirement, the Besler set was de-powered, broken up, and the two cars continued in service a while longer on the NH as a standard coach and combine.

In the mid-1950s Henry J. Kaiser asked William Besler to convert his 1953 Kaiser Manhattan to steam. Besler completed this in either 1957 or 1958. The engine was described as a V4 single acting uniflow with trunk pistons. It was a cross compound with piston valves across the high pressure heads. Kaiser apparently did not take the car back and left it with Besler.

In 1969 GM introduced two experimental steam powered automobiles. One was the SE 124 based on a converted Chevrolet Chevelle and the other was designated SE 101 based on the Pontiac Grand Prix. The SE 124 had its standard gasoline engine replaced with a 50 hp power Besler steam engine, using the 1920 Doble patents. The SE 101 had a GM designed steam engine that had been developed in consultation with Besler.

Consultancy
Following the collapse of their company, Abner & Warren Doble traveled as steam power consultants. Abner first went to New Zealand in March 1930, where he worked for A & G Price Limited on the development of steam buses, while from 1932-1933 Warren was in Germany managing a contract for Henschel & Son of Kassel, who went on to build a variety of steam applications including a speedboat, cars, railcars, buses, and trucks. The exact numbers of vehicles built are difficult to determine. Henschel did build 10 articulated steam trucks for Deutsche Bahn railways as delivery trucks. Abner was involved in the development of a steam bus for the Auckland Transport Board while in New Zealand.

From 1931-1935 Abner worked with Sentinel Waggon Works of Shrewsbury, England. Several shunting locomotives (switchers) and an undetermined number of railcars were fitted with Doble/Sentinel machinery for sale to customers in Britain, France, Peru, and Paraguay. In 1937 Abner, writing in Autocar, stated that any new steam cars would have to be superlatively good to compete with gasoline powered cars of the day. He still considered it just possible with good management and a lot of money.

Ultimax Engine
Abner Doble's last consultancy was in the development of the Paxton Phoenix car, for the Paxton Engineering Division of McCulloch Motors Corporation, Los Angeles. The project was for a low-weight car built around a unique "torque box" chassis based on an aeronautical wing section. The Doble Ultimax steam unit was developed as one of two possible power plants, the other being an original design of two-stroke I.C. engine. The Ultimax was designed to operate at a pressure of 2,000 PSI and 1,200 °F and actually ran at about 1,560 psi and 900 °F with a nominal boiler pressure of 2,000 psi and flow rate of 900 lb/hr. The engine was an ingenious three-crank tandem (or steeple) compound engine with three pairs of vertical single-acting cylinders arranged in such a way as to give a double-acting effect. Its sustained maximum power was 120 bhp; peak power was 155 bhp but could not be held due to insufficient steam flow. The expected average water rate was 9 lb/hp/hr. The project was eventually dropped in 1954.