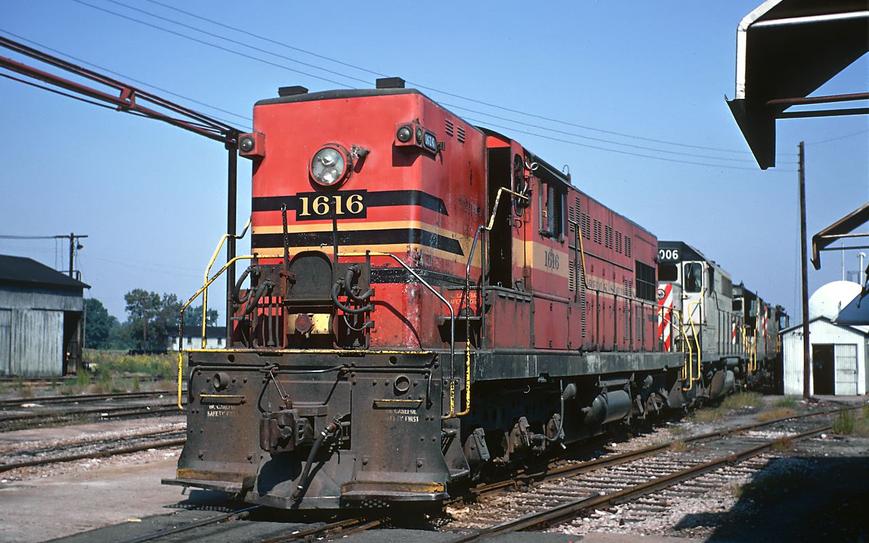 Original Norfolk Southern Baldwin Road Switcher AS-416 No. 1616 at Chesapeake, Virginia in old paint scheme in October of 1968.  Photo by Roger Puta.

Baldwin AS-416 Diesel-Electric Locomotive
The Baldwin AS-416 was a diesel-electric locomotive of the road switcher type rated at 1,600 hp (1,200 kW), that rode on three-axle trucks, having an A1A-A1A wheel arrangement.

Used in much the same manner as its four-axle counterpart, the Baldwin AS-16, though the wheel arrangement spread out the axle load for operation on light rail such as are found on branch lines.

It was introduced in 1950 as a replacement of the DRS-6-4-1500 and remained in Baldwin's catalog until their cessation of locomotive manufacture in 1956.

Only 25 units were sold to four railroads — all of whom had bought the earlier model. The vast majority (17 of the 25 units) were purchased by the original Norfolk Southern Railway (1942–82), becoming a signature locomotive for the company.

Columbus and Greenville No. 606, at the Illinois Railway Museum
Norfolk Southern No. 1616, at the North Carolina Transportation Museum.