By The original uploader was Slambo at English Wikipedia. - Transferred from en.wikipedia to Commons by Oxyman using CommonsHelper., CC BY-SA 2.0, https://commons.wikimedia.org/w/index.php?curid=7132786 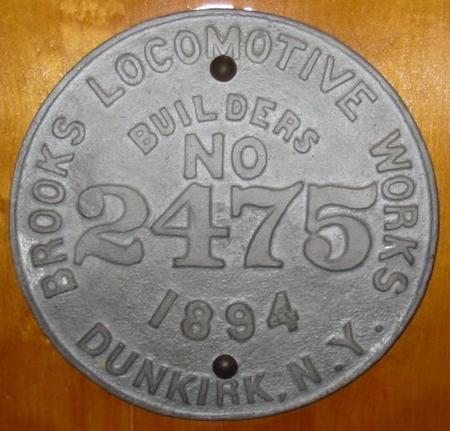 By The original uploader was Slambo at English Wikipedia. - Transferred from en.wikipedia to Commons by Oxyman using CommonsHelper., CC BY-SA 2.0, https://commons.wikimedia.org/w/index.php?curid=7132719

History
When the New York and Erie Railroad (NY&E) relocated its shops facilities from Dunkirk, New York, to Buffalo in 1869, Dunkirk lost its largest employer. Coming to the city's rescue was Horatio G. Brooks (1828–1887), the former chief engineer of the NY&E who was at the controls of the first train into Dunkirk in 1851. In 1869, Brooks leased the Dunkirk shops facility from the NY&E and formed the Brooks Locomotive Works. The new company officially opened on November 11, 1869. The company's first steam locomotive is completed the following month as part of an order for the NY&E, the company's first customer.

After the financial crisis of 1873, orders for new equipment dropped off, but Brooks was able to recover enough business to avoid bankruptcy. Brooks locomotives were displayed a few years later at the National Railway Appliance Exhibition in Chicago, where they were judged the Best in Show.

The 1890s brought another period of depressed sales following another financial crisis. The company produced 226 new locomotives in 1891, but only 90 new locomotives in 1894. Brooks was not able to recover business as easily and the company was merged with several other manufacturers in 1901 to form the American Locomotive Company. ALCO produced locomotives at this facility until 1934 when the shop was renamed ALCO Thermal Products Division. Locomotives produced at the former Brooks plant after ALCO's formation came to be known as ALCO-Brooks locomotives.

Although new locomotives were no longer being produced at the former Brooks shops in Dunkirk, shop forces were kept busy for some time building spare parts for ALCO locomotives. Production had shifted from locomotives to heat exchangers, high-pressure vessels and pipes of all sizes.

After World War II, production at the Dunkirk plant never got back to its prewar levels. ALCO finally closed the facility in 1962.

Preserved Brooks locomotives
Brooks Locomotive Works sold locomotives to all of the major railroads of the late 19th century. Following is a partial list (in serial number order) of Brooks-built locomotives that have been spared the scrapper's torch.

Owners: Utah and Northern Railway No. 23, then No. 80; Pacific and Arctic Railway and Navigation Company No. 51

Disposition: On static display in Tooele, Utah at the Tooele Valley Railroad Museum, last used in operational service in 1962.

Disposition: On static display at the Chautauqua County Fairgrounds, Dunkirk, NY, 3 miles from where it was built.