Design
The BL20GH uses a V12 MTU-Detroit Diesel 12V4000 engine rated at 2,250 horsepower (1,680 kW). It has a separate Caterpillar engine for head end power, allowing the locomotive to be used in passenger service for branch line shuttle trains. The Metro-North locomotives are equipped with Automatic train control (ATC). The BL20GH is a low-emissions locomotive.

History
Brookville built a single demonstrator for the Connecticut Department of Transportation (CDOT); CDOT and the Metro-North combined to order eleven more in 2008, for a total of twelve locomotives. CDOT owns six of the locomotives, which it painted in its "McGinnis" paint scheme, named after former New York, New Haven and Hartford Railroad president Patrick B. McGinnis. This scheme consists of a black nose, with a white stripe and an orange rear, with white New-Haven lettering overlapping the orange rear. The first public run occurred on June 9, 2008.

These locomotives are used in branch service on the Metro-North Railroad, including the Danbury Branch and Waterbury Branch. They are used on shuttle trains operating on routes where there is no third rail (such as the tracks from Southeast to Wassaic). They lack third-rail shoes and thus rarely operate into Grand Central Terminal.

Variants
A nearly identical locomotive, known as the BL20G, operates on the Staten Island Railway. Four were built by Brookville Corporation in December 2008. They look a lot like the BL20GH, but one can tell the difference by looking at the vents at the end of the locomotive. In addition, these locomotives are only used for work trains, and thus will never be seen hauling a passenger train unless there is an emergency.

By Jim.henderson (Own work) [CC0], via Wikimedia Commons 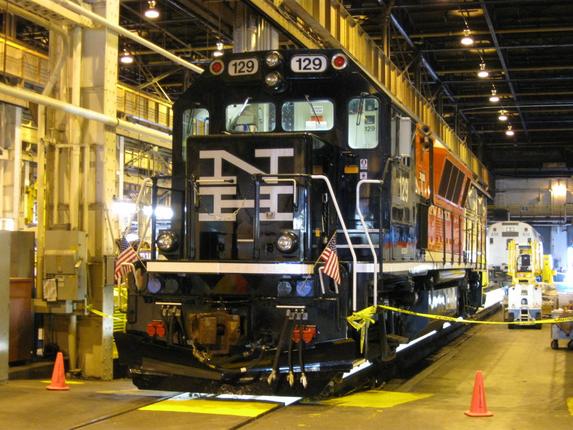