Front and right side of C&O 1308, a Chesapeake and Ohio Railway preserved 2-6-6-2 today located on Memorial Boulevard in Huntington, West Virginia. Built in 1949 by Baldwin Locomotive Works, the locomotive is listed on the National Register of Historic Places. 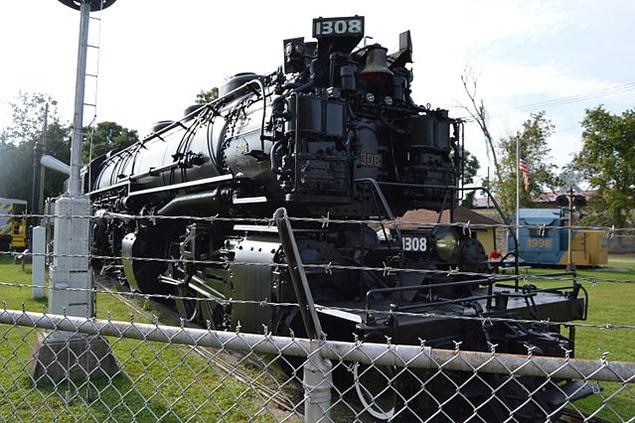 Chesapeake & Ohio 1308 H-6 Class 2-6-6-2 Articulated Steam Locomotive
Chesapeake & Ohio Railway 1308 is a 2-6-6-2 Mallet articulated locomotive built by Baldwin Locomotive Works in 1949. It was the next to the last Class 1 mainline locomotive built by Baldwin, closing out more than 100 years of production, a total of more than 70,000 locomotives. The last locomotive, its sister, 1309, is being restored to operational condition at the Western Maryland Scenic Railroad.

While 1308 is a very modern locomotive, with roller bearings, mechanical lubricators, stoker, and superheater, it was the last of a series of 2-6-6-2s that the C&O began in 1911. A very similar design, the USRA 2-6-6-2 was chosen by the United States Railroad Administration as one of its standard designs thirty years earlier during World War I. The advantage of the design was that it could be used on the relatively light, tightly curved, branch lines in West Virginia and Kentucky coal country, and that's where it worked for its seven year working life, making the two-hour run from Peach Creek, near Logan, West Virginia to the Ohio River at Russell, Kentucky with an occasional trip to Hinton, West Virginia. Its use in heavy mountain railroading is emphasized by its two cross compound air compressors mounted on the smokebox door to supply enough air for frequent heavy braking.

The class was unusual for the time in that they were true Mallets, since their steam was expanded once in their smaller rear cylinders and then a second time in their larger front cylinders. While compound locomotives are more efficient than single expansion, their extra complication led to very few United States railroads using them after the turn of the century. The C&O had a long history with Mallets and they were ideal for slow speed work in West Virginia.

After its last run on February 29, 1956, it was stored at Russell until the C&O gave it to the Collis P. Huntington Railroad Historical Society, Inc., a group founded in 1959. Collis P. Huntington is best known as one of the Big Four who built the Central Pacific Railroad from San Francisco to Promontory, Utah, but following that he spent at least ten years as a leading figure of the C&O. The town where 1308 sits is named for him.

The locomotive was added to the National Register of Historic Places as Chesapeake and Ohio 1308 Steam Locomotive in 2003.