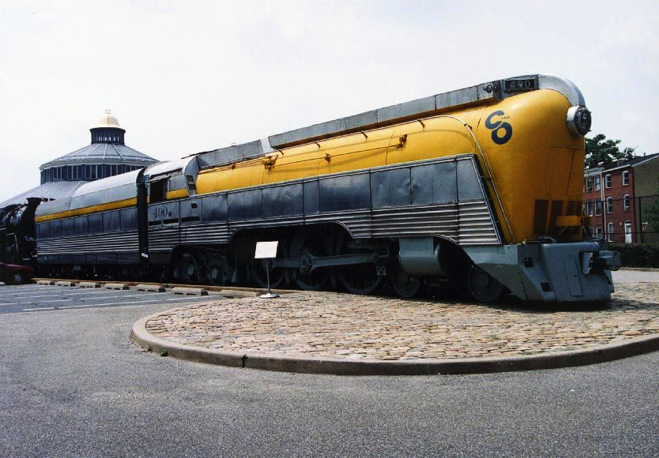 The C&O class L-1 was a streamlined 4-6-4 "Hudson" steam locomotive built by the Chesapeake and Ohio Railway (C&O). The locomotives featured a distinctive streamlined yellow cowl and stainless steel fluting. The L-1 Class locomotives were originally built by ALCO-Richmond for the Chesapeake and Ohio Railway in 1926. All five were formerly Class F-19 4-6-2 "Pacific" locomotives built for the C&O and were used on passenger trains on the mainline east of Charlottesville and west of Clifton Forge. By 1930, F-19s were pulling the "Sportsman", the premier C&O passenger train at the time, and later were hauling the "George Washington". These 4-6-2s operated between Cincinnati and Washington until 1942 when they were by new Baldwin 4-8-4's. The 4-6-2s continued to pull secondary passenger trains during World War II.

Near Total Rebuild
Even though it was called a rebuild, the 20-year-old locomotives retained little of their former equipment. Improvements included a one-piece cast frame with integral cylinders and a main air reservoir; roller bearings on all axles and in the main and side rods and multiple-bearing crossheads now replaced the alligator type used on the F-19; new drivers that were carefully cross-counter-balanced to enable high-speed operation; an entirely new structure inside the boiler, reusing only the outer shell, with 41 tubes of 2.25'' outside diameter and 195 flues of 3.5'' O.D.; a renewed but otherwise unchanged firebox; a Type E superheater, replacing the Type A of the F-19, and providing increased super-heater heating surface (2,001 sq. ft., a 65% increase) and 250¬ of superheat rather than 150¬ in the Type A; higher boiler pressure (210 psi vs. 200 psi); cylinders of the same size (27'' x 28'') newly equipped with Franklin Type A poppet valves (oscillating cam type); a four-wheel trailing truck with a Franklin type E-I high speed booster; a more efficient Worthington feedwater heater taken from an F-17 Pacific, which got the Elesco feedwater heater from the F-19; and a new, larger cab.

C&O Class L-1 No. 490 on display at the B&O Railroad Museum in Baltimore, Maryland.