Design
The design of the M-1 was a collaboration between the C&O, the Baldwin Locomotive Works and Westinghouse. The C&O possessed substantial coal-hauling revenue and was loath to abandon it as a fuel source. Further, C&O's engineering staff expressed concern that oil reserves would be exhausted within 25-30 years. The locomotive contained a single Westinghouse turbine which in turn drove four direct current (DC) generators, mounted in pairs. Each generator produced 1,000 kilowatts (1,300 hp), and the four generators collectively turned eight traction motors.

Defying the usual convention, the M-1 was arranged with its boiler in the rear and the coal bunker in the front. The turbine-generator system meant that the M-1 contained no cylinders. The reduced number of moving parts meant that, in theory, the M1 required far less maintenance than a conventional steam locomotive. Its designers predicted that it could make the run from Washington to Cincinnati—and back—without servicing.

The locomotive's throttle included eleven settings, ranging from one (idling) to eleven (full speed). The locomotive's cruising speed was 70 miles per hour (110 km/h), at which point the throttle was on "seven." During a trial run with a reporter from Popular Mechanics aboard, a C&O engineer expressed his dissatisfaction with a local speed limit of 75 miles per hour (121 km/h), noting that he would "sure like to be able to pull it back to eleven!" Not including research and development, the three locomotives cost $1.6 million.

Career
The C&O cancelled the Chessie in 1948, before it ran in revenue service, depriving the M-1s of their reason for existence. The M-1s themselves proved expensive to operate and mechanically unreliable.[4]:202 They spent their short careers operating between Clifton Forge and Charlottesville, Virginia. The locomotives were scrapped in 1950. 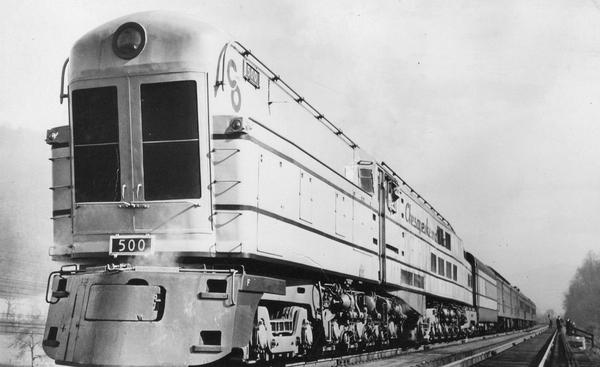 Chicago Railroad Fair, 1949. This is the Chesapeake and Ohio Railway's "500" streamlined steam turbine locomotive for passenger train use. There were 3 of these new in 1948 and 1949, but the railroad kept running into various mechanical issues with them. They were taken from service and scrapped by 1950.

A postcard photo of Chesapeake and Ohio Railway's M-1 No. 500, a coal-fired steam turbine locomotive. 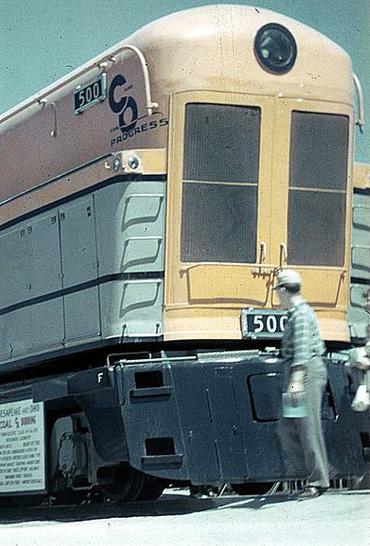