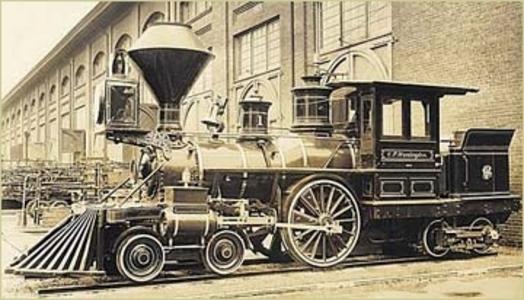 C. P. Huntington after its 1888 rebuild in Sacramento.

History and career
C. P. Huntington was originally purchased by Central Pacific Railroad (CP) in 1863 as that railroad's number 3, along with its sister engine T. D. Judah (CP No. 4). It was CP's third locomotive after Gov. Stanford (number 1, built by Norris Locomotive Works) and Pacific (number 2, built by Mason Machine Works). CP used the locomotive beginning on April 15, 1864, during construction of the western portion of the First Transcontinental Railroad in North America.

Southern Pacific (SP) purchased C. P. Huntington from CP on February 5, 1871, gave it their number 1, and used it in light service in northern California. It was rebuilt twice, first in 1873 with new valves and again in 1888 with a new boiler built by CP's Sacramento shops. In 1888 the locomotive was also put on public display for the first time in Sacramento.

In SP's 1891 renumbering plan, C. P. Huntington was assigned road number 1001. The locomotive was placed in storage for some time until it was rebuilt for use as a trackside weed burner in 1901. Its use as a weed burner proved unsatisfactory and the locomotive was again removed from active service. In 1910, C. P. Huntington was again rebuilt and it was then kept at SP's machine shops where it remained for a few years. The locomotive was nearly scrapped in 1914; it was spared this fate by SP management so that it could be displayed at the Panama–Pacific International Exposition in 1915 after a cosmetic restoration.

C. P. Huntington is on static display at the California State Railroad Museum.

Working replicas
Chance Rides began to fabricate their 2 ft (610 mm) narrow gauge C.P. Huntington locomotive in 1960. Powered by a gasoline, propane or Diesel engine to an automatic transmission then a 90 degree drop down gearbox to drive shafts to the front and rear power trucks. Its drive wheels are not powered, but roll on the rails and fake side rods reciprocate in and out of fake cylinders. The false drive wheels have been removed by some owners for ease of maintenance. This has been the most popular park train since The Allan Herschell Company merged into Chance Industries and the S-24 Iron Horse train production ceased. There are three C.P. Huntington replicas operating the perimeter track at the Santa Barbara Zoo.

The Lincoln Children's Zoo in Lincoln, Nebraska, operates a 2 ft (610 mm) narrow gauge C.P. Huntington locomotive on its ZO&O Railroad train ride around the park. Established in 1963 as the Iron Horse Railroad, the first C.P. Huntington locomotive was delivered to the Lincoln Children's Zoo founder, Arnot R. Folsom, by Richard H. Chance, President of Chance Rides in Wichita, Kansas. The first engineer hired by Folsom in 1963 was a local high school student, J. D. Ayres, who worked as a seasonal employee building the railroad track prior to the Zoo's opening. In October 1963, the city of Lincoln staged a Golden Spike Ceremony attended by the Mayor, City Council, and other local dignitaries. The ceremonial Golden Spike was an actual track spike of a type used extensively in building the railroad, but which had been gold plated for the event. The Iron Horse Railroad operated successfully as the primary revenue generator for the Lincoln Children's Zoo prior to the grand opening in 1965.

The unique design of the C. P. Huntington inspired the appearance of The Little Engine That Could in most storybook renderings.