Rail locomotives
In steam locomotive design, a cab forward design will typically have the driver's compartment (or cab) placed forward of the boiler at the very front of the engine. On a coal-fired locomotive, the fireman's station remains on the footplate behind the firebox so as to be next to the tender. On an oil-fired locomotive, the fireman's station could be (and normally is) in the forward cab. This type of design was widely, though not commonly, used throughout Europe in the first half of the 20th century, often in conjunction with an enclosed body design and/or streamlining.

Visibility is greatly improved from the cab, and fumes from the chimney do not fill a forward cab in tunnels. However, the crew's prospects in the event of a collision are worse, and if the driver and fireman are in separate places it is difficult for them to communicate, just as in autotrains.

Southern Pacific
The best known example of the cab-forward design in the United States, the Southern Pacific Cab-Forward (also known to a lesser extent as "Cab-in-fronts" and "Cab-aheads") placed the cab at the front by the simple expedient of turning the entire locomotive, minus the tender, by 180 degrees. This arrangement was made possible by burning fuel oil instead of coal.

The cab forward design was widely used by the Southern Pacific Railroad, which developed it to deal with the peculiar problems of its routes. The 39 long tunnels and nearly 40 miles (64 km) of snow sheds of the Sierra Nevada Mountains could funnel dangerous exhaust fumes back into the crew compartment of a conventional locomotive. After a number of crews nearly asphyxiated, the locomotive was run in reverse. This meant that the tender was leading the train, which introduced new problems. The tender blocked the view ahead and put crewmen on the wrong sides of the cab for seeing signals. The tenders were not designed to be pushed at the lead of the train, which limited speeds. Southern Pacific commissioned Baldwin Locomotive Works to build a prototype cab-forward locomotive, then ordered more units before the prototype had even arrived.

All of the cab-forwards were oil-burning locomotives, which meant there was little trouble involved putting the tender at what would normally be the front of the locomotive. The oil and water tanks were pressurized so that both would flow normally even on uphill grades. Visibility from the cab was superb, such that one crewman could easily survey both sides of the track. There were concerns about what would happen to the crew in the event of a collision, and at least one fatal accident occurred on the Modoc Line in Herlong, California when a moving locomotive struck a flat car. Turning the normal locomotive arrangement around also placed the crew well ahead of the exhaust fumes, insulating them from that hazard. One problematic aspect of the design, however, was the routing of the oil lines; because the firebox was located ahead of the driving wheels (instead of behind them, the usual practice), oil leaks could cause the wheels to slip. A nuisance under most conditions, it resulted in at least one fatal accident. This occurred in 1941 when a cab-forward with leaking steam and oil lines entered the tunnel at Santa Susana Pass, near Los Angeles. The tunnel was on a grade, and as the slow-moving train ascended the tunnel, oil on the rails caused the wheels to slip and spin. The train slipped backwards and a coupler knuckle broke, separating the air line, causing an emergency brake application and stalling the train in a tunnel that was rapidly filling with exhaust fumes and steam. The oil dripping on the rails and ties then ignited beneath the cab, killing the crew.

No other North American railroad ordered cab-forward locomotives, although some, like Western Pacific, did consider the type. Built to deal with difficult terrain, these locomotives became an easily recognizable symbol of the Southern Pacific. In total 256 such articulated locomotives, in three different wheel arrangements, were eventually placed on SP's roster. One example of the type, Southern Pacific 4294, is kept at the California State Railroad Museum in Sacramento, California. It is a 4-8-8-2 locomotive and is the only one to escape being scrapped. It was also SP's last new steam locomotive, built in 1944.

The North Pacific Coast Railroad, later part of the SP-owned Northwestern Pacific company, rebuilt an 1875 4-4-0 into the first cab-forward locomotive. This innovative engine was built by William (Bill) Thomas, the NPC master mechanic who was nationally known and holder of a number of patents. Thomas used the running gear and frame from NPC locomotive 5, the "Bodega", which had been wrecked in 1897, to build NPC 21. With the addition a new and unusual marine boiler and an all-steel cab, installed in reverse order from standard engines, this unique creation earned Thomas a patent on the locomotive design. No. 21 entered service in 1900, but only lasted a few years due to design flaws in the boiler. The crews were not satisfied with the new engine, finding it difficult to operate, with fears of the possible results of a collision. They dubbed it "The Freak".

Southern Pacific cab forward class AC-8 No. 4202 with the passenger train Overland Limited at Reno, Nevada. This type of locomotive was built and delivered to the railroad in 1939. 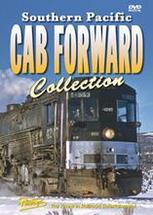 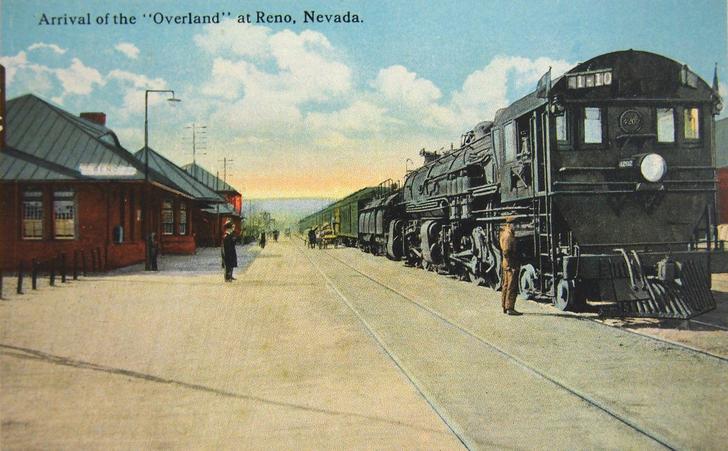