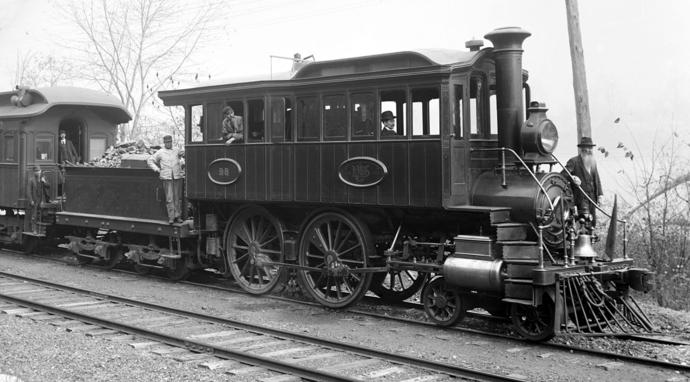 A camelback locomotive of the Central Railroad of New Jersey, built by the Baldwin Locomotive Works, ca. 1912. 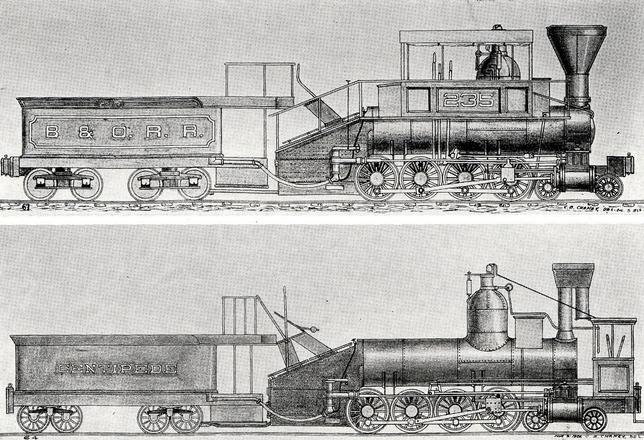 A Schenectady (Alco) Consolidation built for the Delaware, Lackawana & Western.

The Erie Railroad's L-1 class were the largest camelbacks built, and the only articulated examples. 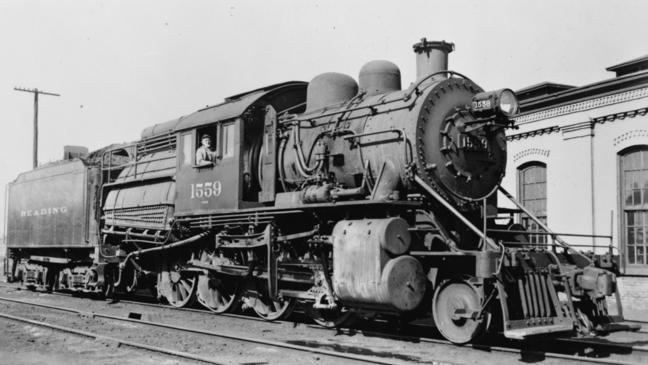 Camelback Locomotives
A camelback locomotive (also known as a Mother Hubbard or a center-cab locomotive) is a type of steam locomotive with the driving cab placed in the middle, astride the boiler. Camelbacks were fitted with wide fireboxes which would have severely restricted driver visibility from the normal cab location at the rear.

Development
The camel and the camelback design were developed separately by two different railroads in different eras. Though the name is often incorrectly used interchangeably, they had little in common other than the placement of the cab. Unlike the later Camelbacks, Camels had cabs that rode atop the boiler. Camelbacks have a cab that straddles the boiler. While Camelbacks have the same idea of moving the cab forward, they had it for different reasons. Winans wanted to put as much weight on the driving wheels as possible to increase traction. Camelbacks were developed to allow for the use of larger fireboxes, such as the Wooten, which could not be encompassed by a cab. Camelbacks were particularly known for being used on the Central of New Jersey.

Early use
The Baltimore and Ohio Railroad began to look into developing high-powered steam locomotives in the early 1840s, and in 1844–1847 built a series of locomotives nicknamed "muddiggers". As with many early B&O locomotives, a spur gear drive was used to connect the main shaft to the driving wheels. The long 0-8-0 wheelbase pushed this connection to the back of the locomotive and caused the floor of the cab to be lifted up above the whole assembly.

In 1853 Ross Winans, who had designed the "muddiggers", built the first of a series of 0-8-0 camel locomotives. These had long cabs that ran from the back of the smokebox to the front of the firebox. The firebox itself sloped back on the earliest models. The fireman worked from a large platform on the tender, and in some cases had a chute to allow him to deliver coal to the front of the grate.

Also in 1853, Samuel Hayes, the Master of Machinery for the railroad, had built a series of camel 4-6-0 locomotives for passenger service. The layout of the locomotive was roughly the same as for Winans' freight locomotives, except for the addition of the four-wheel leading bogie. Copies and variations on these locomotives were built into the 1870s, with the last retirements coming in the 1890s. These were called the "Hayes Ten-Wheelers".

The B&O examples burned conventional bituminous coal. The large fireboxes of these locomotives were made obsolete by better boiler design.

The B&O Railroad Museum has recently restored their Camel Locomotive and returned it to display. It now is in its original colors and markings for the first time since it left the Mt. Clare Shops in 1869. The Museum also has a Central of New Jersey Camelback, the No. 592, which was donated to the Museum in the 1950s.

The Wootten Firebox
John E. Wootten developed the Wootten firebox to effectively burn anthracite waste, which was a plentiful, cheap source of fuel. Wootten determined that a large, wide firebox would work best. As the successful trailing truck used to support large fireboxes had not yet been developed, Wootten instead mounted his huge firebox above the locomotive's driving wheels. The problem now arose that with a cab floor at the then standard tender deck height, it would be impossible for the locomotive's engineer to see forwards around the firebox shoulders. Instead, a cab for the engineer was placed above and astride the boiler. The fireman, however, remained at the rear with minimal protection from the elements. This gave rise to the unusual shape of the camelbacks.

First Camelbacks
The first camelback, a 4-6-0, was built in early 1877 by the P&R's Reading, Pennsylvania shops. It proved a success; the fuel cost saving was about $2,000 a year (approx. $30,000 now). More were built for many of the railroads operating in the anthracite regions, and some others, of many different wheel arrangements. The largest ones had a 0-8-8-0 arrangement and were the only articulated camelbacks built.

Safety Concerns
The Camelback's design raised concerns for its crew. The engineer was perched above the side-rods of the locomotive, vulnerable to swinging and flying metal; if anything below should break. In addition, the fireman was exposed to the elements at the rear. The Interstate Commerce Commission banned further construction of camelbacks, but gave exceptions to allow some to be completed. In 1927, further orders were completely prohibited on grounds of safety.

Many camelbacks were converted into end-cab locomotives. The advent of the mechanical stoker and its associated underfloor machinery placed cab floors and tender decks higher, and from that vantage point the engineer could see ahead.

Camelback inspection locomotive of Delaware, Lackawanna and Western Railroad, circa 1900.