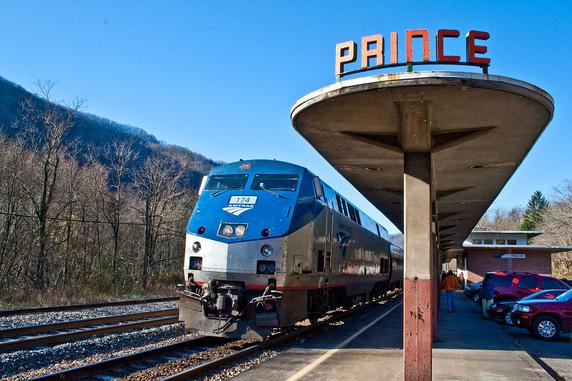 The Amtrak Cardinal
The Cardinal is a tri-weekly long-distance passenger train operated by Amtrak between New York Penn Station and Chicago Union Station, with major intermediate stops at Philadelphia, Washington, D.C., Charlottesville, Charleston, Huntington, Cincinnati, and Indianapolis. Trains depart New York on Sundays, Wednesdays, and Fridays, and depart Chicago on Tuesdays, Thursdays, and Saturdays. The 1,146-mile (1,844 km) trip between the termini of the route takes 26 1⁄2 hours.

The Hoosier State once provided service on the 196-mile (315 km) segment of the Cardinal route between Indianapolis and Chicago on the four days of the week when it was not otherwise provided by the Cardinal, however, the Hoosier State's last day of operation was June 30, 2019.

History
The Cardinal is the successor of several previous trains, primarily the New York Central (later Penn Central) James Whitcomb Riley and the Chesapeake and Ohio Railway (C&O) George Washington. The James Whitcomb Riley was a daytime all-coach train which operated between Chicago and Cincinnati (via Indianapolis), while the George Washington was a C&O sleeper that ran between Cincinnati, Washington, D.C., and Newport News, Virginia. Up until the late 1950s, the Riley would carry the Washington's sleeper cars between Cincinnati and Chicago. Both routes survived until the formation of Amtrak in 1971.

Amtrak kept service mostly identical at first. Through Washington–Chicago and Newport News–Chicago coaches began operating July 12, and a through sleeping car began September 8. Throughout the 1970s Amtrak would drop the George Washington name and re-route the train off the rapidly deteriorating Penn Central track in Indiana. The Newport News section ended in 1976, replaced by the New York–Newport News Colonial.

The James Whitcomb Riley was renamed the Cardinal on October 30, 1977, as the Cardinal was the state bird of all six states through which it ran. However, due to poor track conditions in Indiana, the train was rerouted numerous times, first over various Penn Central/Conrail routes, then ultimately over the former Baltimore and Ohio route via Cottage Grove by 1980.

The Cardinal was eventually extended from Washington, D.C., to New York City in an effort to improve the Cardinal's cost recovery ratio, but the entire train was discontinued on September 30, 1981. A congressional mandate initiated by Senator Robert C. Byrd (D-WV) resurrected the train on January 8, 1982, and followed another new route, via Richmond, Indiana, and Muncie, Indiana. This arrangement lasted until April 27, 1986, when the train was finally moved to its current route via Indianapolis.

Plans
In the July 2010 issue of Trains magazine, the Cardinal was noted as being one of five routes under consideration for performance improvement. For the Cardinal, the proposed changes include:

In addition, Railfan and Railroad magazine suggested that the train be rerouted to St. Louis as well, with a separate section bound for Chicago.

In early October 2010, Amtrak released a report detailing plans to increase the Cardinal's service from three trains a week to daily service, as well as increasing the train's on-time performance and food service. The January 2011 issue of Trains later revealed that Amtrak would scrap re-routing and Superliner conversion and instead adopt not only daily service, but also purchasing dome cars to be used along the Chicago-Washington, D.C., portion of the trip. In addition, the routing into Chicago Union Station would be changed and station platforms along the route containing coal dust would be scrubbed and cleaned.

Train consist
In the early 1990s, the Cardinal ran with the usual Amtrak long-distance consist of two F40s/E60 plus several MHC and material handling baggage cars, followed by several Amfleet coaches, an Amfleet lounge, a Heritage diner, two or three Heritage 10-6 sleepers, a slumbercoach, and finally, a baggage dormitory car. Following the delivery of the Superliner II fleet, however, the Cardinal was re-equipped with Superliner cars in 1995. As a result, its route was truncated to end in Washington D.C. as the Superliner equipment could not run into New York City due to low clearances there. With the Superliner equipment, the consist would usually be two Superliner sleeping cars, a diner, a Sightseer Lounge, a baggage coach, and a coach.

In 2002, two derailments on other routes took numerous Superliner cars out of service. Because of this, insufficient Superliner equipment was available for use on the Cardinal. The Cardinal was re-equipped with a consist of single-level long-distance cars, including dining, lounge, sleeping, and dormitory cars, although service to New York was not restored until 2004. Subsequent fleet shortages shortened the Cardinal further, and at one point, the train was running with two or three Amfleet II coaches and a combined diner-lounge car. While the sleeping car was later restored, the Cardinal has not had a dormitory car or a diner since. Similarly, though the baggage car was also removed, it was restored in response to an upturn in patronage in mid-2010. In 2016, Amtrak added business class service to the Cardinal.

The Cardinal's current typical consist is, from front to back, a single locomotive, a Viewliner II baggage car, one or two Viewliner I sleeping cars, one Amfleet I Club-Dinette business class car, a single Amfleet II Diner-Lite diner-lounge car, and two to four Amfleet II long-distance coaches.

Route overview
The Cardinal's route is one of the most scenic in Amtrak's system. After an early morning departure from NYC, the train passes through Virginia's rolling horse country, across the Blue Ridge and the Shenandoah Valley. Then the train climbs the Allegheny Mountains and stops at the resort town of White Sulphur Springs, with its famous The Greenbrier hotel. The Cardinal descends on tracks through the New River Gorge National River, a unit of the National Park Service protecting the longest deepest river gorge in the Eastern U.S. The river is popular for white water rafting, and the cliffs attract rock climbers. The forests blaze with autumn foliage and the train usually sells out during the peak season. The Cardinal will often add the only remaining full-length dome car in Amtrak service, car number 10031, to the consist in the autumn to try to accommodate the leaf peepers.

The schedules are timed to provide a daylight transit of the New River Gorge almost all year. So westbound, the train travels at night from Charleston, West Virginia, on to Indianapolis, where it arrives about dawn, reaching Chicago in mid-morning. Eastbound the Cardinal departs late afternoon, reaching Indianapolis before midnight, Charleston mid-morning, and NYC in the late evening. Unfortunately, Cincinnati is served both directions with stops after midnight, yet about 15,000 passengers a year arrive or depart from this station.

The Cardinal is one of only two of Amtrak's 15 long distance trains to operate only three days a week, the other being the Sunset Limited.

Amtrak's Cardinal has stopped to pickup and discharge passengers in Prince, WV. The former C&O station is usually very quiet except when Amtrak makes it's three times a week stops.    By jpmueller99 from Shenandoah Valley of VA, USA - Amtrak's The Cardinal - Prince, WV, CC BY 2.0, https://commons.wikimedia.org/w/index.php?curid=17031818 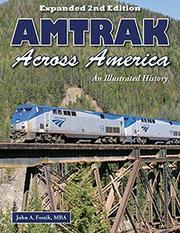