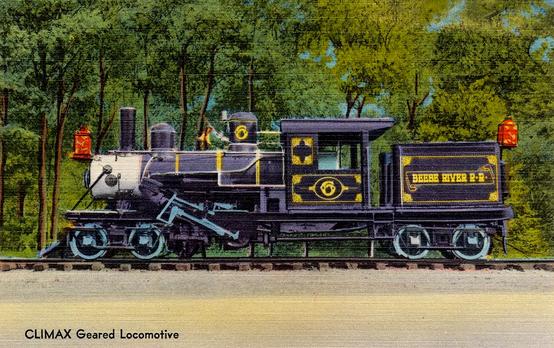 By SoftwareSimian (Own work) [CC BY-SA 3.0 (http://creativecommons.org/licenses/by-sa/3.0) or GFDL (http://www.gnu.org/copyleft/fdl.html)], via Wikimedia Commons 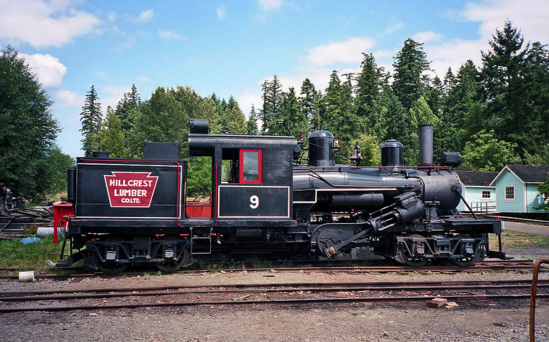 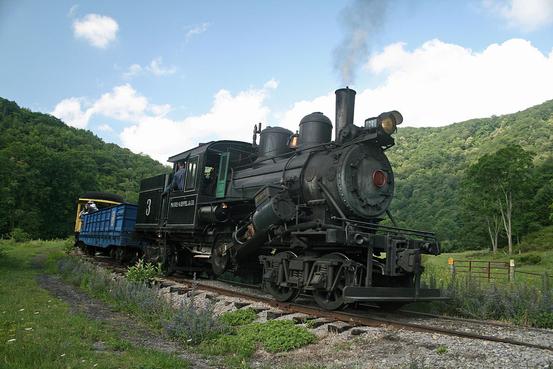 Climax Locomotives
A Climax locomotive is a type of geared steam locomotive in which the two steam cylinders are attached to a transmission located under the center of the boiler. This transmits power to driveshafts running to the front and rear trucks.

Rush S. Battles patented the basic design in 1891. Battles' design had horizontal cylinders connected to the drive shaft through a 2-speed transmission. The drive shaft passed just above the axle centers, requiring the use of hypoid bevel gears to transfer power to each axle. Unlike the later and somewhat similar Heisler design, there were no side rods on the trucks and all gearing was open, exposed to the elements. Battles' patent describes the core design that became the Class B Climax, and his patent illustrations show the name Climax emblazoned on the locomotive cab.

Charles D. Scott, an inventor who had previously proposed a less successful geared steam locomotive, patented improved versions of Battles' trucks in 1892 and 1893. Scott's 1892 patent was the basis of the Class A Climax. His 1892 patent included gear-case enclosures.

All Climax locomotives were built by the Climax Manufacturing Company (later renamed to the Climax Locomotive Works), of Corry, Pennsylvania. In addition, an agency and service facility was established in Seattle, Washington to sell and maintain locomotives for west coast buyers. Production began in 1888 and the last Climax locomotive was produced in 1928. Between 1000 and 1100 were built.

Many loggers considered the Climax superior to the Shay in hauling capability and stability, particularly in a smaller locomotive, although the ride was characteristically rough for the crew.

Class A
These featured a steam engine unit with two vertical cylinders mounted in the center of the locomotive. Class A Climaxes had a frame similar to a flatcar with wooden boxcar-like bodywork built up above it to protect the crew and fuel from the elements—this could be more or less covering between locomotive to locomotive. The front half of the locomotive, in front of the engine unit, contained the boiler. In smaller examples this may have been a vertical boiler, while in larger ones a tee boiler was employed. Class A Climaxes were small locomotives, generally under seventeen tons. Class A Climaxes, unlike Heisler and Shay locomotives, had two-speed gearboxes.

Class B
Looking more like a regular locomotive, the Class B Climax had the cylinders either side of the boiler, permitting it to be longer and larger than possible with the Class A arrangement. The two cylinders drove a transverse shaft that was geared to the longitudinal driveshaft in the middle; on early Class B climaxes, the cylinders were horizontal and pointing forwards, while later ones had the cylinders angled upwards at about 30 degrees from horizontal. Class B Climaxes weighed approximately 17 tons at minimum to a maximum of approximately 60 tons.

Class C
As in the Shay locomotive, a class C was a three-truck design, the additional powered truck being beneath a water-carrying tender articulated to the locomotive. This allowed the locomotive to operate for longer periods of time before needing to stop for water. All Class C locomotives had inclined cylinders. A fictional character from Thomas & Friends, named Ferdinand, is a Climax class C.

Survivors
Approximately 20 Climax locomotives survive in North America, of which about five are operational. Two survive in Australia: No. 1694, restored and operational since 8 September 2013, at the Puffing Billy Railway, in Belgrave, and No. 1653, on display at Hobart, Tasmania.

The New Zealand Climaxes are: No. 522, stored at Tokomaru, No. 1203, stored in Shantytown near Greymouth, No. 1317, under static restoration at Te Awamutu, and No. 1650, as of 2013 under restoration at Pukemiro. Hence four of the seven B-class Climax locos delivered to New Zealand have survived.

The Climax locomotive at the Cass Scenic Railroad State Park in West Virginia is currently being restored by the Mountain State Railroad & Logging Historical Association.

The White Mountain Central Railroad located off Interstate 93 in Lincoln, New Hampshire uses Climax No. 6 as the primary or main locomotive.

The "Durbin Rocket", of the Durbin and Greenbrier Valley Railroad in Durbin, West Virginia, is hauled by a Climax on its regular excursions.

The Corry Historical Museum in Corry, Pennsylvania has a Climax on display in its own exhibit room inside the museum, with the locomotive sitting on a section of track. The museum is open from 14:00 to 16:00 on weekends from Memorial Day to Labor Day, and admission is free.

Conversions
A number of Climaxes, especially Class A, were later converted to diesel or gasoline power, and some still exist in this form, using the original frame and drive mechanism.

In fiction
In the animated television series Thomas & Friends, the character of Ferdinand is based on a Climax locomotive.

By jpmueller99 from Shenandoah Valley of VA, USA [CC BY 2.0 (http://creativecommons.org/licenses/by/2.0)], via Wikimedia Commons