The Chicago, Milwaukee, St. Paul and Pacific Railroad (Milwaukee Road) classes EF-4 and EP-4 comprised 12 electric locomotives built by General Electric as part of a larger 20-unit order for export to the Soviet Union (USSR) in 1946. The locomotives had twelve axles, eight of them powered, in a 2-D+D-2 arrangement. They were originally designed to operate on Soviet Railways (SZhD) 3,300 volt DC overhead line system.

History
GE built 20 locomotives of this type, but they were prohibited from delivering them to the Soviet Railways (SZhD) due to relations between the US and USSR deteriorating into what became known as the Cold War. Fourteen were built to the track gauge of 5 ft (1,524 mm) and the final six were built to 4 ft 8 1⁄2 in (1,435 mm) standard gauge.

Milwaukee Road
The Milwaukee Road had offered to buy all twenty, plus the spare parts inventory, for $1 million, little more than scrap value—an offer which GE accepted. However, the Milwaukee's Board of Directors would not release the money. After the start of the Korean War, the Milwaukee needed more locomotives on their electrified mainline, and was also beset by a coal strike which necessitated sending most diesels back East (Milwaukee Lines East steam engines still burned coal, unlike Lines West steamers which were oil-burning). The Board of Directors returned to GE only to discover that eight locomotives and all the spare parts had been sold, and that the price for the remaining twelve locomotives was $1 million. Of the eight sold, three had gone to the Chicago South Shore and South Bend Railroad (the South Shore Line), and five to the Companhia Paulista de Estradas de Ferro of Brazil.

The Milwaukee's operating employees referred to the units as Little Joe Stalin's locomotives which was eventually shortened to simply Little Joe.

Performance
As originally tested, the Milwaukee was not impressed with these locomotives, finding them prone to wheelslip. The World War I-vintage General Electric motor-generator substations had difficulty supplying more than two EF-4s under heavy load, which meant that their true ability could not be demonstrated. Additionally, the controls were initially labeled in Russian. After being modified with increased weight, and provided with adequate power, the EF-4s were excellent performers and very reliable. Some substations were later modified to supply up to 3,400 volts to take advantage of the high power of these locomotives.

Modifications
Later modifications to the EF-4s included the removal of driving controls and windows at one end to permit the relocation of new, improved main circuit breakers into a cooler environment. (The model for this modification was the EP-4s, in which the Milwaukee Shops replaced the operating controls in the "B" end with a steam generator before they entered service.) The loss of this cab was operationally inconsequential, as many Milwaukee electric locomotives were normally turned at the end of their runs in Avery, Deer Lodge or Harlowton, the road having preferred to maintain only one set of controls even on double-ended units. The most important and final major modification was the provision of multiple unit controls for trailing diesel-electric locomotives. This system was designed in-house. It was not uncommon to see several diesel-electric locomotives being led by, and controlled from, one or two Joes (or a set of Boxcabs) in the 1960s and 70s.

Like almost any locomotive class, the Little Joes were occasionally involved in wrecks. One such, in 1966, resulted in the E78 being rebuilt (back east in the Milwaukee Shops) to a slightly different appearance from the other 11 units, due to the use of a pair of stainless steel side ventilation grilles intended for use on EMD F-units.

Usage
The Milwaukee Road used two for passenger service, designated class EP-4 (2-D+D-2), and the remaining ten for freight, designated class EF-4. They were used on the railroad's electrified Rocky Mountain Division in Montana and Idaho to take the place of older GE boxcab electrics that had been operating there since the 1920s. They were never used on the road's electricfied Coast Division in Washington, as none of that division's substations were upgraded to accommodate them. Three had been delivered in standard gauge, while the rest were converted to standard gauge in the Milwaukee's shops.

The EF-4s performed well, so much so that Milwaukee management soon desired to utilize the two EP-4s exclusively on freights. This was being done by 1956, when the passenger Joes were replaced by newly migrated EP-2 Bipolars. After the latter turned out to be ill-suited to the Rocky Mountain Division, they and the EP-4s were replaced by three-unit lashups of EMD E-unit and/or FP7 diesels which hauled the Olympian Hiawatha end-to-end, unassisted, until its discontinuance in 1961. Neither EP-4 received the post-1955 Union Pacific-inspired Armour Yellow, red and gray paint scheme used on Milwaukee passenger power, such as the Bipolars and GE Passenger Motors.

The Little Joes lasted until the end of electric operation on the Milwaukee on June 15, 1974. By that time, they were the Milwaukee's only electric road locomotives, all the GE Freight Motors (except two which were used together in MU as the Harlowton switcher) having succumbed to old age.

South Shore Line
The South Shore, while primarily a commuter railroad between Chicago, Illinois, and northwestern Indiana, used them in freight service. They had to be modified to operate on 1500 V DC catenary, and were delivered with roller bearings on all axles as on the Milwaukee EP-4s. In service on the South Shore the “Little Joe” name was not generally used; the locomotives were referred to as “800s”. Two of the three lasted until 1983, making them the last electrics in regular mainline freight service on a US common-carrier railroad. Today, freight trains are pulled by diesel-electric locomotives.

Brazil
The Companhia Paulista de Estradas de Ferro converted its locomotives to its 5 ft 3 in (1,600 mm) gauge. They became known as Russas, and stayed active through each re-organization of the Brazilian railways, finally ending up with FEPASA in 1971. They continued to operate until 1999, becoming the last representatives of their class in revenue service. It was at this point that FEPASA was privatized, and electric operation was immediately ended.

Survivors
Milwaukee Road: Milwaukee No. E70 is on static display at Deer Lodge, Montana.
South Shore: South Shore #803 is preserved, in operational condition, at the Illinois Railway Museum (IRM). South Shore No. 802 is preserved and on public display at the Lake Shore Railway Historical Museum in North East, Pennsylvania, 10 miles (16 km) away from Erie, where the GE Locomotive Assembly Plant that constructed the Little Joes is located. 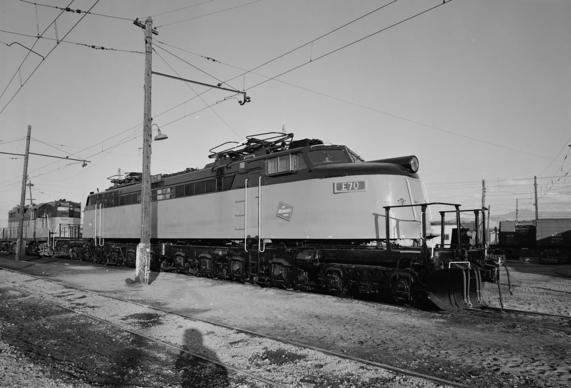