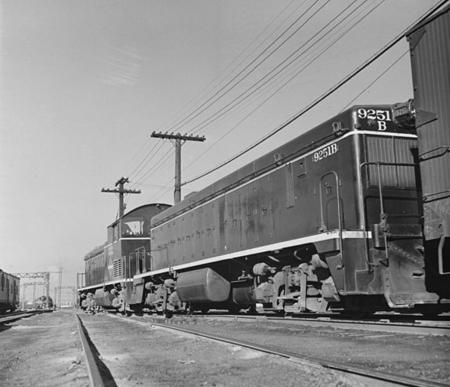 Cow-calf
In North American railroading, a cow-calf (also cow and calf) locomotive is a set of switcher-type diesel locomotives. The set usually is a pair; some 3-unit sets (with two calves) were built, but this was rare. A cow is equipped with a driving cab; a calf is not. The two are coupled together (either with regular couplers or a semi-permanent drawbar) and are connected with MU cables and brake lines so that both locomotive units can be operated from a single cab.

Cows are analogous to A units and calves to B unit road locomotives. Both have prime movers. Like the early EMD FT locomotives, the Cow-calf sets were typically built as mated pairs, with the Cow (or cabbed unit) and calf (or cabless unit) sharing a number. However this was not always the case, with over time many of the sets being broken up and couplers added to aid with versatility.

Most cow-calf sets were built between the 1930s and the 1950s. They were built by several different makers, although General Motors' Electro-Motive Division built far more than the others. As originally constructed, the cow-calf units were typically used in hump yards where they spent much of their life pushing long trains over the hump for classification. There were, however, a few notable cases where this was not so, with some industrial railroads using non mated pairs as light road switcher locomotives. However, as with the larger three unit Cow-calf sets, such was very rare.

The cow-calf concept was adopted on Queensland 2 ft gauge sugar cane railways with two locomotives being coupled permanently in multiple-unit mode with the cab of one removed. This was utilized by Isis Mill (1980-1993) and by Mackay Sugar (2005).

The concept was also used in the United Kingdom by British Rail to produce the unique Class 13 locomotives, composed of two Class 08 locomotives. British terminology is master-and-slave unit.

Cow-calf locomotives can be distinguished from the sometimes very similar looking slug and slug mother sets by the fact that both cows and calves are independently powered, while slugs are engineless, and dependent on power from their "mother" units.

Some cow-calf models include: