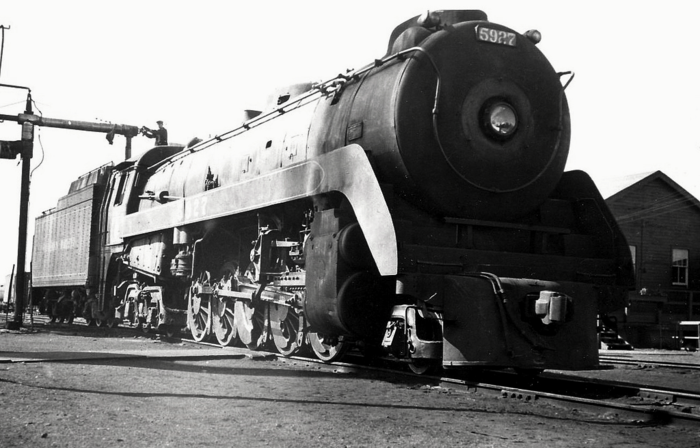 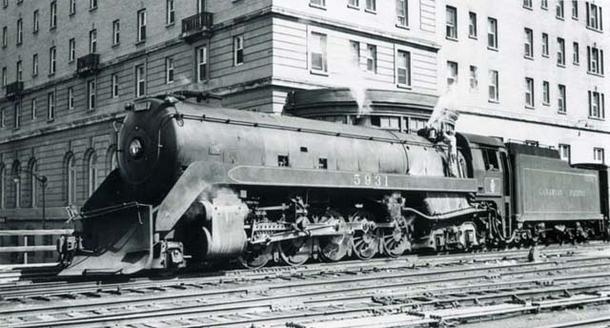 Canadian Pacific T1b class No. 5927 takes on oil at the South Edmonton shops in the summer of 1957.

The first of these large engines, which had a 2-10-4 wheel arrangement, was built in July 1929. Altogether, twenty were constructed before the end of this year bearing numbers 5900 to 5919. The Canadian Pacific Railway's classification was T1a. These locomotives weighed 375 tons (340 t) fully loaded. They were the largest and most powerful non-articulated locomotives in the British Empire. They were named after the Selkirk range of mountains that they crossed, the (railway) summit of which was located just inside the western portal of the Connaught Tunnel beneath Rogers Pass.

Montreal Locomotive Works built another ten of these successful mountain locomotives during November and December 1938. The Canadian Pacific Railway assigned them T1b class. They were numbered from 5920 to 5929. Modifications led the T1b to be ten tons or tonnes lighter while increasing steam pressure from 275 to 285 pounds per square inch (1.90 to 1.97 MPa). A further six Selkirks, classed T1c, were built by the Montreal Locomotive Works shop in 1949. They were the last standard gauge steam locomotives built in Canada for a Canadian railway. They were much the same as the T1b except for a few refinements, including two cross-compound air compressors to speed recharging of the air brake system. Some small streamlining touches were not retained. The streamlined casing around the smokebox stack was now absent as was the teardrop shape of the classification lights. Also, the inside of the cabs were no longer lined or insulated in the same manner as the previous classes. (Previous classes had provided better cold-weather cab insulation and were better-liked by engine crews.) They were all equipped with boosters (some shortly after being built) and all Selkirks (5900 through 5935) were built as oil burners. The tenders held 12,000 imperial gallons (55,000 l; 14,000 US gal) of water and 4,100 imperial gallons (19,000 l; 4,900 US gal) of fuel oil. They had to be equipped with two pair of six-wheel trucks because the total tender weight was 148 tons (132 long tons; 134 t).

The last Selkirks (5930 through 5935) were taken out of service in 1959. All but two of this (T1c) class were scrapped. None of the earlier T1a class or T1b class locomotives were preserved. The first (T1a class) Selkirks had a heavier-looking, non-streamlined appearance which were better examples of the heavy mountain steam-power look and their original, as-delivered rear sand-domes were removed early in their service-life. The 5935 is preserved in Delson, Quebec. The 5931 (which was repainted and intentionally renumbered incorrectly as 5934 upon initial public display near downtown Calgary) was eventually repainted and renumbered again, this time with its correct/original number, 5931. This coincided with its move and relocation to the main entrance to Heritage Park in Calgary, Alberta. All of the later T1b and T1c-class locomotives were semi-streamlined and were painted with CPR Tuscan red panels along the sides of their running boards, beneath the cab windows and on the sides of the tenders with gold leaf (originally) border trim (which was later changed to a type of yellow similar to "duluxe gold"). Some of the original T1a-class Selkirks also received this paint scheme (but with narrower panels along the sides of the running boards that widened in the middle to carry the locomotive's road number).

All the 36 Selkirk locomotives (5900 through 5935) were initially assigned to handle both freight as well as passenger trains between the major division points of Calgary and Revelstoke, a distance of 262 miles (422 km). They were also used for 23 miles (37 km) in pusher service from Revelstoke west (uphill) to the wye at Taft, assisting the road engines of both freight as well as passenger trains up the steep grade to this location. The Laggan Subdivision covered the eastern portion of their assigned territory 137 miles (220 km) and included the Field Hill and the Spiral Tunnels while the western portion of their primary, assigned territory consisted of the Mountain Subdivision which covered the remaining 126 miles (203 km) and included Rogers Pass, the Connaught Tunnel, and Stoney Creek Bridge. The grades encountered had a maximum of 2.2% (1 in 45), with curves of 12° or 480 feet (150 m) radius. Rated at 78,000 pounds-force (350 kN) tractive effort, on the lesser grades they could haul 1,050 tons (940 long tons; 950 t) unassisted and without the booster cut-in. The booster engine added an additional 12,000 lbf (53 kN) of tractive effort up to a maximum speed of 20 miles per hour (32 km/h). Due to their extreme weight, they could not proceed west of Taft to Vancouver.

When diesels began operation between Calgary and Revelstoke in the early 1950s, the Selkirks were reassigned to work the Brooks and Maple Creek subdivisions between Calgary and Swift Current, Saskatchewan. They were also used to haul freight trains north of their new Alyth terminal (located in Calgary) as far as Edmonton. At least some of the reassigned Selkirks received an "all black" (non-passenger) paint scheme without CPR Tuscan red panels and without grey or "blued" metal boiler-jackets; however, they still retained the yellow panel trim around the previous CPR Tuscan red (now black) panels (on those locomotives formerly painted with "outlined" panels).

Two of the T1c locomotives have been preserved, the 5931 and 5935, the remaining four were scrapped. The 5931 is located in the Heritage Park Historical Village in Calgary and the 5935 in the Canadian Railway Museum in Delson, Quebec.