“Crandall” Cab Locomotive
The “Crandall” cab was a type of re-purposed diesel-electric locomotive used in commuter train service. They were built from existing booster locomotives by the Chicago and North Western Railway (CNW). In all, six locomotives of this type were built.

In the late Spring and early Summer of 1973, the CNW built six locomotives from existing Union Pacific EMD E8B (2,250 hp from two 12-cylinder 567B engines) and E9B (2,400 hp from twin 567C engines) cabless booster units. EMD manufactured E8 locomotives between December of 1949 and January of 1954, and E9s between April of 1954 and January of 1964.  A booster unit, also known as a B unit or cabless unit, is a locomotive unit which does not have a driving cab or crew compartment, and must therefore be controlled from another coupled locomotive with a driving cab (an A unit).

The rebuilt units received newly manufactured cabs that included windows, controls, and space for a crew. They were designed by M.H. Crandall, the CNW's Assistant Superintendent of Motive Power (henceforth the name). The units were built in the CNW's own shops.

The E8 locomotives were also upgraded with new 2,400 horsepower EMD 567C prime movers. In addition, modern Head-End Power (HEP) replaced the older steam generators on the units for use in commuter service in both the E8 and E9 locomotives.

The new cabs were not considered aesthetically pleasing. However, by using the surplus B units, the rebuilds were an easy and economical solution during a tight financial situation for the railroad and provided the motive power that was sorely needed for their Chicago-area commuter operations.

Crew members described the units as being extremely rough-riding, loud and uncomfortable. The single-thickness Plexiglas windows installed on the sides were said to have done a poor job of keeping out the elements and noise. The cabs were not soundproofed, and the horn was mounted atop the cab. The units did have a modern control stand, a factor crews considered a plus.

The six units, numbered 501–506, were retired by the CNW in on December 31, 1977 and put into service by the RTA (now Metra). They were retired again by the RTA in the Spring of 1983, as new RTA-funded F40PH locomotives arrived. The “Crandall” cabs finally met the scrapper's torch in 1985.

Sadly, M.H. Crandall, not long after designing the new cabs, succumbed to a heart attack on a cold Chicago day while attempting to help a crew start a stalled commuter unit in which he had been a passenger on. A hand-lettered panel dedicated to his memory was installed on “Crandall” cab locomotive No. 502 while it was still in CNW yellow and green livery. This engine was seen pulling commuter trains on the Northwest Line until the early 1980s. Mr. Crandall's “Crandall” cab-designed locomotives remained in use for a decade.

Special thanks to Marty Bernard for providing the “Crandall” cab photos and other information. See more of Marty Bernard's work here:  https://www.flickr.com/photos/129679309@N05/albums 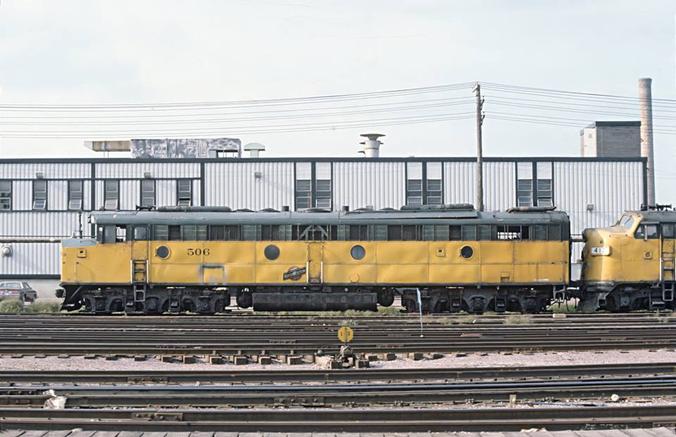 Chicago & North Western "Crandall" cab No. 506. The locomotive's boxy ancestry is apparent in this side view.  Photo by Marty Bernard. 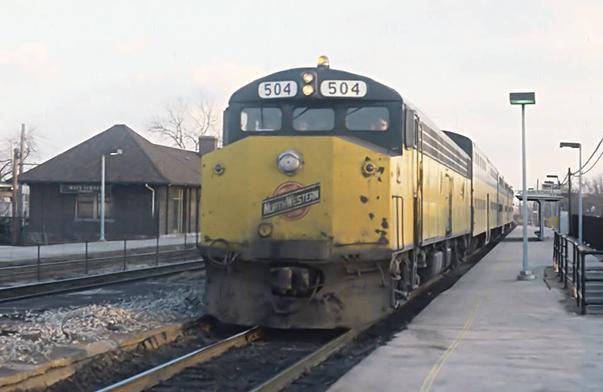