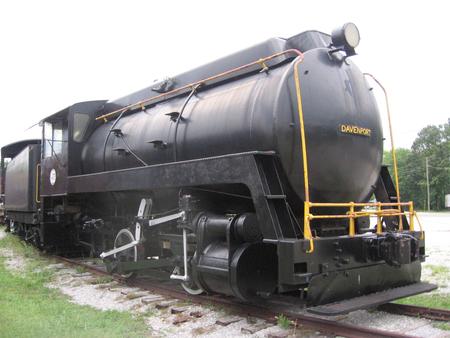 Alabama Power Company fireless locomotive No.40 built by Davenport in 1953 at the Heart of Dixie Railroad Museum.

In late 1930 Davenport was licensed to assemble and market R G LeTourneau Inc products under the Davenport-LeTourneau brand. The agreement is believed to have ended in 1935 when LeTourneau’s moved to Peoria, Illinois. Davenport also sold Davenport-Winchell three-wheel roller conversions of industrial wheel tractors, Davenport-Frink snow plows which were built in license from Frink Sno-Plows Inc and Reynolds patented Mov-Mor rotary scrapers.

In 1933 the company was again restructured and renamed the Davenport-Besler Corporation which continued in business until 1956. William George Besler was a Director at the time of the restructuring. The company acquired the locomotive business of H. K. Porter, Inc in 1950 and from then on produced Porter designs as well as its own.

The company built small steam locomotives early on; the first gasoline-fueled internal combustion engined locomotive was built in 1924 and the first diesel locomotive in 1927, a 30-ton diesel-electric for the Northern Illinois Coal Company of Boonville, Indiana.

An extensive range of diesel locomotives in all industrial sizes followed, utilizing either mechanical torque converter or electric transmission, the former for the smaller locomotives. Most were used by a variety of industrial users, but some railroads also bought Davenport locomotives, particularly of the 44-ton size, that being the largest locomotive then allowed by union rules to be operated by one man. Railroad buyers included the Rock Island, Milwaukee Road, Santa Fe, the Frisco, and the Missouri Pacific. In 1963, that rule was relaxed and railroads ceased buying industrial-sized locomotives for light switching.

Davenport built a number of locomotives for the United States Army including World War I trench railways, the USATC S100 Class 0-6-0 of World War II, and eighteen larger switchers during the 1950s, two of which were adjustable in gauge—one could operate on broad gauges up to 5 ft 6 in, and one on narrow gauges—the latter operating for a period on the Denver & Rio Grande Western 3 ft.

Various Davenport locomotives are preserved in the US as well as other parts of the world.

The Canadian Locomotive Company acquired Davenport-Besler in 1955, closing it the following year.