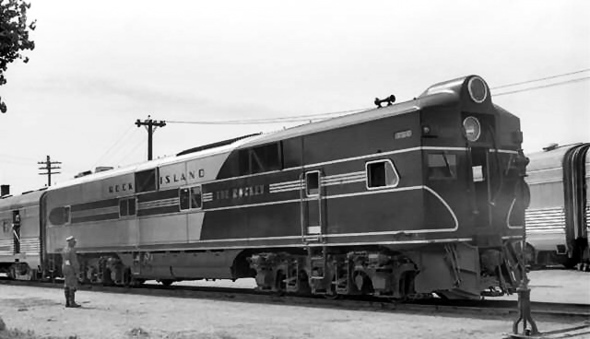 EMC AB6 Diesel Locomotive
The EMC AB6 was a type of diesel locomotive built exclusively for the Chicago, Rock Island and Pacific Railroad (the "Rock Island Line") by General Motors' Electro-Motive Corporation and delivered in June 1940. Two examples were built, numbered No. 750 and No. 751. They were built for the Rocky Mountain Rocket passenger train, which travelled as a unified train from Chicago, Illinois, to Limon, Colorado, but then divided; with one segment going to Colorado Springs, Colorado, and the other to Denver, Colorado. The Rock Island desired a locomotive that could look like an integrated part of the train during the Chicago-Limon portion of the route, but could then be operated independently to take three cars to Colorado Springs. A regular, cab-equipped A-unit could have been purchased, but that would have ruined the streamlined look of the train, so the RI had EMC build a flat-fronted locomotive based on an E-series E6B (B unit) but with an operating cab, headlight, pilot, and other features to enable it to operate as an independent locomotive.

In 1965, the units had their steam generators replaced with head-end power and were reassigned to push-pull suburban service in the Chicago area. In this form, they lasted until the mid-1970s.