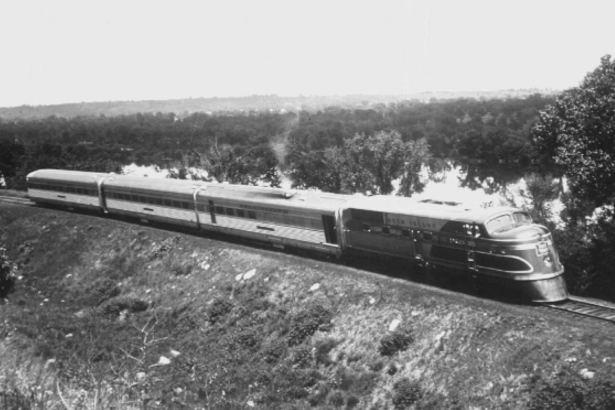 Like the other EMC locomotives of that year, the TA was constructed as a carbody bridge truss rather than having a separate chassis. This carbody was produced by EMD themselves, while previous EMC products had bodywork produced by subcontractors. EMC was determined to take all manufacturing in-house. The single Winton 201-A V16 engine was placed centrally, centered on the side door and twin flanking windows. The generator was attached behind it, with a cooling fan and air compressor after that. The rear of the unit was taken up with two steam generators for train heating and reservoirs for the air brakes. The cab sat two crew, driver on the right and fireman on the left. The sloped nose contained air brake and train control equipment; beneath them sat the batteries, and beneath the cab was the water reservoir for the train heating boilers. Fuel was carried beneath the locomotive between the trucks. The trucks were 2-axle, both axles powered, giving the locomotive a B-B wheel arrangement.

As delivered, the TAs had a single headlight, but within a few years the Rock Island added a second, gyrating headlight for additional warning at grade crossings. In the 1950s the railroad added new, larger numberboards and removed the side skirting and the rear diaphragms from most of the locomotives. Other additions included MU receptacles next to the upper headlight and replacing the retractable front couplers with fixed ones.

When the original Rocket trainsets were withdrawn from service, the TAs, unlike the power units of many early streamliners, were able to continue in service, as they were fully separate locomotives capable of hauling ordinary railroad cars. They served long second careers hauling local and suburban trains.

A builder's portrait of the EMC TA.

An EMC TA leading the Kansas City Rocket, circa 1940.

The Chicago, Rock Island and Pacific Railroad introduced its first diesel-powered streamliners, The Rocket, in 1937. The first six Rockets were three- or four-car stainless-steel semi-articulated trainsets built by Budd Company. They were powered by six identical locomotives, No. 601-606, especially built for the Rock Island by Electro-Motive Corporation. These were classified as model TA—the T indicating Twelve hundred hp, the A indicating an A unit (cab-equipped lead locomotive).

The TAs were unique in that they were the only small, lightweight streamliner motive power to be truly separate locomotives. It shared this trait with the roughly contemporary EA, E1 and E2, all built in 1937, but they were all full-size locomotives intended to pull much heavier trains, while the TAs were pocket-sized, styled to match the short, lightweight trains they hauled. 1937 was very much the year that the passenger diesel locomotive evolved from the integrated streamliner. Future locomotives would follow the direction taken by the EA, E1 and E2, full-size locomotives to pull lightweight but full-size passenger cars; the TA became the blueprint for EMC's "F" series of freight locomotives, thus proving that the concept of a separate diesel locomotive had finally and fairly decisively taken hold - and that steam was doomed.