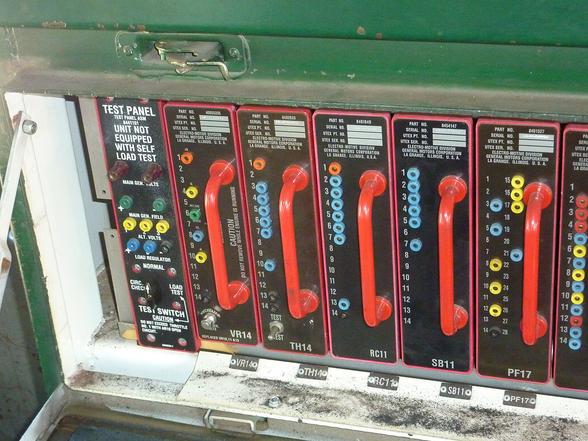 EMD Dash 2
The EMD Dash 2 is a line of diesel-electric locomotives introduced by General Motors' Electro-Motive Division (EMD) on January 1, 1972. Designations of these models were those of the former models with "-2" added (e.g., the SD40 was replaced by the SD40-2). They retained the basic specifications of the earlier models in terms of power output and most other features, but introduced a number of improvements to the locomotives' internal systems, specifically the electrical systems. These were intended to improve availability, efficiency, and ease of maintenance.

EMD Dash 2 modules.
One major improvement was a modular electrical control cabinet, allowing maintenance by unit replacement and the use of common parts. These concepts were first tested on the EMD DDA40X.

Changes
Minor externally visible changes common across the whole line include the following:

Six axle HT-C trucks with all traction motors pointing towards the center were incorporated, improving the truck's factor of adhesion and increasing each truck's overall length. Locomotive frames had to be lengthened as a consequence. These HT-C trucks were employed for the next 20 years, with the older Flexicoil C trucks remaining a seldom-selected option.

Engine water level sight glass was placed on the rear upper right-hand side of the long hood.

Battery boxes were placed in front of the cab with bolted down covers, rather than hinged.

The equipping with both high and low positions for rear classification lights, one set being blanked.

Cab roofs were extended slightly beyond the cab rear to accommodate the larger electrical cabinet.

Models
The Dash 2 line was highly successful. The models offered included the following:

While the passenger models mentioned are nearly extinct, most freight models have been retained, often being rebuilt into the functional equivalent of a GP38-2/SD38-2 or, more frequently, a GP40-2/SD40-2.

The GP39-2/SD39-2 haven't been forgotten, either, as these produce more horsepower than a 38 Series, but with less fuel consumption (an advantage of turbocharging over Roots-blown scavenging), and these also offer superior high-altitude performance, along with the fuel efficiency advantage of 12 cylinders vs. 16 cylinders.

Rebuilds
In addition, many other earlier locomotives were rebuilt to Dash 2 standards by numerous locomotive rebuilders and railroad shops.

Among the most popular rebuilds are SD40, SD45, SD40T-2 and SD45T-2 into the functional equivalent of an SD40-2, although the frame, carbody and trucks remain the same as on the "donor" locomotive. In many cases, the rebuilds are identified as, for example, an SD40-3 or an SD40M-2, or an equivalent distinguishing identification. In some cases, the locomotive is identified simply as an SD40-2, although it is clear through physical examination that it is a rebuild. Once so rebuilt, the locomotive enters the owner's fleet as if it were a true SD40-2, arguably the most versatile and reliable diesel-electric locomotive of its time, if not all-time.

Subsequent Models
Models subsequent to the Dash 2 line, for example SD50, SD60 and SD70, et al., incorporated Dash 2 improvements at the outset. In this context, the model suffix -2 is only applicable to the 40 Series, although -2 has been applied to certain variations of the later models.